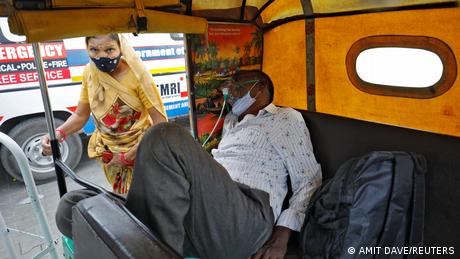 The massive surge in infection numbers has put an enormous strain on India's health system, producing heart-breaking images of people desperately searching for hospital beds and oxygen tanks to save virus-infected relatives.

Shortages of medical oxygen, beds and anti-viral drugs in several parts of the country, coupled with an increasing number of sick people, continue to overwhelm hospitals.

On Thursday, the Supreme Court likened the situation to a "national emergency" and directed Prime Minister Narendra Modi's government to prepare a national plan on oxygen supply, essential drugs and vaccinations.

In a DW interview, health expert Gautam Menon talks about the reasons behind the skyrocketing infections in India and what needs to be done to bring the situation back under control.

DW: What has contributed to this massive surge in coronavirus cases in India?

Gautam Menon: There are many factors. Negligence on the part of people and officials has led to everyone letting their guard down, possible reinfections because of a loss of antibodies and new virus variants have all contributed to the surge.

The "double mutant" variant, known as B.1.617, first detected in India's Maharashtra state, is currently the predominant one in the country and it's lethal and more infectious. There are also other variants like those first found in the UK and in Brazil that are spreading faster in the country.

Genome sequencing indicates that infections caused by the double mutant variant are on the rise across the country.

But unless we know to what extent the increase in infections can be attributed to the new variant, we will not be able to determine conclusively whether laxity in following COVID-appropriate behavior drove the surge or whether the greater virulence of the new variant is responsible.

Why is the double mutant variant more infectious and lethal?

It has two critical mutations that could lead to an improvement in the ability of the virus to bind with human cells. This makes it more effective.

The B.1.617 variant of SARS-CoV-2 carries two mutations, E484Q and L452R. Both are separately found in many other coronavirus variants, but they have been reported together for the first time in India.

What is more worrying is that this variant is showing the ability to escape the human immune system and evade antibodies created by a prior infection or by vaccination.

What needs to be done now to bring the situation in India under control?

Most hospitals across the country now have dangerously low levels of oxygen supplies. It is important that private players and industry join forces with the government to increase capacity.

Moving forward, I think state governments should act appropriately and adapt their measures to the evolving situation.

It is important to restrict gatherings in public places like shopping malls and cinema halls, among others. A nationwide lockdown to control the spread of the virus will be an extreme step and it will be economically disastrous.

Could we have prevented the current worrying situation in India?

We came to know about the new variant circulating in India in February, from reports coming out of Maharashtra. Now it has spread to many states and countries. Had we acted with more alacrity when it was first detected, we might have been able to lessen the impact.

When do you see the situation improving?

It might be difficult to predict. But given that the second wave has yet to reach its peak, I don't see the situation improving anytime before mid-May, or maybe even before the end of May.

Any improvement in the situation will also be contingent on people adhering to COVID-related restrictions and receiving vaccinations. We need to vaccinate 10 million a day if we have to achieve our target of vaccinating 300 million people by August.

How far can vaccination help given that this new double mutant variant seems to show "immune escape" behavior?

I think more study needs to be done in this regard. I am not sure if the variant seriously impacts vaccine-derived immunity. It may not.

Dr Gautam Menon is a professor of physics and biology at Ashoka University, Sonepat, Haryana.

The interview was conducted by Murali Krishnan in New Delhi. It has been edited and condensed for clarity.