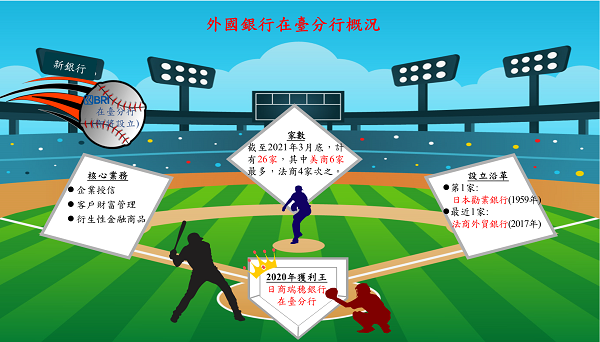 TAIPEI (Taiwan News) — After the announcement of Citibank’s planned exit from Taiwan, the Central Bank took to Facebook on Wednesday (April 21) to reveal the three most profitable foreign banks in the country.

In the post, the Central Bank first welcomed Indonesia's Bank Rakyat, a recent arrival in Taiwan, before giving an account of the history of foreign banks here as well as of their operations, assets, and profitability.

Currently, a total of 26 foreign banks from 13 countries have branches in Taiwan. Three additional Chinese banks were not included in the statistic.

The U.S. forms the largest contingent of banks with six, followed by France with four, Japan and Singapore with three, Hong Kong with two, and eight other countries each with one. The foreign banks mostly conduct credit and loan business as well as asset management in Taiwan.

In sum, the assets of foreign banks in Taiwan amounted to NT$3.37 trillion (US$11.6 billion) at the end of 2020, or 5.48 percent of the total assets of all Taiwanese banks. Japanese Mizuho Bank has the largest holdings in Taiwan among the group.

Total profit before tax in Taiwan last year for all the foreign banks totaled NT$23.8 billion, the highest amount in recent years. The most profitable member of the club is Mizuho, followed by American JPMorgan Chase Bank and French BNP Paribas.