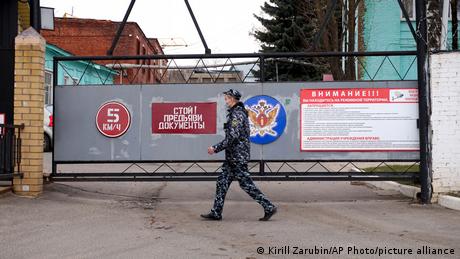 Russian authorities took into custody Alexei Navalny's spokeswoman Kira Yarmysh and Lyubov Sobol, a lawyer working for his anti-corruption fund, just hours before protests to support Navalny were set to start on Wednesday.

Police also reportedly raided apartments of activists and journalists in several cities. Several marchers were also arrested as the first rallies started in Russia's far east, according to the Open Russia opposition group. The authorities consider the planned protests to be illegal.

What has been reported about the arrests?

The news of Sobol's arrest was first reported by her own lawyer, Vladimir Voronin. A post on Sobol's Twitter account said she was being held "in a cold bus for almost two hours," with the officers refusing to give a reason for the detainment.

Kira Yarmysh, who is already under house arrest over pro-Navalny protests in January, was also detained by police near the entrance of her apartment. According to Yarmysh's lawyer, the spokeswoman is allowed to leave her home for an hour a day, and was making use of this right when approached by the police.

The arrests came hours before Russian President Vladimir Putin gave a speech in the Russian parliament. Protesters hope to overshadow his address with a wave of rallies across Russia.

Navalny's top strategist Leonid Volkov dismissed the arrests as a part of "the already traditional pre-rally histerics" on the government's part.

"As usual, they think that if they isolate 'the leaders' there will be no protests," he said on Twitter.

How is Navalny doing?

Navalny, who was poisoned with Novichok nerve agent last year, is currently hospitalized in a Russian prison. His health has deteriorated since starting a hunger strike some three weeks ago. Navalny's supporters are demanding the politician be released, and for his doctors to be given access to him.

Yesterday, Navalny's lawyer Olga Mikhailova told reporters that her client had become "very weak" and that "it's hard for him to speak and sit up."