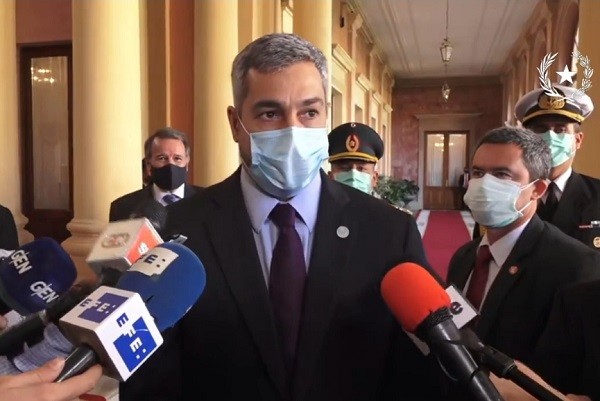 Paraguay, which has seen a spike in coronavirus cases over the past two months, has been seeking to secure vaccines as potential deals with Russia and COVAX have failed to bear fruit.

Taiwan's Ministry of Foreign Affairs (MOFA) previously cited its Paraguayan counterpart as complaining that China had used its jabs as leverage to pressure the Latin American country to drop its ties with Taiwan. The vaccine shortage led to calls from some quarters in Asuncion to drop Taipei in favor of Beijing.

Benitez on Tuesday (April 20) spoke to the press about the status of the desperately needed vaccines, saying over 200,000 are slated to arrive in the country soon.

Responding to China's offer, he said: "We have no problem buying from anywhere. Now, we're not going to accept any kind of blackmail for vaccine purchases." The leader went on to say that the country is "open to having direct dealings with factories in China without any type of conditions involving our diplomatic relations."

China denies it has attempted to lure the country with its vaccines.

Paraguay is one of Taiwan's 15 remaining diplomatic allies. Seven have been poached by China since the election of President Tsai Ing-wen (蔡英文) in 2016.

MOFA Department of Latin American and Caribbean Affairs head Alexander Yui (俞大㵢) said Wednesday (April 21) that Taiwan-Paraguay relations are stable following the arrangement of vaccine shipments. Yui further stated that his country would provide its allies with Taiwan-developed vaccines, which are expected to roll out by July after domestic demand is met.

Taipei has helped Asuncion procure 2 million doses of India's COVAXIN vaccine, with 100,000 already shipped. Benitez said the next batch of 100,000 is expected early next week and that the Pan American Health Organization has confirmed another 134,000 vaccines will arrive on April 26.

Benitez said Tuesday that he is optimistic about the number of vaccines his country is set to receive and expects "a good volume" of them by the middle or end of the year.

Paraguay is averaging 2,128 new infections per day, or 211 for every 100,000 people, Reuters reported. This is currently the third-highest rate in Latin America and the Caribbean, and the country is rapidly closing in on the peak it set just last Tuesday (April 13).

The country has administered over 87,000 vaccine doses so far, enough to cover the first dose for approximately six percent of the population.