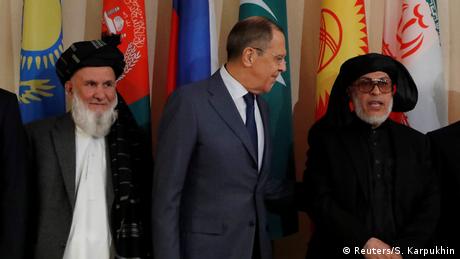 As the US military and its NATO allies prepare to leave Afghanistan after two decades, the possibility of the peace in the war-torn country hinges on a deal signed last year between the Taliban and the US.

The withdrawal carries the risk of further violence if the intra-Afghan talks stipulated in the deal between the Taliban and the Afghan government fails to produce a lasting power-sharing agreement.

Widespread civil conflict in Afghanistan would draw in regional players, and while US diplomacy will continue to play a central role, Russia will be paying closer attention to instability and a power vacuum on its southern doorstep.

Katharyn Stoner, deputy director of the institute of international studies at Stanford University, told DW that Moscow is concerned about the possibility of Islamist-inspired terrorism spreading from Afghanistan into former Soviet states in Central Asia.

"Their interest would be stability. So, if that means working with Pakistan or with India, Russia will do it," Stoner said, adding that Moscow's doesn't particularly care about the form of government in Afghanistan as long as its interests are unaffected.

In 2001, when US invaded Afghanistan, Russia was forced to watch a major US troop presence build on its southern border. Experts agree that Moscow is relieved at the US withdrawal.

Stoner said continued American diplomatic presence in Kabul may come with a "small military presence and a groundwork staying in place for redeployment of some multinational force should Afghanistan descend again into chaos."

Although the US and Russia are both interested in keeping Afghanistan from falling into civil war, Moscow is unlikely to overtly support any continued NATO presence in the country.

Johnny Walsh, a senior expert on Afghanistan at the United States Institute of Peace, told DW that Moscow would like to keep the Afghan state afloat and prevent instability that could lead to a refugee crisis.

For Russia, this means working with regional powers to ensure stability in the region and to keep the US at bay. Experts say this may result in a strong Russian influence in Afghanistan after the US departure.

"This is fundamentally a conflict among Afghans, and Afghans must decide how to end it. But the regional powers are influential," Walsh pointed out.

Walsh said that Washington isn't "thrilled" about Moscow's ties with the Taliban, although the US has encouraged Russia to use its clout to press the Islamist group toward a political resolution.

Russia doesn't care much about human rights issues, and that makes Russia an attractive partner for the Taliban, according to Stoner.

The Soviet Union invaded Afghanistan in 1980s and fought a decade-long war with local Islamist militants, called the "Mujahideen," who were backed by the US and Pakistan.

"After the Soviet withdrawal from Afghanistan in the late 1980s, the Russian-backed regime could not stay in power for more than two years. A civil war followed, with different regional players – Pakistan, Russia, Iran and India – getting involved," Faiz Muhammad Zaland, a lecturer at Kabul University, told DW.

Stoner is of the view that Moscow will now take a "business approach" and will make sure the Taliban won't pose a threat to Russia.

Despite their political differences, Washington and Moscow share some common interests in Afghanistan.

Both countries are interested in stemming the outflow of narcotics from Afghanistan. Afghan narcotics make their way to Central Asia and Eastern Europe, creating problems for Russia.

Walsh is of the view that the US and Russia agree that Afghanistan should be stable and peaceful, and on this point, they are already cooperating.