TAIPEI (Taiwan News) — Typhoon Surigae is projected to come closest to Taiwan on Thursday (April 22), when it will bring some rain to eastern Taiwan, while the country should see more rain over the weekend as a cloud system arrives from the north.

Meteorologist and CEO of WeatherRisk Explore Inc Peng Chi-ming (彭啟明) on Tuesday (April 20) predicted that Surigae will come closest to Taiwan on Thursday, when it will bring rain to eastern Taiwan spanning into Friday (April 23). After the typhoon moves eastward, a cloud system is expected to shift south from China and bring more precipitation from Sunday through Monday (April 25 to 26).

Peng said that as of Tuesday morning, Typhoon Surigae was 910 kilometers southeast of Taiwan's southernmost point of Eluanbi, moving northwest at 11 kilometers per hour (kph). The typhoon has a radius of 280 km and is packing maximum sustained winds of 183.6 kph, with gusts of up to 226 kph, according to the Central Weather Bureau (CWB).

Peng estimated that by Thursday, Surigae will be 500 to 600 kilometers southeast of Taiwan, and its storm circle will be 200 to 300 kilometers away. He said although the typhoon is unlikely to impact Taiwan head-on, large waves are still to be expected along the southeast coast over the coming days. According to Peng, the periphery of the storm on Thursday will likely bring rainfall to eastern Taiwan. However, he forecast sunny skies and stable conditions for western Taiwan during this period.

As the typhoon begins to spiral away from Taiwan on Friday (April 23), Peng said a cloud system will shift south into the country from China. He asserted that this cloudy weather will bring more moisture over the weekend and linger over the country from Sunday to Monday, increasing the odds of rain during that period.

He said that this typhoon and cloud system will probably not bring much drought relief over the coming days. Nevertheless, given that Taiwan has seen very little in the way of precipitation in April, this weekend could bring the most rain seen so far this month.

Generally, temperatures will follow this pattern over the coming days, warming especially when the typhoon is closest to Taiwan on Thursday, at which time conditions will feel "muggy," according to Peng. 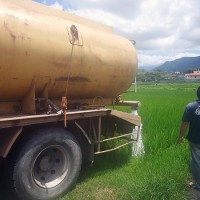 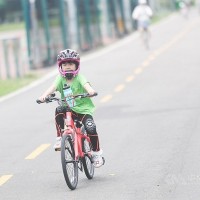 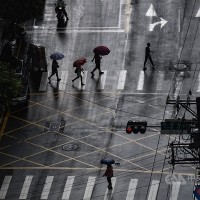