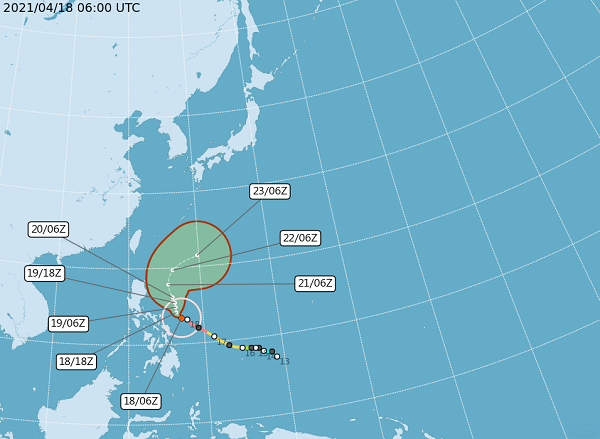 TAIPEI (Taiwan News) — The outer system of Typhoon Surigae is expected to bring rain to eastern Taiwan on Thursday (April 22), but no drought relief is in store for the longsuffering western areas south of Taoyuan, meteorologist Daniel Wu (吳德榮) said today (April 18).

According to the Central Weather Bureau (CWB), as of 6 a.m. on Sunday, Typhoon Surigae was located at 13.4N and 127.1E, moving northwest at a speed of 9 km per hour with maximum sustained winds near the center at 55 meters per second.

Wu said Typhoon Surigae is moving northwest towards the sea off the east coast of the Philippines and will be fully developed by tomorrow. He added that its intensity will gradually decrease on Tuesday (April 20), though winds will remain strong, CNA reported. On Wednesday, the typhoon will move north by northeast, and its intensity will further decrease.

As threatening to Taiwan as the typhoon may seem, the barrier of the Central Mountain Range will result in variability of rainfall between the east and west, Wu said. The outer system of the typhoon will bring rain to the east on Thursday, while the west is expected to remain dry.

Wu said the weather will be dry Sunday and Monday, with mostly cloudy conditions expected across the country. Temperatures will be comfortable to slightly hot for the north and east but relatively hot for central and southern regions during the day.

Hot daytime weather is expected across Taiwan on Tuesday and Wednesday. Eastern Taiwan will begin to receive occasional showers on Wednesday, and rain will arrive on Thursday, while the west will be mostly hot and cloudy during the day, Wu said.

On Friday, afternoon showers are expected in the east and in mountainous central and southern regions, while western Taiwan is expected to see mostly cloudy skies and slightly lower temperatures in the daytime.

The weather will become unstable next Saturday (April 24) and Sunday, bringing an as-yet-unforeseeable amount of rain, the meteorologist said.