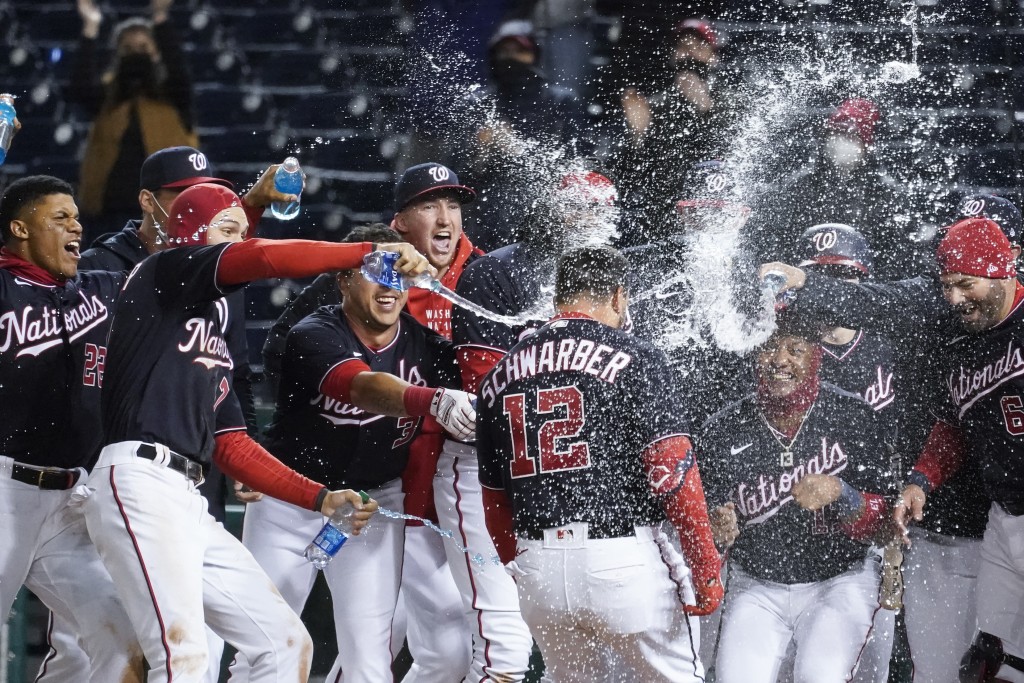 The lefty-batting Schwarber connected on a 2-1 pitch from left-hander Alex Young (0-3), sending a drive to right that traveled an estimated 463 feet for his first homer for Washington.

Scherzer, a three-time Cy Young Award winner, struck out the side in the seventh while passing Cy Young to move into 22nd place on baseball’s strikeout list. He finished with 10 on the day, giving him 2,808 for his career.

The young, athletic Rays spurted to an 8-0, seventh-inning lead and beat the Yankees for the 16th time in their last 21 meetings, including during last year’s Division Series. New York walked seven Rays, had just three hits, struck out 14 times and made three errors that led to three unearned runs.

The game was stopped for about 2 minutes, 15 seconds with Clint Frazier batting in the bottom of the eighth when about a half-dozen balls were thrown on the field from the pandemic-limited crowd of 10,202 on a cool, breezy night with a 45-degree temperature at game time.

Michael Wacha (1-1) lowered his ERA from 7.00 to 4.20, allowing one hit in six scoreless innings with nine strikeouts and two walks.

Eflin (1-0) allowed six hits, struck out six and walked none in seven-plus innings. The lanky right-hander retired 12 straight batters at one point and exited after surrendering a two-run homer to Justin Williams in the eighth.

The Phillies jumped ahead 6-0 in the second with their biggest inning of the season. Nine straight batters reached safely after Martinez got the first out.

CHICAGO (AP) — Kyle Wright plunked four Chicago batters but still left with the lead after a last-minute call-up, and Will Smith stranded the bases loaded in the bottom of the ninth inning for Atlanta.

Wright was recalled from the club’s alternate site to replace Drew Smyly, who was scratched and placed on the 10-day injured list with left forearm inflammation Friday morning. Wright hit four batters, including Javier Báez twice, but limited Chicago to two runs and three hits over 4 1/3 innings. He also doubled for his first career hit.

Four relievers, including winner Josh Tomlin (2-0), kept the Cubs scoreless until Smith entered for the ninth. Atlanta’s closer walked the bases loaded with two outs before striking out Joc Pederson to cap his third save in three tries.

Willson Contreras homered off Wright as the Cubs lost their second straight and fifth of six. The first four runs came off Chicago starter Zach Davies (1-2).

Anthony Bass (1-2) pitched a perfect eighth and Yimi García closed with a scoreless ninth for his third save.

No. 9 hitter Freddy Galvis had two extra-base hits and scored twice for the Orioles, who improved to 5-2 on the road this season. They were 1-6 in their first homestand, and had to play two doubleheaders against Seattle in the previous three days after a couple of postponements.

A week after getting no-hit by San Diego Padres right-hander Joe Musgrove, the Rangers didn’t have a hit off López (1-2) until David Dahl and Nick Solak started the fifth with back-to-back homers. Those were the only hits allowed by López, who had given up 11 runs over 8 2/3 innings in his first two starts.

César Valdez, the fourth Baltimore reliever, worked around two baserunners in the ninth for his third save in four chances.

Jeff Hoffman (2-1) gave the Reds another solid start, surrendering just a run and seven hits through six innings and helping himself with a looping RBI single in the third. Nick Castellanos homered in the sixth inning for the Reds, who struck first in the weekend battle of Ohio.

Indians starter Logan Allen (1-2) didn’t make it out of the third inning. He gave up five runs on three hits, but reliever Phil Maton surrendered the big hits to Suárez and Votto before getting out of the inning.