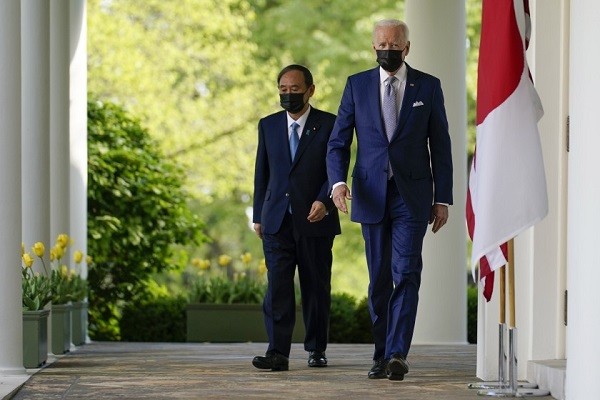 TAIPEI (Taiwan News) — Following the meeting between U.S. President Joe Biden and visiting Japan Prime Minister Suga Yoshihide Friday (April 16), they issued a joint statement stressing the importance of peace in the Taiwan Strait at a time when China is menacing Taiwan with regular military exercises.

The meeting was Biden's first in-person meeting with a foreign head of state since taking office and was in line with the U.S. administration's efforts to rally its partners in the Indo-Pacific to counter China's growing influence in the region. Notably, the statement was the first issued by leaders of the two countries to mention Taiwan since 1969.

At the press conference following Friday's talks, Biden said the two would cooperate to meet the challenge posed by China, problems in the East and South China seas, and North Korea. The intention is "to ensure the future of a free and open Indo-Pacific."

The White House later published a joint statement on shared concerns and areas where Japan and the U.S. would work together. On Taiwan-China tensions, it read simply: "We underscore the importance of peace and stability across the Taiwan Strait and encourage the peaceful resolution of cross-Strait issues."

Asked at the press conference whether he had told Biden what Japan would do if there was a "contingency" in the Taiwan Strait, Suga replied that sharing details was not possible since they involve "diplomatic exchanges." He went on to state that cross-strait stability is important to both the U.S. and Japan and that this "has been the agreement between the two countries."

On Thursday (April 16), an unnamed senior administration official hinted at Tokyo's preference to tread lightly in regard to Bejiing, acknowledging how interconnected the two are economically and commercially. However, the expected joint statement serves as a "clear signal" that Chinese actions in the Taiwan Strait, such as flying warplanes into Taiwanese airspace, are "antithetical to the mission of maintaining peace and stability," according to the official.

Taiwan's Ministry of Foreign Affairs on Saturday (April 17) expressed its thanks for the statement, stressing that it shares with the two nations the values of "freedom, democracy, human rights, and the rule of law." It pointed to Taiwan's position in the strategically important "first island chain" and said the island country plays a crucial role in the "stability and property" of the region.

Japan was the first country to be visited by American Secretary of State Antony Blinken and National Security Advisor Jake Sullivan on their trip to shore up U.S. alliances in the Asia-Pacific, participating in 2+2 talks with their counterparts in Japan and South Korea. In addition, Suga and Biden joined prime ministers Narendra Modi of India and Scott Morrison of Australia virtually at last month's "Quad" summit and discussed the China question, pandemic response, and other issues of shared concern.

Suga and Biden also reportedly discussed diversifying their critical supply chains and pursuing a US$2 billion joint initiative to promote 5G networks and compete with those built by China telecoms giant Huawei. This would be in addition to initiating joint research in fields such as AI, quantum computing, and genomics.

Before meeting with Biden at the White House, Suga paid a visit to Vice President Kamala Harris. Biden and Suga also held talks with top American officials and Cabinet members after their meeting.