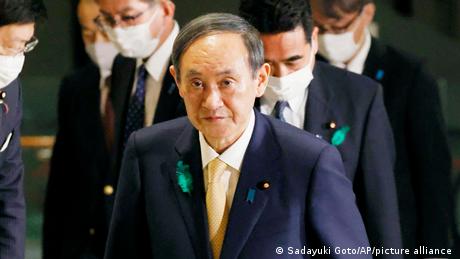 Japanese Prime Minister Yoshihide Suga will become the first foreign leader to meet US President Joe Biden when he visits the White House in Washington, D.C. on Friday, underlining the importance both sides place on the trans-Pacific alliance.

The two leaders have a number of pressing issues on their agenda, not least the upcoming Tokyo Olympic Games, the crippling worldwide shortage of semiconductor chips, human rights concerns and the threat posed by North Korea's missiles and nuclear weapons.

But their discussions will inevitably circle back to one overarching area of concern: China.

"I think it's important — and significant — that Suga is the first foreign leader to meet Biden face-to-face and I think there will be high hopes on both sides that this will help to further cement the bilateral relationship," Hiromi Murakami, a professor of political science at the Tokyo campus of Temple University, told DW.

"I'm sure they will talk about trade, the coronavirus and environmental issues, but China is going to be the key issue for both sides," she said.

Both Tokyo and Washington have repeatedly expressed concern over Beijing's aggressively expansionist policies in the Indo-Pacific in recent years, particularly as there are no indications that China has any intention of ratcheting down geopolitical tensions in the region.

Chinese forces continue to occupy atolls and reefs in the South China Sea that are claimed by a number of other nations, including Vietnam, the Philippines and Malaysia.

The latest flashpoint in the dispute revolves around Whitsun Reef, an outcrop that is within the Philippines' territorial waters but where hundreds of Chinese fishing boats are anchored. Despite demands from Manila that the vessels leave the largest reef in the Union Banks archipelago, there appears to be no indication of the ships leaving.

China has also become embroiled in disputes with South Korea and India over territory, while it is becoming increasingly belligerent towards Taiwan, which Beijing views as a renegade province that will sooner or later be incorporated into a greater China, by force if necessary.

Japan has its own territorial concerns with China, with both sides claiming sovereignty over a chain of uninhabited islands in the East China Sea.

The disputed islets known as the Senkaku by Tokyo and the Diaoyu by Beijing are currently being administered by Japan.

Beijing, however, insists that the archipelago is historically Chinese territory.

And in recent years, China Coast Guard ships and aircraft have deliberately entered the waters around the islands and ignored demands from Japanese authorities to leave.

"Suga is going to want Biden to reiterate that the Senkakus are covered by the US-Japan security agreement, even though Biden administration officials have already stated that clearly since he was sworn in," Murakami said. "For Japan, it never hurts to have that position clearly stated again."

Robert Eldridge, director of Northeast Asia for the Global Risk Mitigation Foundation, is less sure and says that Japan repeatedly asking the US to reiterate its support makes the security agreement look "weak."

"It has been stated repeatedly that the Senkakus are under the agreement, but to keep asking for the same thing every time these officials meet tells the world that the security pact is not reliable or strong," he told DW.

Eldridge, who is a former political adviser to the US Marine Corps in Japan, proposes that Tokyo and Washington adopt a more proactive approach to security in the East China Sea, including by resuming the use of a military bombing range in the Senkaku Islands for the US forces.

In return, Biden may exert pressure on Tokyo to play a larger role in the security of the region and to enlarge its military forces.

Japan has in recent years certainly taken a bigger role in the diplomatic and geopolitical situation in the region and is today one of the four members of the Quadrilateral Security Dialogue, or the Quad, with the US, Australia and India.

Tokyo has also been providing developing nations in Southeast Asia with military equipment, such as patrol boats, on top of the official development assistance that it has traditionally provided.

It is similarly working hard to build new security and trade alliances with countries that are further afield, including Great Britain, France and Germany, all of which have committed to sending military units to East Asia this year.

A 'show of unity' by Suga and Biden

Eldridge anticipates that Suga and Biden will want to put on a firm "show of unity" in their first meeting and the joint statement that is released after the conclusion of their discussions will reiterate the two nations' shared commitment to a "free and open" Indo-Pacific region, democracy, human rights and a rules-based international order - all of which could be seen as pointed criticisms of China.

But there will also be a degree of the two leaders trying to get a better grasp of each other.

"There is suspicion on the US side about just how committed Japan is in dealing with China, in light of its deep economic ties, while the Japanese side will be concerned about whether Biden intends to continue [former President Donald] Trump's approach to Beijing," Eldridge said.

"The rhetoric has been there from Biden, that he will be tough, but not everyone trusts that rhetoric," he noted, pointing out that the administration of Bill Clinton started out in 1993 being "harsh" on Beijing, "but ended up being very close to China in the end."

Tokyo has a long memory and will hope that another Democrat president will not follow a similar path.