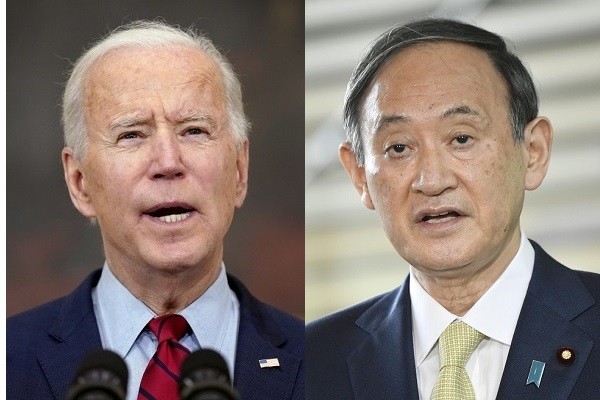 TAIPEI (Taiwan News) — The Biden administration is reportedly pushing Japan's Prime Minister Suga Yoshihide to issue a joint statement in support of Taiwan during Suga's visit to the White House.

On Friday (April 16), Suga will become the first foreign leader to meet President Joe Biden in person since he took office in January. The focus of Suga's trip will be a summit to fortify the U.S-Japan alliance as part of Biden's bid to team up with allies to counter China.

In advance of the meeting, four sources familiar with the matter have told the Financial Times that the White House wants Taiwan to be included in a joint statement issued by the two leaders. It would the first time American and Japanese heads of state have jointly issued such a statement since Sato Eisaku and Richard Nixon in 1969, when Sato stressed that Taiwan's security was "also a most important factor for the security of Japan."

During the U.S.-Japan 2+2 meeting on March 16, U.S. Secretary of State Antony Blinken and Defense Secretary Lloyd Austin joined Japanese Foreign Minister Motegi Toshimitsu and Defense Minister Kishi Nobuo in issuing a statement that "underscored the importance of peace and stability in the Taiwan Strait." On March 30, Nikkei Asia reported that Biden and Suga were planning to issue a statement that also emphasizes the "importance of stability in the Taiwan Strait."

With the coming White House summit, the Biden administration is reportedly hoping to build on progress made in March and raise the level of Japan's public support for Taiwan's security to the level of prime minister. However, Japanese officials are reportedly at odds over whether to include an official mention of Taiwan during the summit.

Some Japanese officials believe that the statement issued in March already demonstrates adequate public backing for Taiwan and that additional references would agitate Beijing. Others feel that Japan should stand with its American ally.

Japan is trying to balance the need to support Taiwan's security with its desire not to disrupt trade ties with Beijing. Tokyo is also concerned about diplomatic incidents as it tries to pull off the beleaguered 2020 Olympic Games.