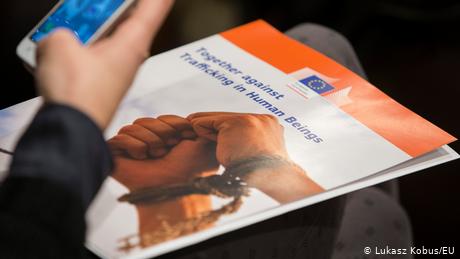 The European Commission published its Strategy on Combating Trafficking in Human Beings on Wednesday, laying out its plan to tackle human trafficking over the next five years.

The EU wishes to strengthen its response to the criminal industry, which rakes in billions of euros each year through the exploitation of tens of thousands of victims, according to a statement by the Commission.

"Trafficking in human beings is a crime that should have no place in our societies. Yet criminals continue to traffic victims, mainly women and children, and mostly for sexual exploitation," Home Affairs Commissioner Ylva Johansson said.

Commission Vice President Margaritis Schinas said one of the goals was to "empower victims of this abominable crime."

How will the EU combat human trafficking?

The Commission is taking a multipronged approach that would include changes in legislation, policy and operational support and funding.

EU authorities aim to strengthen rules against industries used by traffickers in order to reduce demand.

They also hope to crack down on online platforms that offer services, as well as to further training for law enforcement to better break the business model behind trafficking.

A focus will be on protecting victims, especially women and children, through support programs and training to help detect victims.

The European Union will also advance international cooperation to combat the problem in the countries of origin — half of all victims found in the EU are non-EU citizens.

Women and girls are the main victims

The Commission also tweeted in support of the publication, saying the strategy was proposed to fight "abominable crime."

An infographic shared by the Commission on Twitter added that women and girls make up 92% of the victims of sexual exploitation in the European Union.

A second tweet pointed out that the number of convictions and prosecutions of traffickers in the European Union remains low.

The statement connected the issue of trafficking with organized crime, adding that the European Union also presented its Strategy to Tackle Organized Crime on Wednesday.

It also predicted that exploitation would increase and that the pandemic has likely made conditions worse.