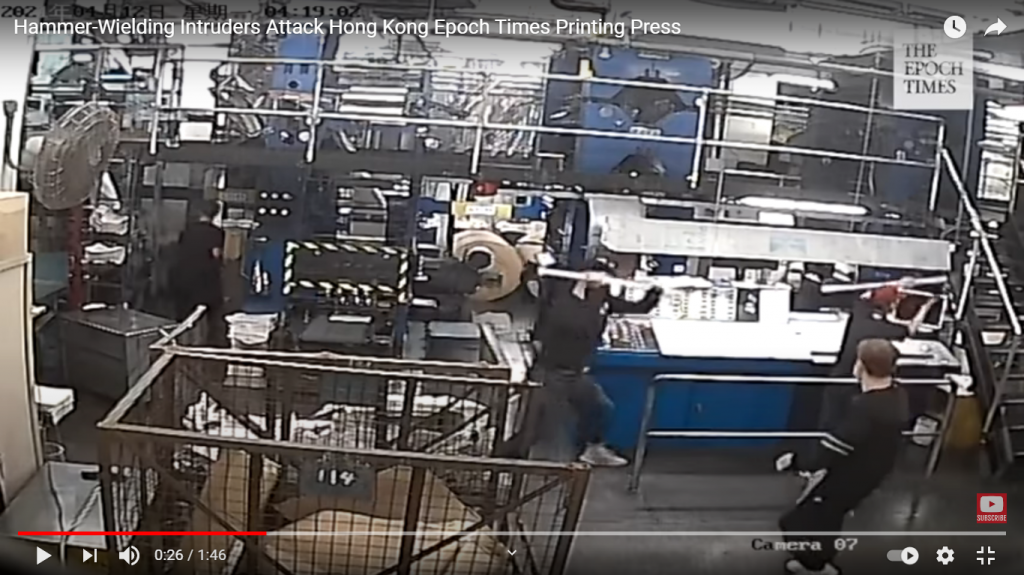 TAIPEI (Taiwan News) — The printing plant of The Epoch Times newspaper in Hong Kong was attacked by four masked men on Monday (April 12), resulting in significant property damage and heightening the atmosphere of intimidation against the city’s press.

At around 4:30 a.m. on Monday, four armed intruders entered the plant, threatening staff with sledgehammers and a knife. The men proceeded to destroy and steal computer equipment as well as pour a concrete mix into the printing press, according to the Committee to Protect Journalists (CPJ).

“It is none of your business. Go away. Don’t force me to do anything,” one of the vandals reportedly told a staff member, per The Epoch Times.

The perpetrators fled in a white van before police arrived. Surveillance footage of the incident was captured on CCTV.

An affiliate of the Falun Gong religious movement, the U.S.-based news organization is known for its intensely critical coverage of the Chinese Communist Party (CCP).

Cheryl Ng, spokesperson for The Epoch Times in Hong Kong, said the attack was characteristic of the CCP’s attempts to silence its critics. She added that the paper is unbowed and will continue to publish once the damage is repaired.

A U.S. State Department spokesperson condemned the attack and urged the Hong Kong authorities to investigate, according to the newspaper.

While no one was injured during Monday’s break-in, the event mirrors four similar attacks on the printing plant, including one property destruction incident in 2006, two attempted intrusions in 2012, and a 2019 episode in which four men set fire to the plant.