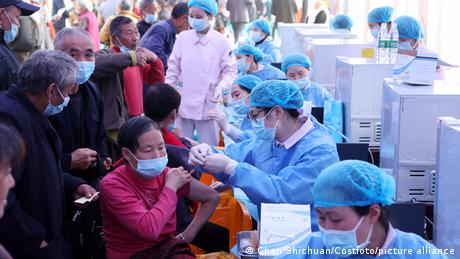 As countries around the world try to combat the latest wave of coronavirus infections by expanding vaccine access, China is trying to boost its vaccination rate through a combination of rewards and punishments.

As of April 11, Beijing had administered 167.3 million doses of vaccine across the country but that's still far from the goal of vaccinating 560 million people, or about 40% of the population, by the end of June.

Different cities and institutions have deployed different tactics to reach that goal. In some, citizens can get freebies for getting vaccinated, in others, teachers have asked parents to share whether they have been vaccinated, and in extreme cases, private companies have forced employees to get the jab or be fired.

In the southern industrial hub of Shenzhen, for instance, banners hang across major streets with slogans calling on citizens to get vaccinated and in one case, a teacher reportedly pressured parents to share their vaccination status in a WeChat group. "As long as you don't have any special physical conditions, everyone needs to get vaccinated," a woman with the surname Lee, told DW.

Lee, who works at a public hospital in Shenzhen, said most of her colleagues weren't told what vaccine they had been given. She says she was personally able to avoid getting the vaccine by showing proof that she had a medical condition preventing her from doing so. However, she says that in some cases, workers at private companies were threatened with loss of employment if they didn't get vaccinated.

"My friend's company told her last month that if she didn't get vaccinated she would be fired but she was breastfeeding her newborn baby at the time," Lee said. "For most people, even if they want to avoid being vaccinated with one of the Chinese vaccines, they still have to do it eventually, because no one can handle the pressure coming from the government."

In Wuhan, the initial epicenter of the coronavirus outbreak, local citizens have been lining up to get vaccinated over the last few weeks, sources told DW. While many people are doing so voluntarily, others say information about the jab is strictly censored and citizens have few opportunities to learn about the situation in countries that have inoculated many of their citizens with the Chinese vaccine.

"Many people in Wuhan only know that some countries have been receiving vaccines from China but they don't know whether the vaccines have been effective in reducing the number of confirmed cases after the rollout began," a man with the surname Lin, told DW. "In Wuhan, everyone is given the Sinopharm vaccine but in neighboring towns some are being given the Sinovac vaccine."

Safety a major source of concern

Some Chinese citizens have cited concerns over safety and efficacy as grounds for refusing vaccination. On April 11, China's leading disease control official said existing vaccines in China offered a low level of protection and that mixing different vaccines was one of the strategies being considered to boost their effectiveness.

"We will resolve the issue of vaccines not having very high protection rates," said Gao Fu, the director of the Chinese Center for Disease Control and Prevention. "It's now under formal consideration whether we should use different vaccines from different technical lines for the immunization process."

Gao later told the Global Times, a Chinese state-run tabloid, that his comments had been completely misinterpreted by the international community.

Jason Wang, director of the Center for Policy, Outcomes and Prevention at Stanford University in the United States, told DW that China is using a "carrot and stick" strategy to get more citizens vaccinated. However, he believes that the most effective way to boost inoculations would be to address the root causes of people's hesitancy.

On the other hand, China has launched an aggressive "vaccine diplomacy" program over the last few months, supplying millions of vaccines to countries in several parts of the world. Still, countries like Chile, which has vaccinated a large portion of its population with Chinese jabs, are experiencing a new wave of infections.

While some Chinese citizens are loath to get vaccinated due to safety concerns, others say the relatively low efficacy of Chinese coronavirus vaccines is not really an issue. One thing that seems to have convinced many people to get the jab is the fact that large parts of the country haven't reported any new cases in months.

"I think most of China is now virus-free. As long as I can thoroughly follow the prevention protocols, I'm not worried about being infected," a Beijing woman with the surname Liu, told DW.

"Most people around me are getting vaccinated voluntarily and some have decided to do so as they worry that not being vaccinated could affect their ability to travel to other countries in the future. As for those who remain skeptical, the government hasn't forced them to get vaccinated yet."

China's state-run Xinhua news agency reports that major vaccine manufacturers in the country have all increased manufacturing capacity and Gao Fu says China aims to vaccinate 70-80% of its citizens between the end of this year and the middle of next year.

But experts say that won't help unless other countries vaccinate the majority of their population with effective vaccines, too.

"Otherwise, once the border is open, it's like opening up a can of worms, people coming from the outside start to infect citizens and they have to start all over again," said Wang.

The full names of some sources have been omitted due to the sensitive nature of the topic of vaccines in China.