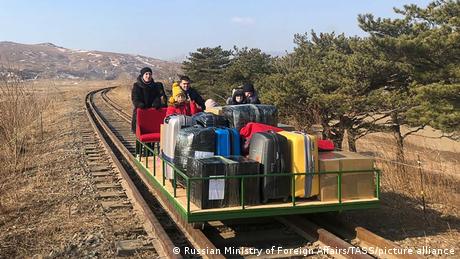 North Korea was one of the first countries in the world to effectively seal its borders with the outside world in January 2020, as the COVID-19 pandemic spread around the world.

Now more than a year later, while the coronavirus situation in North Korea remains unclear, various media reports outside the country indicate the North Korean people are suffering both from the economic impact of lockdown measures, and from the virus itself.

Reporting on North Korea involves a necessary piecing together of bits of information from which a clearer depiction of reality may be drawn. Pyongyang does not permit free speech, so it is tough to find out what exactly is happening in the country.

Regarding the current circumstances, "The truth is we don't know … there aren't sources — independent sources — inside the country such as humanitarian or embassy workers," as before the outbreak, Colin Zwirko, of the Korea Risk Group and NK News, told DW.

In reports to the World Health Organization, North Korea claims to not have any cases of COVID-19 out of the 43,052 people who have been tested so far.

Still, there is little doubt among experts that North Korea has suffered at least some cases of the virus, as there are increased reports of pneumonia and respiratory infections which have symptoms resembling those of COVID-19.

But coming to an accurate depiction of the scale of the spread of the virus in North Korea is virtually impossible.

There are some unconfirmed reports of the spread of COVID-19 in North Korea. Unnamed "official" sources inside North Korea's North Hamgyong Province, told US government-funded Radio Free Asia (RFA) that about 5,400 people have been diagnosed as suspected COVID-19 patients and more than 10 people have died after showing the symptoms.

Similarly, unnamed "official" sources in the North Korean city of Rason, near Russia, told RFA in March of around 6,000 cases and dozens of deaths of people showing COVID-19 symptoms.

Pyongyang has consistently taken extraordinary measures to contain the spread of the virus into and throughout the country, with reportedly grim consequences.

The United Nations says North Korea is suffering serious negative effects from the pandemic and the economic impact of the country's self-isolation. The special rapporteur on human rights in North Korea, Tomas Ojea Quintana, in a report for the United Nations Human Rights Council in Geneva, outlined increases in the numbers of children and elderly begging … "deaths by starvation," and "executions."

Kim, the professor, said that trade with China has been reduced by 95%, leading to reports of scarcity of foodstuffs and basic necessities not only in the poorer regions of the country but also in the capital Pyongyang.

North Korea's underdeveloped healthcare sector would not be able to cope with a serious outbreak of the virus.

North Korea has adopted an extraordinarily strict, some even say paranoid, strategy toward preventing the virus from entering and spreading in the country. Most recently, Pyongyang decided not to send a team to the 2021 Tokyo Olympics, largely out of fear of COVID-19.

After the pandemic began, the government also quickly restricted the movements of the diplomatic community to Pyongyang, and within Pyongyang, pointed out NK News' Zwirko.

The last confirmed flight from North Korea to a foreign destination was in March 2020.

Since that time any foreigners, including humanitarian workers and embassy officials, have had to cross by a land border often using extraordinary means.

North Korea does not want a train or bus to carry people across the border and then return, bringing the virus, so people have had to arrange their own transport, sometimes a cart, to ferry their belongings out of the country.

"They do not want people bringing anything back into the country," said NK News' Zwirko.

Only nine foreign embassies in Pyongyang remain open with a total of less than 290 foreigners in North Korea, according to the Russian embassy, adding that the country's measures are "unprecedented in their strictness, [with] the extreme shortage of necessary goods, including drugs, [and] the lack of [the] ability to solve health problems."

Zwirko noted that there are "no delegations … few embassy officials … no humanitarian workers."

In March this year, North Korea adopted the "Law on Disinfection of Imports," and has constructed disinfectant facilities near border crossings, which are expected to be put in use when North Korea reopens trade.

The reopening is also expected to enable the completion of Pyongyang General Hospital, which was scheduled to be finished last October, said Jeong.

Some observers expect that North Korea may soon open its border with China, at least for freight.

RFA reports inspectors being spotted at new quarantine facilities set up in Dandong and Sinuiju, on either side of the China-North Korea border. But only when Pyongyang reopens the country and allows broader access for humanitarian workers and the diplomatic corps, will the true toll of the COVID-19 pandemic in North Korea come to light.