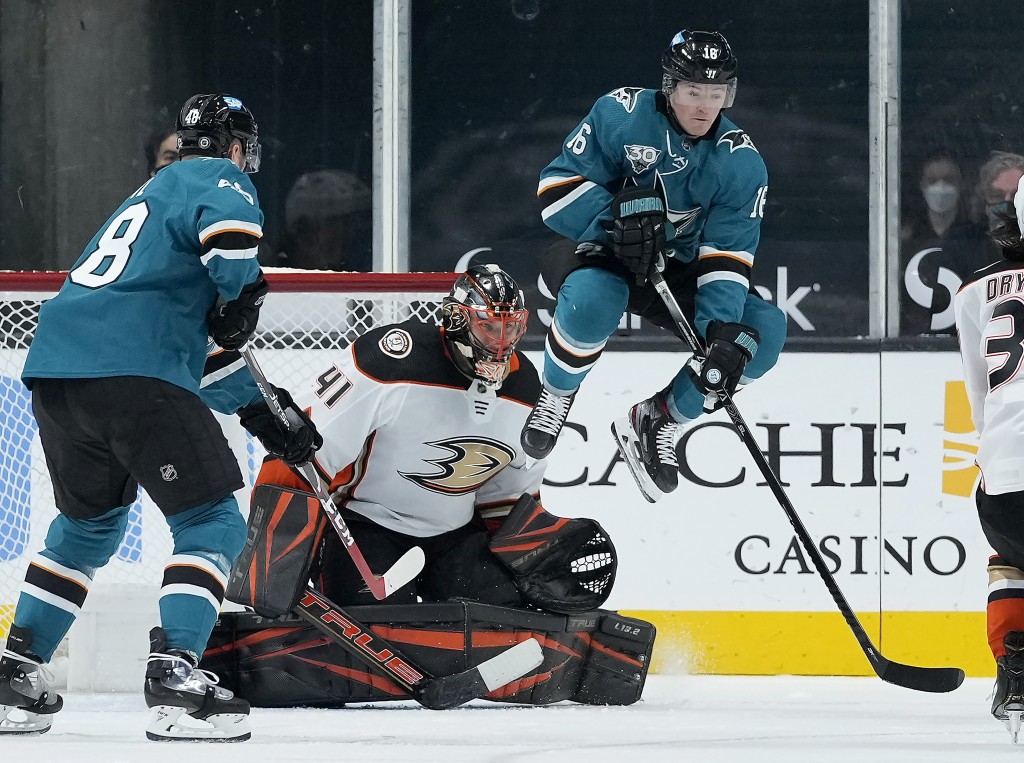 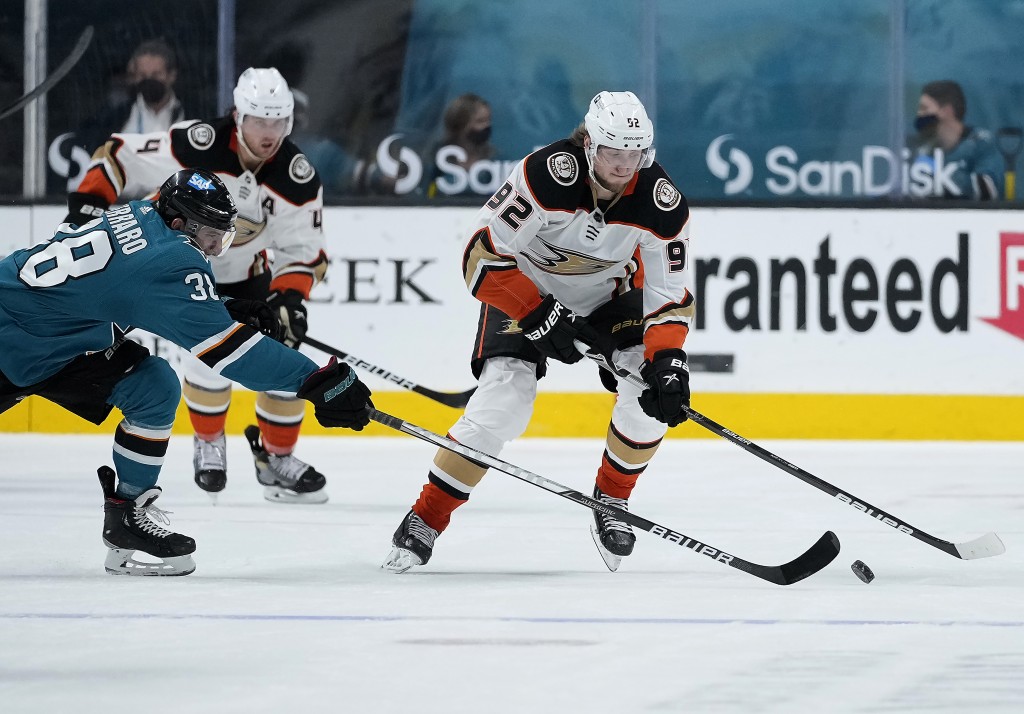 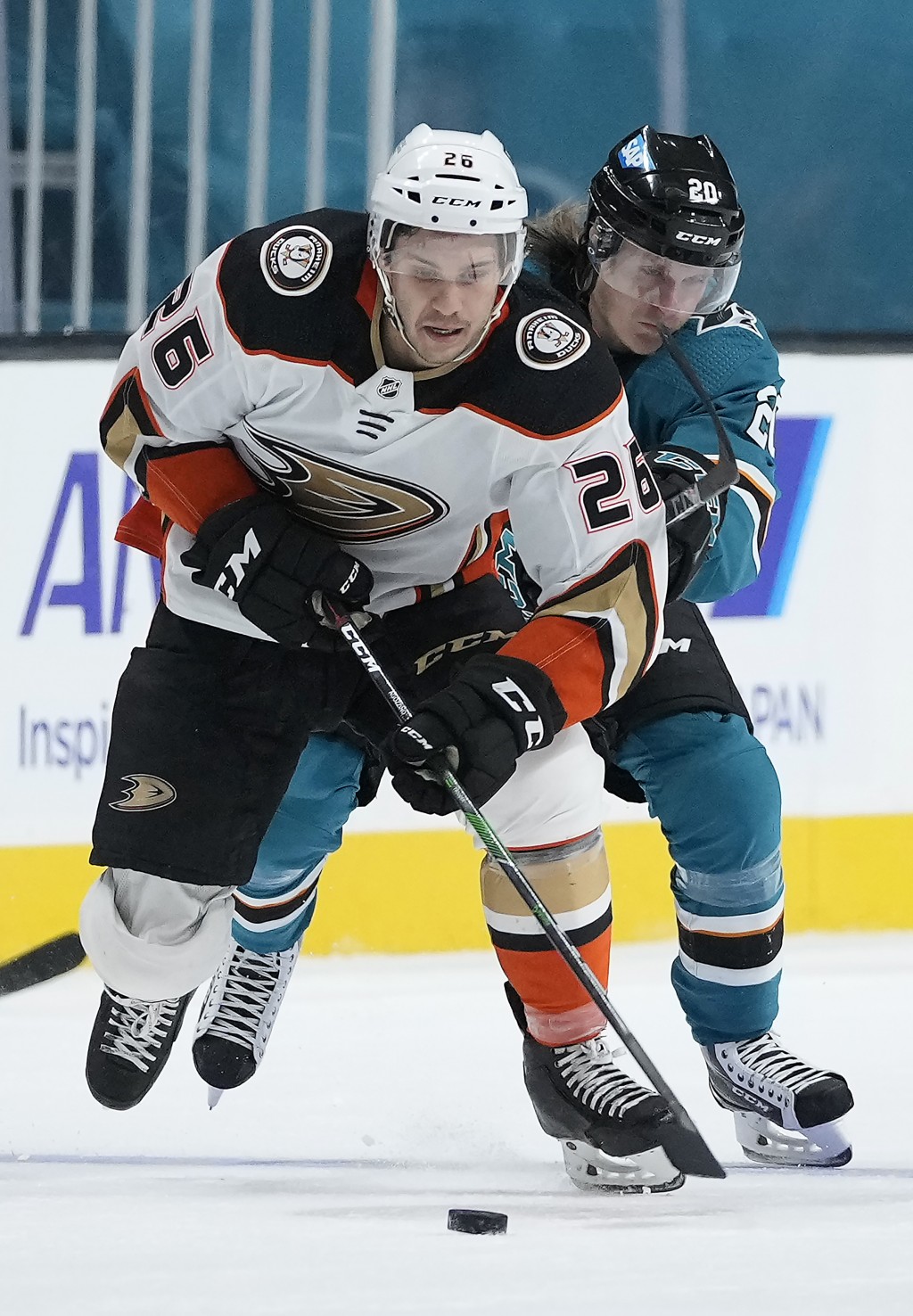 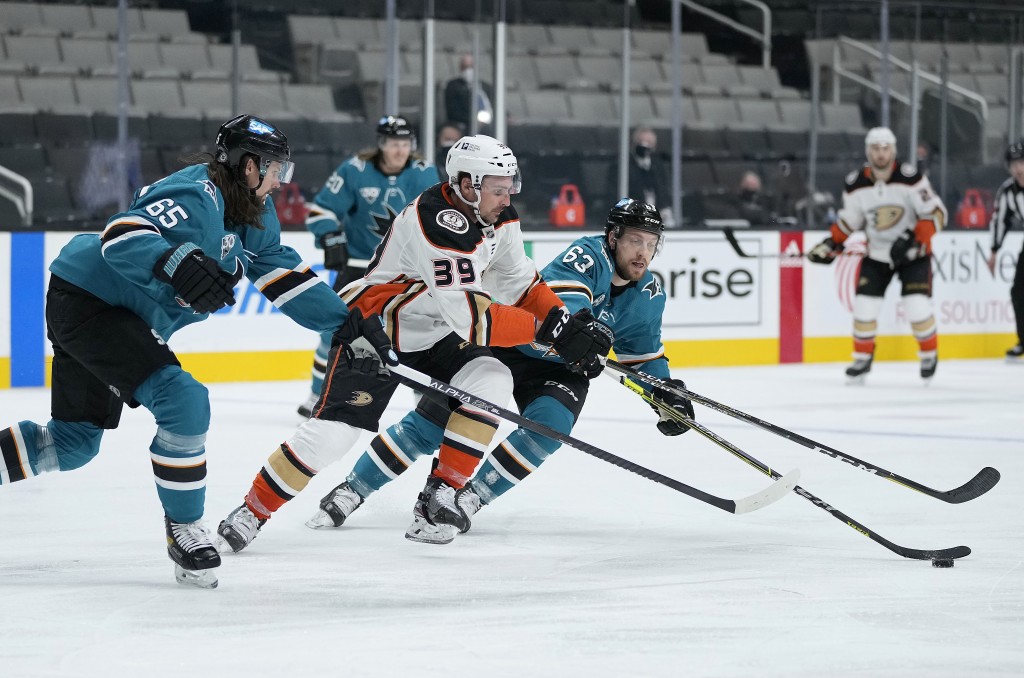 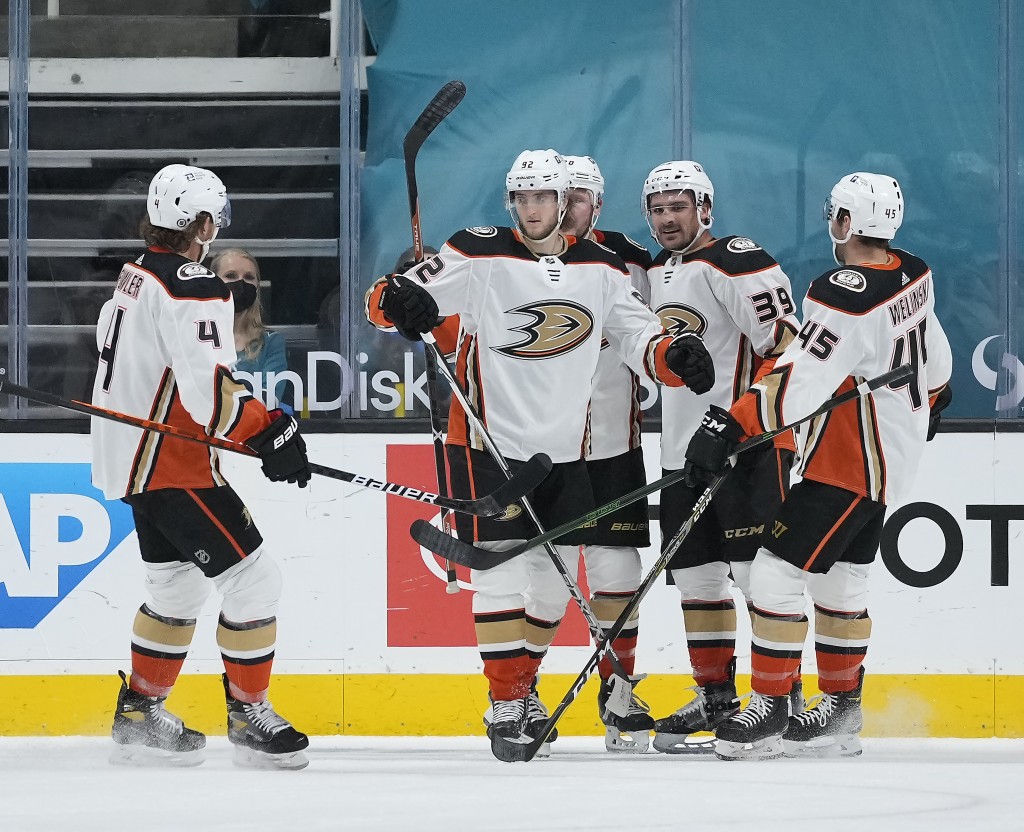 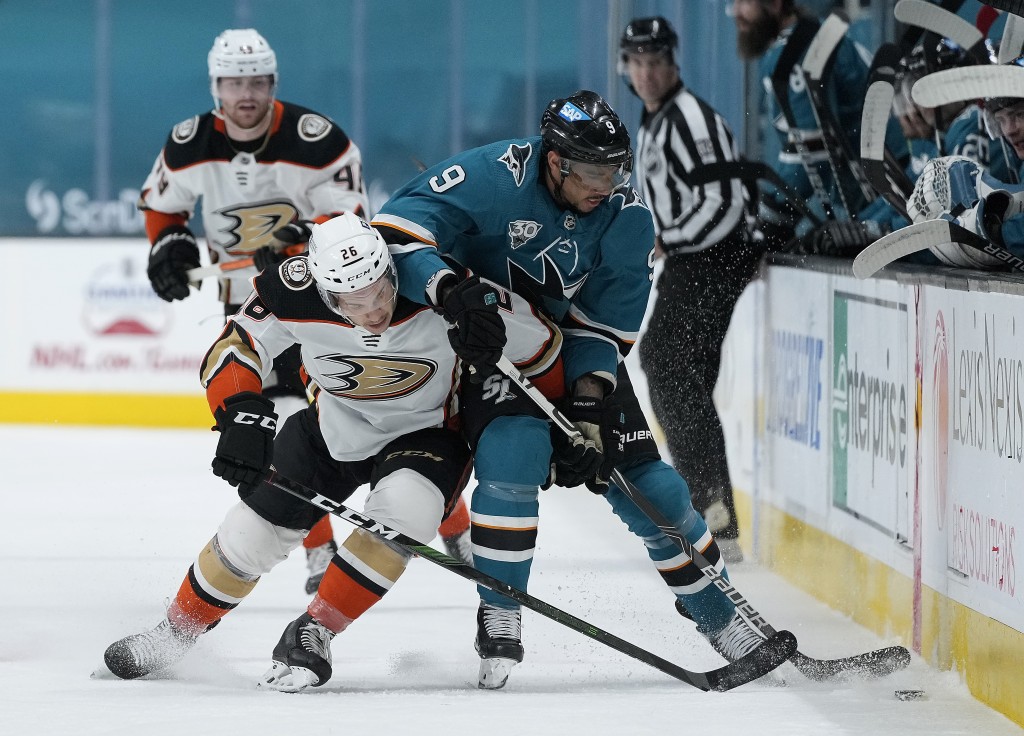 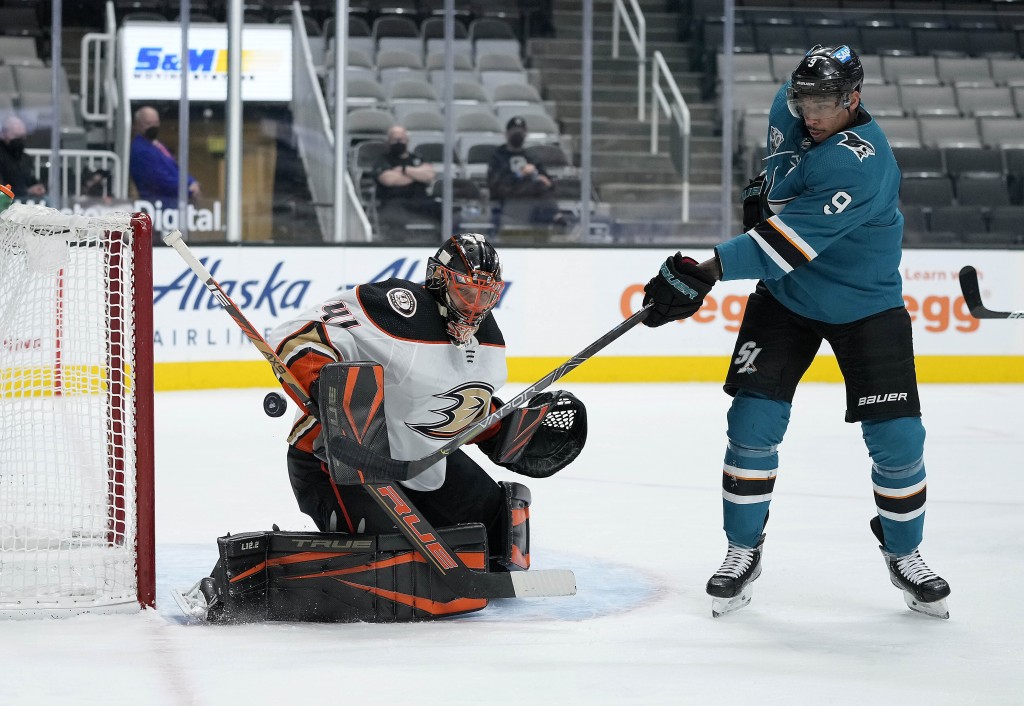 Alexander Volkov had two goals, Max Comtois had a goal and an assist and Rickard Rakell also scored as the Ducks beat the Sharks handily on their home ice for the second time in less than a week.

Martin Jones finished with 15 saves for the Sharks, who began the night four points out of the fourth and final playoff spot in the West Division and lost for the third time in four games.

San Jose outshot Anaheim 45-19 but was denied time and again by Stolarz, who has spent most of his career as a No. 3 goalie. He got just his seventh NHL victory since he broke into the league in the 2016-17 season.

For the second time in the past week, the Sharks appeared to come out flat against the last-place Ducks, who beat them 5-1 on Tuesday.

Anaheim took the lead just two minutes into the game when Comtois redirected a shot from Derek Grant and found the net for his team-leading 12th goal.

Later in the first, Volkov took a pass from Sam Carrick and scored for a 2-0 lead at 8:12.

The Sharks’ best scoring chance came shortly after that second goal, but Marcus Sorensen hit the crossbar on a breakaway attempt.

Volkov scored his second of the night and sixth of the season at 12:19. Rakell added a score on a wrist shot that beat Martin Jones early in the third.

In the hours leading up to Monday afternoon’s trade deadline, San Jose sent defenseman Nick DeSimone to Vegas in a three-team trade that also involved the Chicago Blackhawks. The Sharks received a fifth-round draft pick from Vegas.

Thought to perhaps be sellers at the deadline, Anaheim instead acquired defenseman Haydn Fleury from Carolina for defenseman Jani Hakanpaa and a sixth-round draft pick.

The Ducks also traded defenseman Ben Hutton to Toronto for a fifth-round pick.

The Sharks host the Ducks in a rematch Wednesday, the final game between the teams this season.