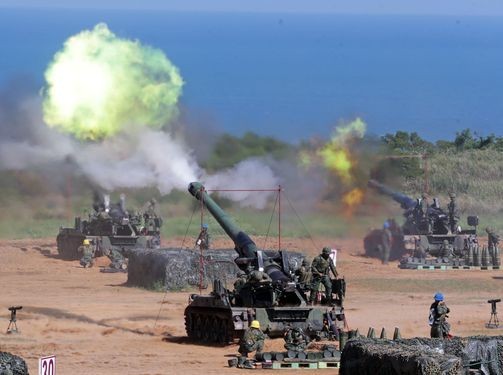 Su Tzu-yun (蘇紫雲), a senior analyst at the Institute for National Defense and Security Research (INDSR), said he believes U.S. President Joe Biden has embraced the concept of an "American-led alliance."

Su observed that the U.S. State Department has significantly relaxed its guidelines for exchanges with Taiwan. Under the policy of military exchanges preceding politics, Taiwan will have more opportunities to participate in multilateral military exchanges, the Liberty Times quoted him as saying.

Su pointed out that during the administration of former U.S. President Donald Trump, the Taiwanese military participated in multinational video conferences, such as the Indo-Pacific Landpower Conference, as well as an air force conference last year.

The analyst also noted that Japanese State Defense Minister Nakayama Yasuhide has called on Biden to firmly support Taiwan and that former Canadian Chief of the Defence Staff Jonathan Vance has warned China to be aware of the consequences of attacking the country. U.S. Indo-Pacific Commander Phil Davidson and his expected successor, Admiral John Aquilino, have also expressed concern for Taiwan’s security, Su said.

According to Su, if Taiwan is able to participate in more transnational military exchanges, including those related to strategic intelligence, handling gray zone threats, and marine patrols, it would be extremely helpful for the nation’s defense. However, he stressed that Taiwan must demonstrate a determination to strengthen its defense before it gains foreign support.

Taiwan Thinktank advisory committee member Tung Li-wen (董立文) pointed out that discussions on the threat of China's potential annexation of Taiwan are becoming deeper and more extensive. The Taiwanese military should therefore seize on opportunities to participate in international exchanges, he said.

Meanwhile, other countries would be interested in learning from Taiwan’s experience responding to Chinese cognitive warfare, sharp power strategy, and cyberattacks, Tung mentioned.

He remarked that after Biden took office, the continued implementation of the U.S.' Indo-Pacific strategy and transnational exchanges with regional allies, such as the four-party Quadrilateral Security Dialogue talks, have essentially created a “little Asian NATO.” However, whether this alliance will become formal remains to be seen.