TAIPEI (Taiwan News) — Chinese businessman Xiang Xin (向心) and his wife Kung Ching (龔青) were barred from leaving Taiwan for eight months after being indicted for money laundering, on top of allegations of spying for China, reports said Friday (April 9).

The CEO of China Innovation Investment Ltd. (CIIL, 中國創新投資) and his wife, a board member of the company were first accused of involvement in spying activities in November 2019.

While legal proceedings in that case have still not been completed, prosecutors accused them of having transferred NT$300 million (US$10.54 million) in illegal earnings from China to Hong Kong and then into Taiwanese bank accounts. They then used the money to buy luxury property in Taiwan, CNA reported.

Self-proclaimed spy Wang "William" Liqiang (王立強) told Australian media in 2019 that CIIL was set up under the direct supervision of the People Liberation’s Army (PLA) to collect intelligence in Hong Kong’s financial circles. The company was also supposed to invest in Taiwan's media so that it could influence reporting, Wang alleged.

The Taipei District Prosecutors Office used the National Security Act to bar the couple from leaving Taiwan from November 2019 until April 12. The new eight-month ban is related to the new charges of money laundering. 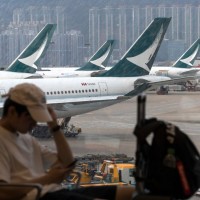