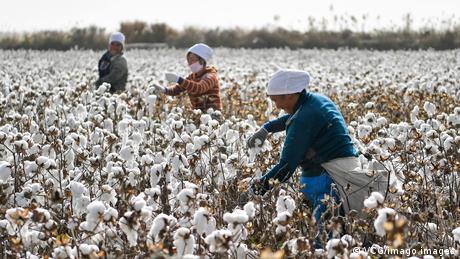 The latest China-versus-the-West dispute is getting ugly. On Wednesday, Chinese state television started blurring the names of Western brands worn by reality show contestants. The measure was a veiled threat to the likes of Adidas and Nike that they could easily lose access to the world's largest consumer market of 1.4 billion people.

Why? The brands have taken a stand on the sourcing of apparel made with cotton produced in China's western Xinjiang region. Human rights groups allege that the fiber is picked using forced labor by the country's Uyghur Muslim population.

They accuse China of holding up to 1 million Uyghurs in internment camps, which prompted Western sanctions on Chinese officials and new US legislation, enacted in January, that limits the import of Xinjiang cotton. Beijing, however, insists the camps are vocational training centers needed to fight extremism.

The world's second-largest clothing retailer, H&M, was among the first to be caught in the fray. Amid accusations that it was profiting from modern-day slavery, the Swedish multinational promised last year to stop buying cotton from Xinjiang.

But it now faces a backlash from Chinese consumers who threatened their own boycott of H&M products. Nike, Adidas and Hugo Boss have also been targeted on social media and several Chinese celebrities have cut ties with Western brands.

"The backlash is driven by nationalist sentiment, amplified by Chinese state media, and is being used to retaliate against increasing international scrutiny on the genocide that is happening in Xinjiang," Johnson Yeung, urgent appeal coordinator for Clean Clothes Campaign East Asia told DW. He noted that social media is heavily controlled and censored by the Chinese government.

Indeed, the Biden administration last month denounced what it said was Beijing's "state-led social media campaign and corporate and consumer boycott against companies."

The same brands that have won support among Western consumers in recent years for taking a stand on social issues, like equality and human rights, are now up against more hardline belief-based buyers in China, who see the cotton boycott as threatening the country's reputation.

China — already an important market for many international brands — is set to become even more critical to their bottom line. Domestic Chinese consumption is expected to double by 2030, according to Morgan Stanley, to reach $12.7 trillion (€10.7 trillion) — roughly the same as US consumers spend today. So Western brands may have to walk a thin line to appease both sides in this dispute. And that's led to rather contradictory messaging from some retailers.

German fashion brand Hugo Boss insists on its corporate website that it doesn't buy any goods directly from Xinjiang. However, on the Weibo social media platform, the firm told Chinese consumers that "Xinjiang long cotton is one of the best in the world, we believe quality raw materials would show its value. We will continue to buy and support Xinjiang cotton." The message was later deleted.

H&M, meanwhile, facing the removal of its productions from Chinese e-commerce platforms, was forced to downplay its criticism of Beijing's treatment of Uyghur Muslims. In a recent statement, it declared that China was a "very important market" and vowed to "regain the trust and confidence" of customers, colleagues, and business partners in the country.

This is not the first time that China has pressured foreign brands to conform to its position on sensitive issues. Western fashion firms and automakers were forced to apologize two years ago for implying that Hong Kong and Taiwan are independent countries.

Hong Kong was returned to China in 1997 by colonial ruler Britain under the one country, two systems model, while Beijing sees Taiwan as its territory. Other brands have run into similar trouble for remarks about Tibet.

To date, sanctions by the United States, the European Union and the UK on Chinese officials over human rights abuses against the Uyghurs have only spurred tit-for-tat measures from Beijing. China this week threatened Japan and Australia with retaliation if they join other countries in imposing punitive measures.

China, meanwhile, has warned multinational firms not to engage in politics over Xinjiang. Xu Guixiang, a Xinjiang government spokesman, said their interference was "like lifting a stone to drop it on one's own feet."

The New York Times reported Tuesday that while many retailers had vowed to stop using Xinjiang cotton, their promises might be difficult to uphold.

China exports unprocessed cotton to more than a dozen countries, including the world's other biggest apparel producers. The newspaper described how the Chinese government restricted access to supply chains in its far-western region, which would likely hamper efforts for auditors to ensure that products were free of Xinjiang-sourced cotton.

Yeung from Clean Clothes Campaign East Asia told DW that a successful Western boycott relied on apparel producers' "willingness to eradicate forced labor." He pointed to Dutch clothing brand We Fashion that he said had committed to ending the use of Xinjiang cotton, although the company did not have stores in China. British retailer M&S had also backed the call to stop forced labor, he said.

"Given the intense authoritarian control in China, we have to maintain the pressure for a long time," he conceded.