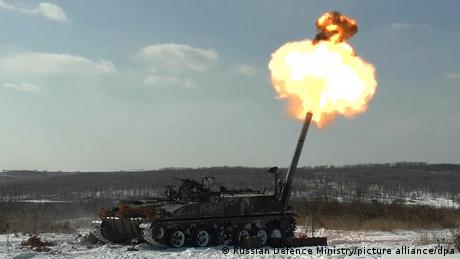 Vladimir Putin is irritated: There's Joe Biden's recent "Putin is a killer" ABC interview, the painful sanctions imposed on the Russian aerospace industry by the White House in early March and, just as important, the latest moves by the administration of Ukrainian President Volodymyr Zelenskiy.

These include the closure of the pro-Kremlin media in Ukraine and sanctions on Russian government organizations — including the Rossotrudnichestvo agency, a soft-power vehicle similar to China's Confucius Institute. Zelenskiy's administration also imposed sanctions on Ukraine's main pro-Kremlin politician, Viktor Medvedchuk, whose daughter is Putin's godchild.

In recent weeks, Ukrainian officials have talked about the futility of further talks on the implementation of the 2015 Minsk accords, which were supposed to stop the fighting in the Donbass region of Eastern Ukraine. Among the doubters is former President Leonid Kravchuk, Kyiv's official delegate to the Minsk agreements' working group. In addition, the Ukrainian government has created the "Crimean Platform" — a long-term project aimed at putting maximum international political and diplomatic pressure on Moscow to return the peninsula.

Putin is infamously loath to be seen as weak and cornered. His reaction to such situations is invariably one of bravado and to intimidate his opponents. The Russian army's buildup on Ukraine's borders, accompanied by the hysteria in Russian state media, looks like such a response: "[I] am not afraid! Reckon with me!"

His "fortress Russia" attitude will also help to distract attention from the fate of the opposition leader Alexei Navalny, who is seriously ill in jail. It could also whip up support for Putin's United Russia party before what passes for parliamentary elections this September. The party has been ailing for quite some time now. Putin's new triumph over "genocidal Ukrainian nationalists" would help to revive United Russia's fortunes.

At first glance, the Kremlin seems to be warning Kyiv to go back to the Minsk accords. However, Putin should have realized by now that no government in Kyiv will ever fulfill the 2015 agreements. Most Ukrainian politicians and the general public see them as deeply humiliating.

Back in 2015, France and Germany, traditionally reluctant to stand up to Moscow, leaned heavily on Ukrainian President Petro Poroshenko to sanction the accords. The Obama administration in Washington, which distanced itself from the Europeans' affairs, concurred.

This time the initial reaction from Berlin and Paris seems to justify the Kremlin's calculations, judging by the typical appeals for "deescalation" and "restraint" that avoid apportioning the blame.

The reaction from the United States is very different from that of 2015. President Joe Biden has called Zelenskiy and assured him of unequivocal US support. The State Department has demanded explanations from Moscow about the activities on the border.

If Putin were to withdraw troops from the Ukrainian border, it would look like he was caving to US pressure. Launching a full-scale assault from the Russian-controlled areas of Donbass toward the Azov Sea and the water-starved Crimea may be his dream. But it would mean many Russian servicemen lost in a bloody battle with the US-armed Ukrainian army plus massive Western sanctions — a risky and potentially unpopular move.

Official recognition of the puppet states in Russia-occupied Donbass is another possibility. But the West would see that as a de facto annexation. This will also mean new sanctions, the final death knell for the Minsk agreements, as well as a total loss of any leverage over Kyiv.

In my view, the more likely scenario is that Moscow will send so-called peacekeepers to the "republics" — ostensibly to protect the civilians there from imminent Ukrainian aggression. Russians will applaud. Putin will renew pressure on Zelensky to uphold his side of the Minsk agreements and still leave a way out for himself.

The Kremlin counts on the European Union — or, more precisely, Angela Merkel and Emmanuel Macron — to lean on the Ukrainians to make new concessions to Moscow. Putin is convinced that the Europeans will, as before, avoid confronting him and that Biden will go along with Berlin and Paris to avoid a trans-Atlantic rift.

Putin is readying himself to test the US's resolve. Biden had better be ready.