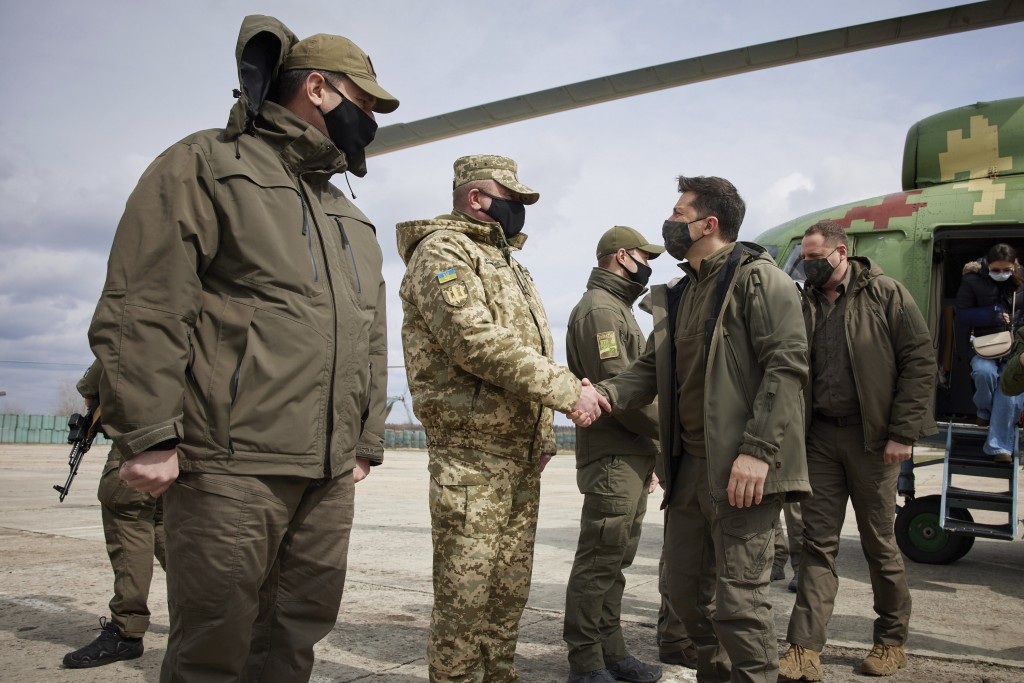 KYIV, Ukraine (AP) — Ukraine’s president on Thursday visited the area of conflict in his country's east amid an escalation of tensions that has raised fears of a resumption of large-scale hostilities.

The conflict with Russia-backed separatists in eastern Ukraine erupted shortly after Moscow’s 2014 annexation of Ukraine’s Crimea peninsula. More than 14,000 people have died in the fighting.

Officials in Ukraine and the West have raised concerns about increasingly frequent cease-fire violations in the country's industrial heartland, known as Donbas. They also expressed worries about Russian troops' buildup along the border with Ukraine.

“I want to be with our soldiers in the tough times in Donbas,” Ukrainian President Volodymyr Zelenskiy tweeted as he headed to the conflict area Thursday. He said that a 23-year-old Ukrainian soldier was killed in the area on Wednesday night.

Zelenskiy has accused Russia of flexing its military muscles and held a series of calls with Western leaders to rally support for Ukraine amid the tensions.

Russia has rejected the claims, arguing that it can deploy its troops wherever it deems necessary on its territory and emphasizing that they don't threaten anyone. It has accused Ukrainian authorities of trying to stoke up tensions in the east for domestic policy purposes.

In Thursday's call with German Chancellor Angela Merkel, Russian President Vladimir Putin “drew attention to the provocative actions of Kyiv, which has deliberately sought to exacerbate tensions along the line of control,” the Kremlin said in its readout of the call.

Merkel’s office said she discussed the increased Russian military presence in the area near eastern Ukraine with Putin, and “called for the removal of these troop reinforcements in order to achieve a de-escalation of the situation.”