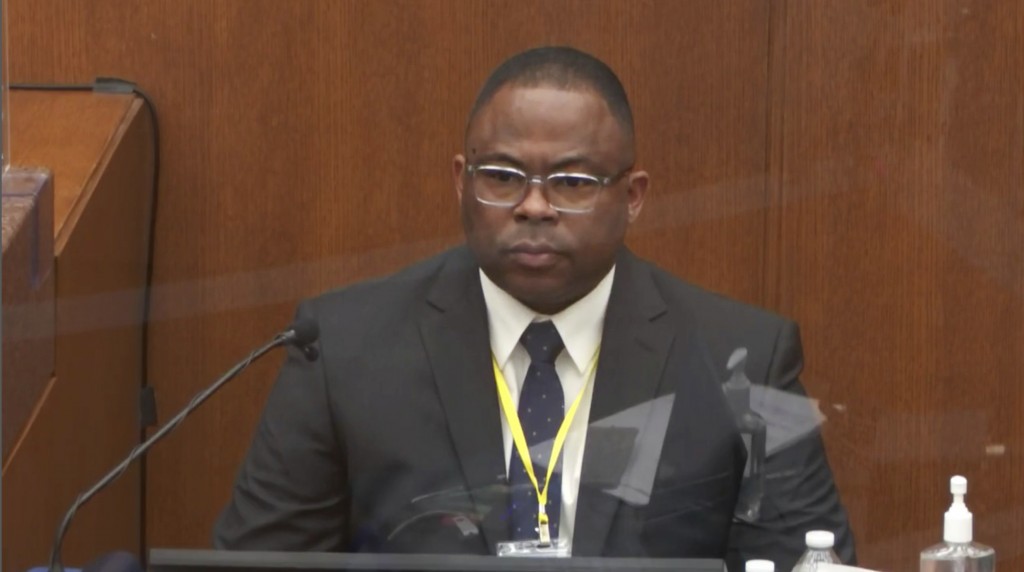 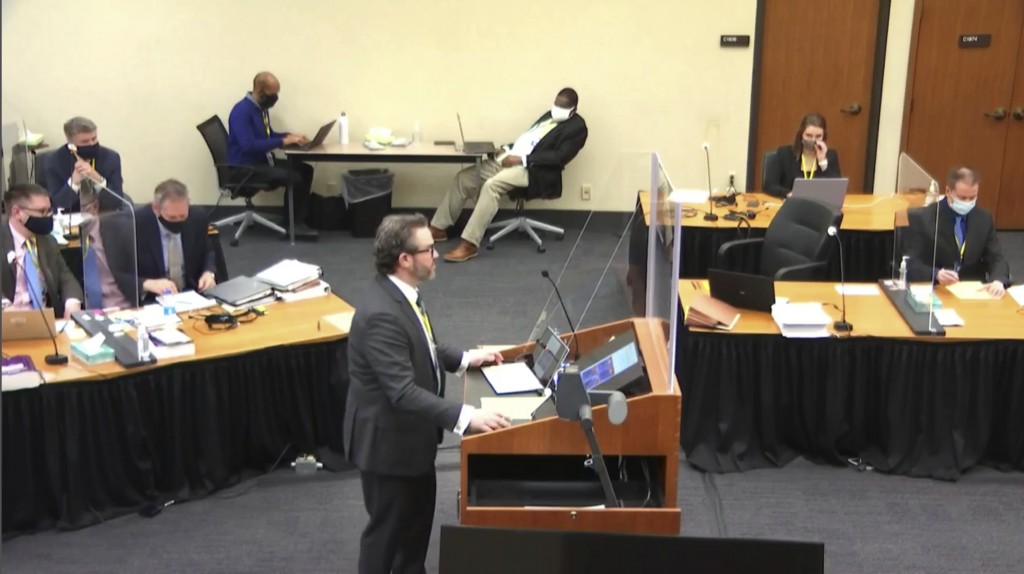 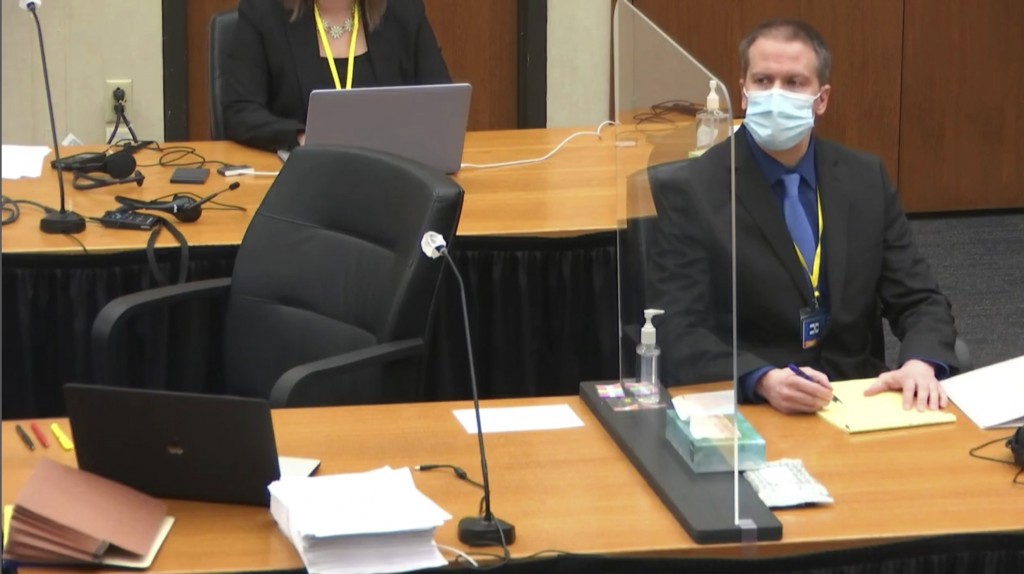 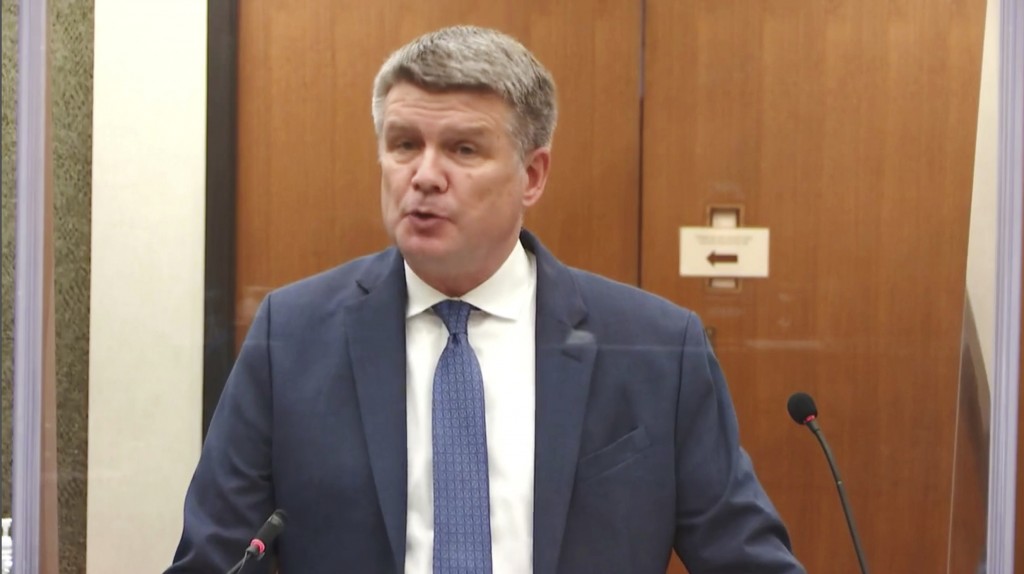 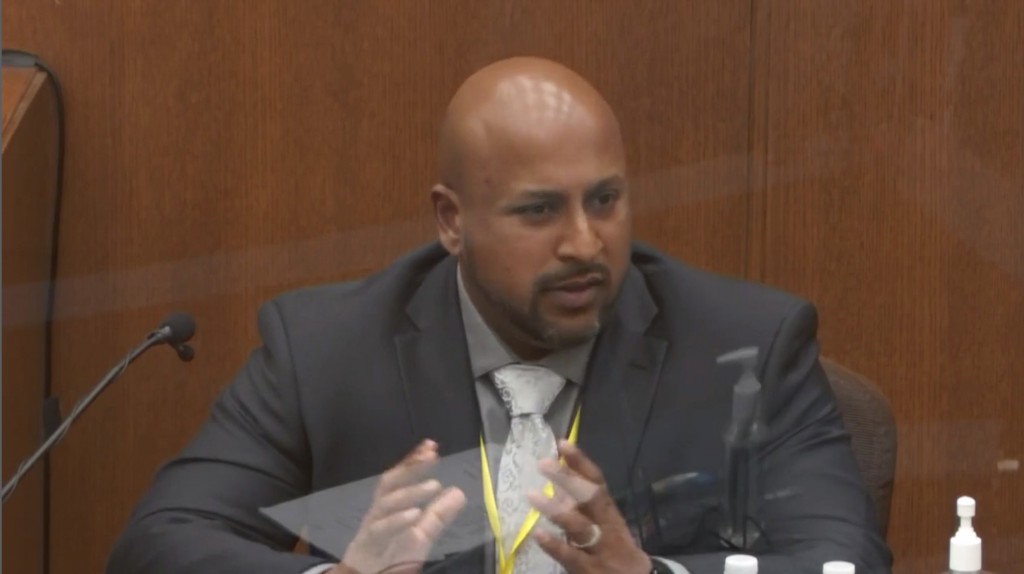 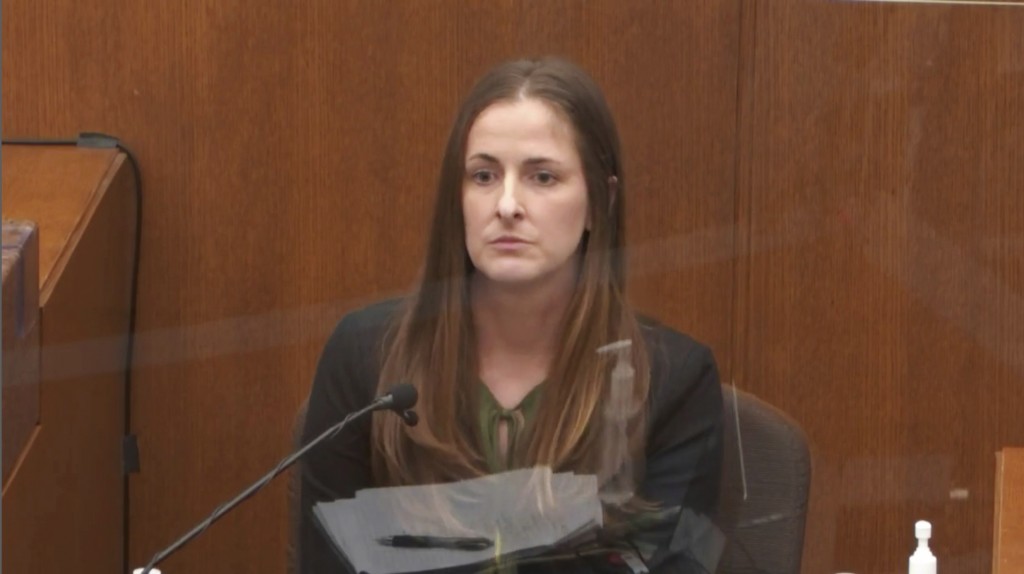 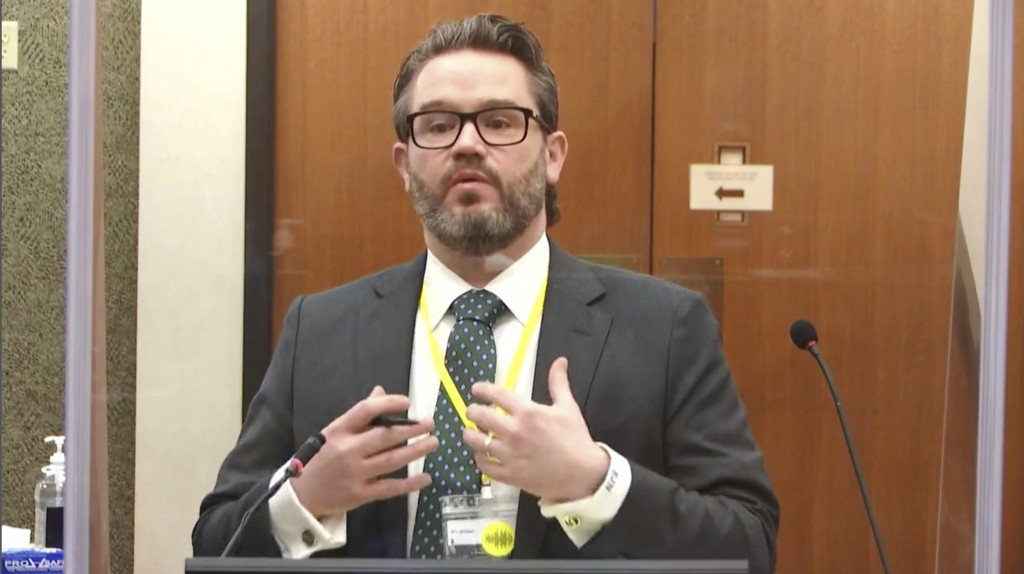 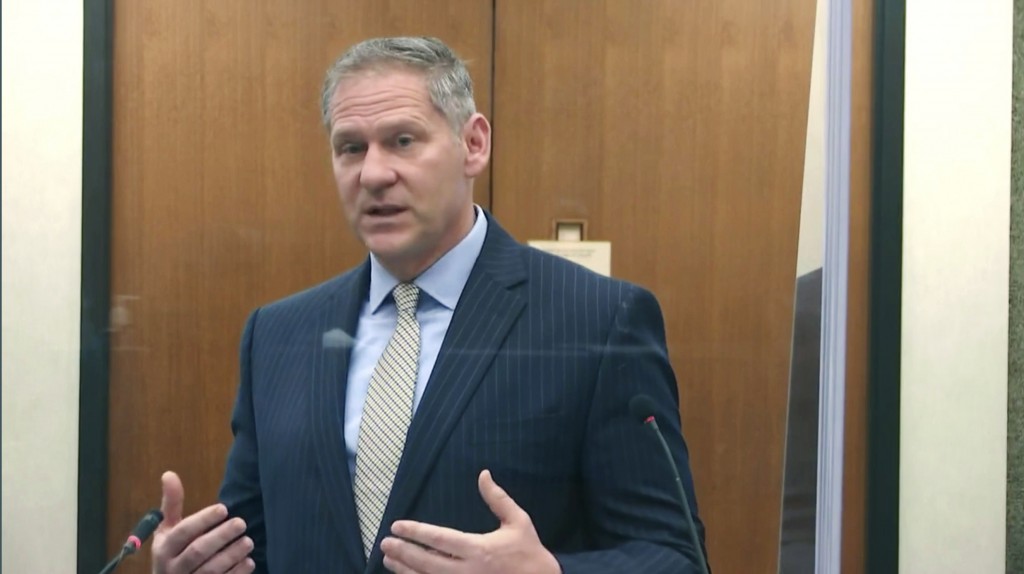 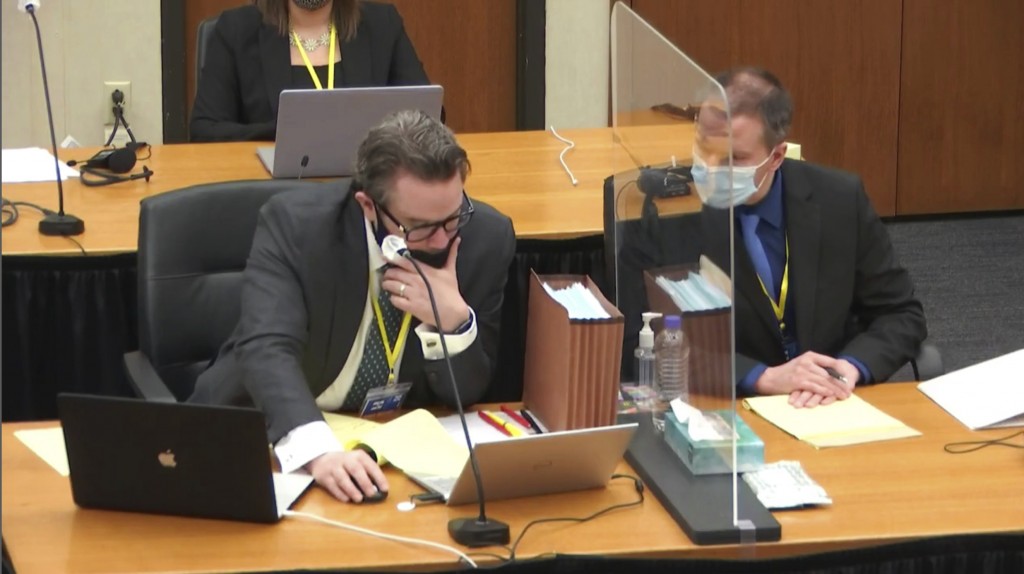 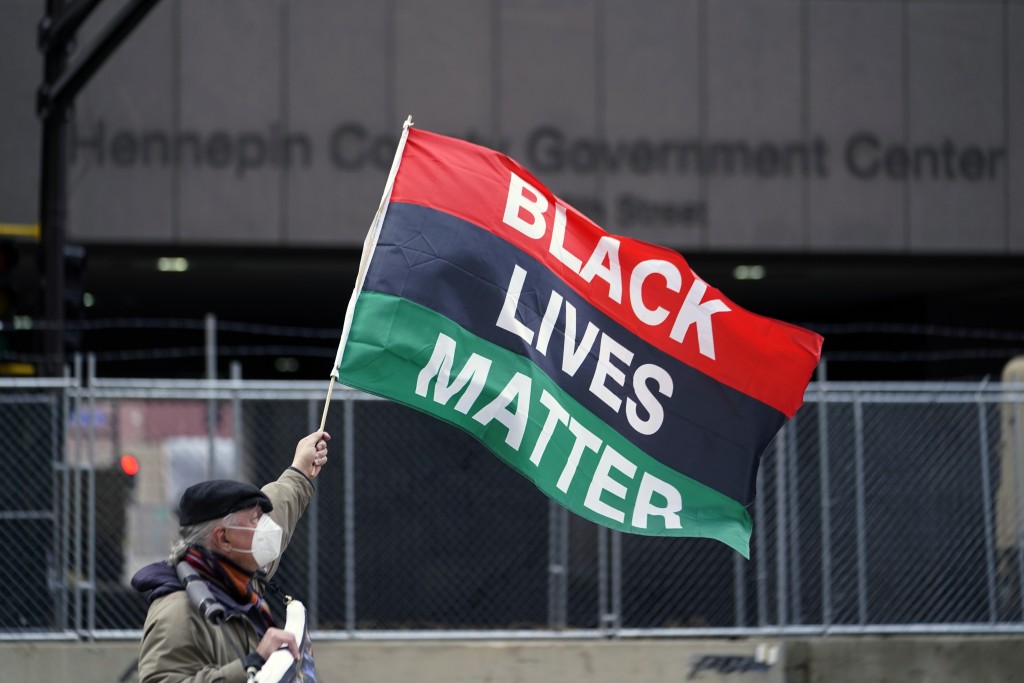 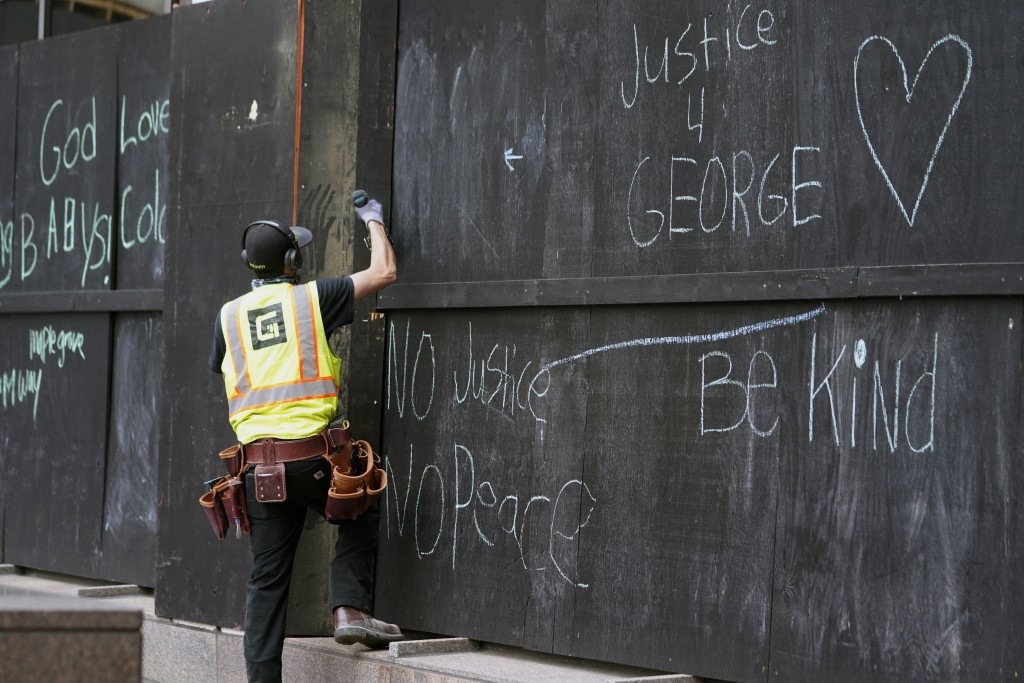 MINNEAPOLIS (AP) — Officer Derek Chauvin had his knee on George Floyd’s neck area — and was bearing down with most of his weight — the entire 9 1/2 minutes the Black man lay facedown with his hands cuffed behind his back, a use-of-force expert testified at Chauvin’s murder trial.

Jody Stiger, a Los Angeles Police Department sergeant serving as a prosecution witness, said Wednesday that based on his review of video evidence, Chauvin applied pressure to Floyd's neck or neck area from the time officers began pinning Floyd to the ground until paramedics began to move him to a stretcher.

“That particular force did not change during the entire restraint period?” prosecutor Steve Schleicher asked as he showed the jury a composite of five still images.

“Correct,” replied Stiger, who on Tuesday testified that the force used against Floyd was excessive.

Chauvin attorney Eric Nelson countered by pointing out what he said were moments in the video footage when Chauvin's knee did not appear to be on Floyd's neck but on his shoulder blade area or the base of his neck. Stiger did not give much ground, saying the officer's knee in some of the contested images still seemed to be near Floyd's neck, though he agreed his weight might have shifted at times.

In other testimony, the lead Minnesota state investigator on the case, James Reyerson, initially agreed with Nelson that Floyd seemed to say in a police body-camera video of his arrest, “I ate too many drugs.”

But when a prosecutor played a longer clip of the video, Reyerson said he believed what Floyd really said was “I ain't do no drugs.”

Chauvin, 45, is charged with murder and manslaughter in Floyd’s death May 25. Floyd, 46, was arrested outside a neighborhood market after being accused of trying to pass a counterfeit $20 bill. A panicky-sounding Floyd struggled and claimed to be claustrophobic as police tried to put him in a squad car, and they pinned him to the pavement.

Bystander video of Floyd crying that he couldn’t breathe as onlookers yelled at Chauvin to get off him sparked protests and scattered violence around the U.S.

Nelson has argued that the now-fired white officer “did exactly what he had been trained to do over his 19-year career,” and he has suggested that Floyd's drug use and his underlying health conditions are what killed him, not Chauvin’s knee, as prosecutors contend. Fentanyl and methamphetamine were found in Floyd's system.

Breahna Giles, a state forensic scientist, testified Wednesday that pills found in the SUV Floyd was driving contained methamphetamine and fentanyl. Another witness, forensic chemist Susan Meith, testified that remnants of a pill found in the back of the police squad car also contained methamphetamine and fentanyl. Earlier testimony revealed that that pill contained DNA from Floyd’s saliva.

Earlier, Nelson asked Stiger about uses of force that are commonly referred to by police as “lawful but awful.” Stiger conceded that “you can have a situation where by law it looks horrible to the common eye, but based on the state law, it’s lawful.”

Nelson has argued, too, that the officers on the scene were distracted by what they perceived as an increasingly hostile crowd of onlookers.

But Stiger told the jury, “I did not perceive them as being a threat,” even though some bystanders were name-calling and using foul language. He added that most of the yelling was due to “their concern for Mr. Floyd.”

Chauvin's lawyer noted that dispatchers had described Floyd as between 6 feet and 6-foot-6 and possibly under the influence. Stiger agreed it was reasonable for Chauvin to come to the scene with a heightened sense of awareness.

Stiger further agreed with Nelson that an officer’s actions must be judged from the point of view of a reasonable officer on the scene, not in hindsight. Among other things, Nelson said that given typical emergency medical response times, it was reasonable for Chauvin to believe that paramedics would be there soon.

In other testimony, Stiger said that as Floyd lay pinned to the ground, Chauvin squeezed Floyd’s fingers and pulled one of his wrists toward his handcuffs, a technique that uses pain to get someone to comply, but Chauvin did not appear to let up.

“Then at that point it’s just pain,” Stiger said.

Stiger was asked by prosecutors whether Chauvin had an obligation to take Floyd’s distress into account as the officer considered how much force to use.

During the testimony of Reyerson, the state investigator, prosecutors stopped and started multiple videos and examined time stamps in an attempt to show the jury how long Chauvin held his position after Floyd stopped talking and moving. Reyerson testified that Chauvin’s knee was on Floyd’s neck for minutes after Floyd went silent.

Find AP’s full coverage of the death of George Floyd at: https://apnews.com/hub/death-of-george-floyd