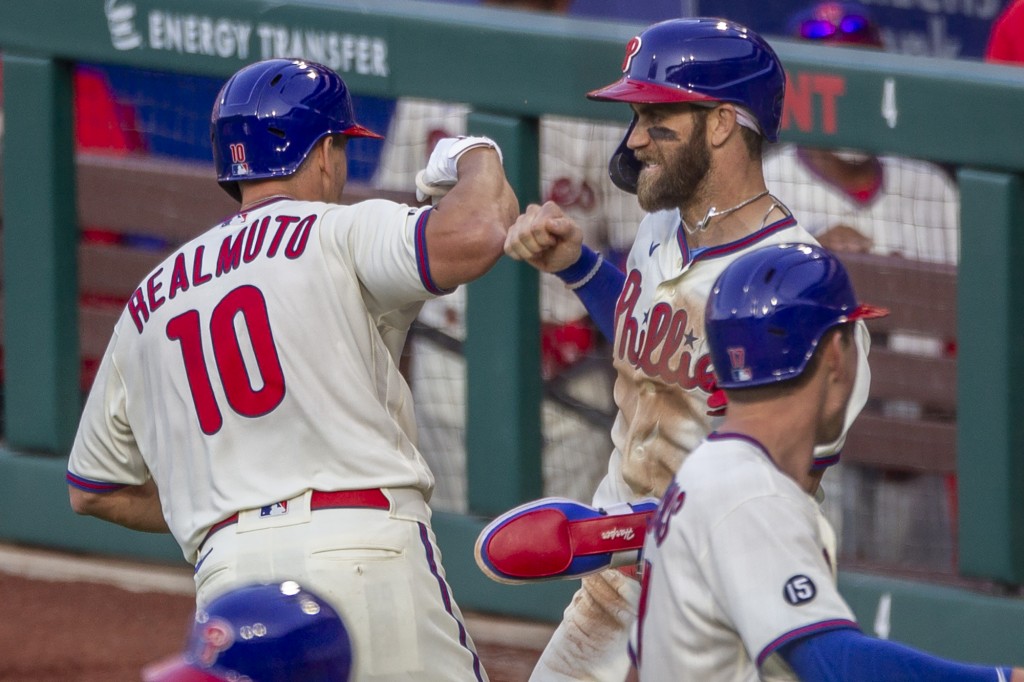 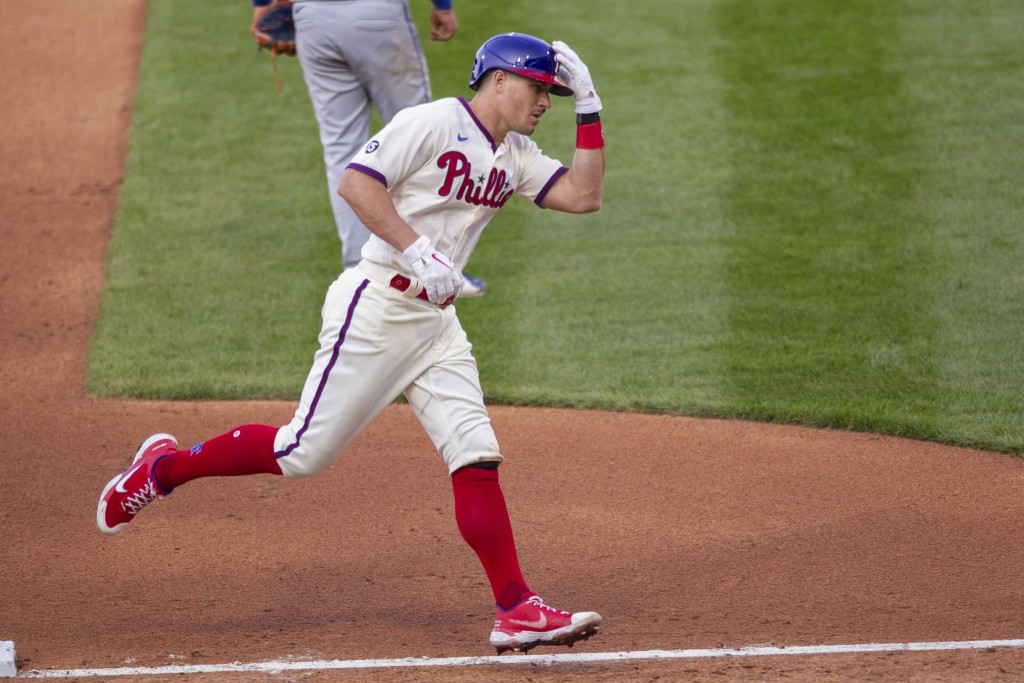 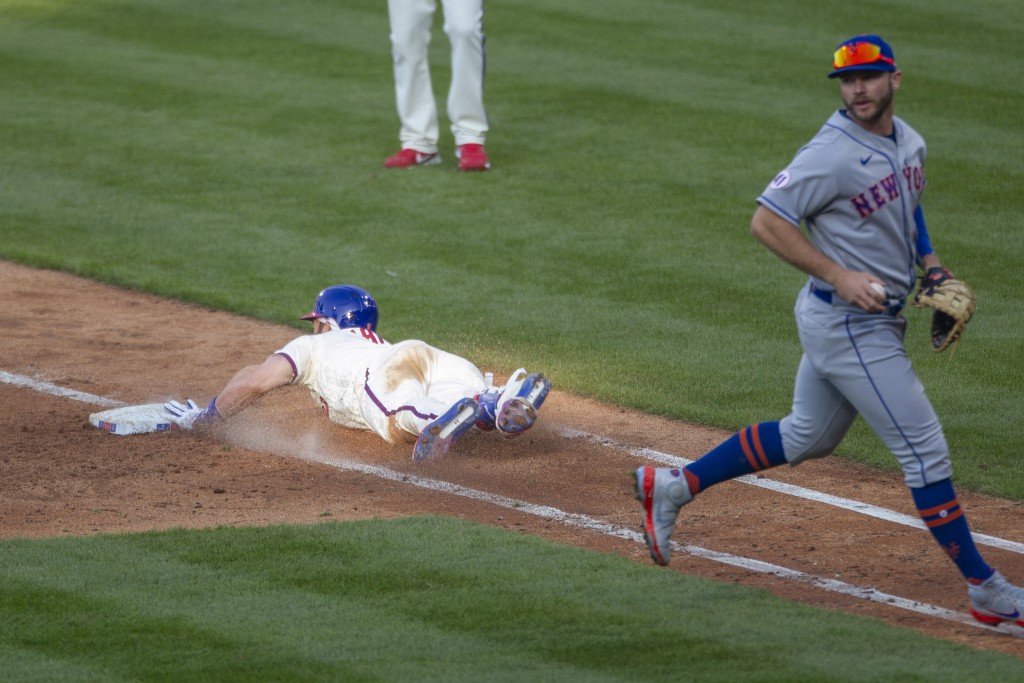 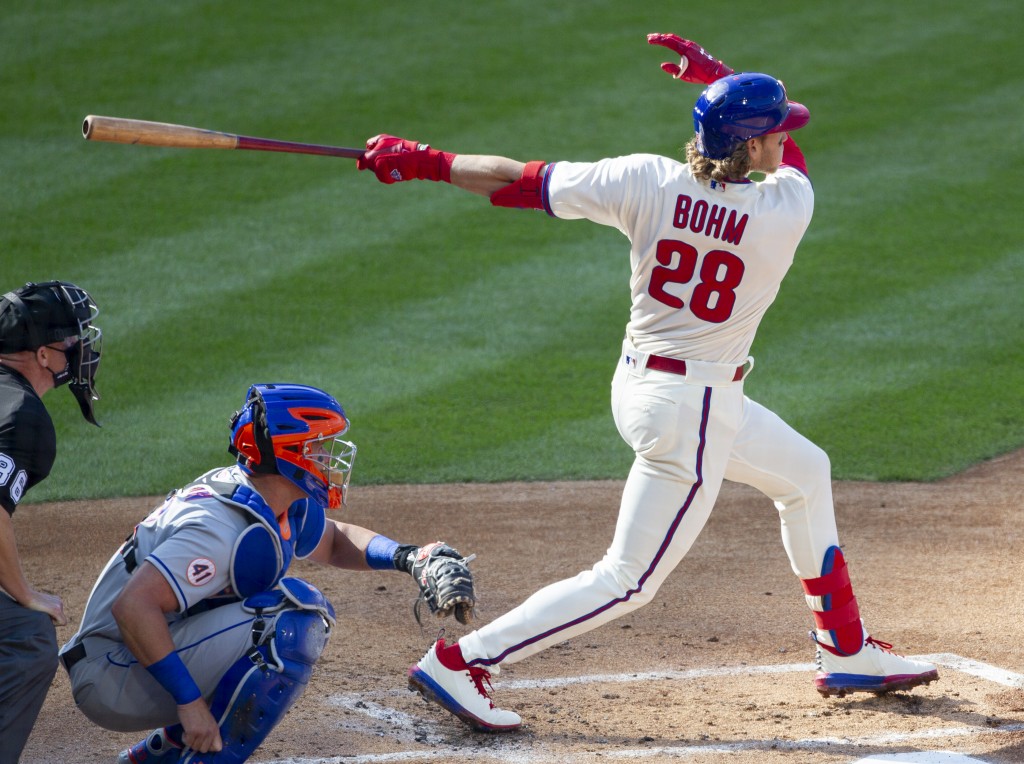 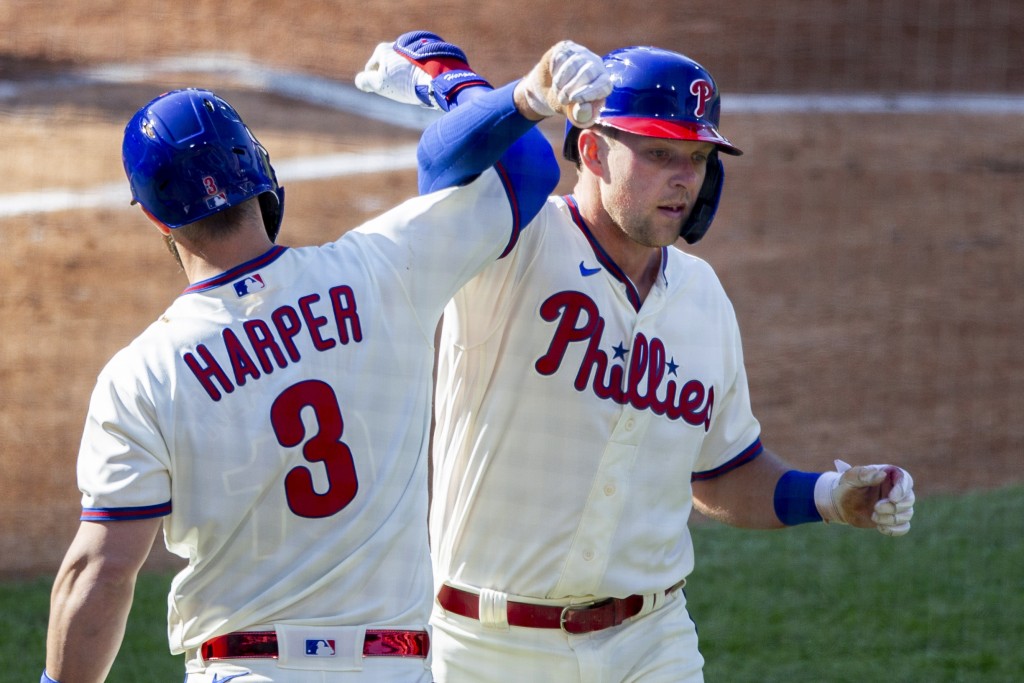 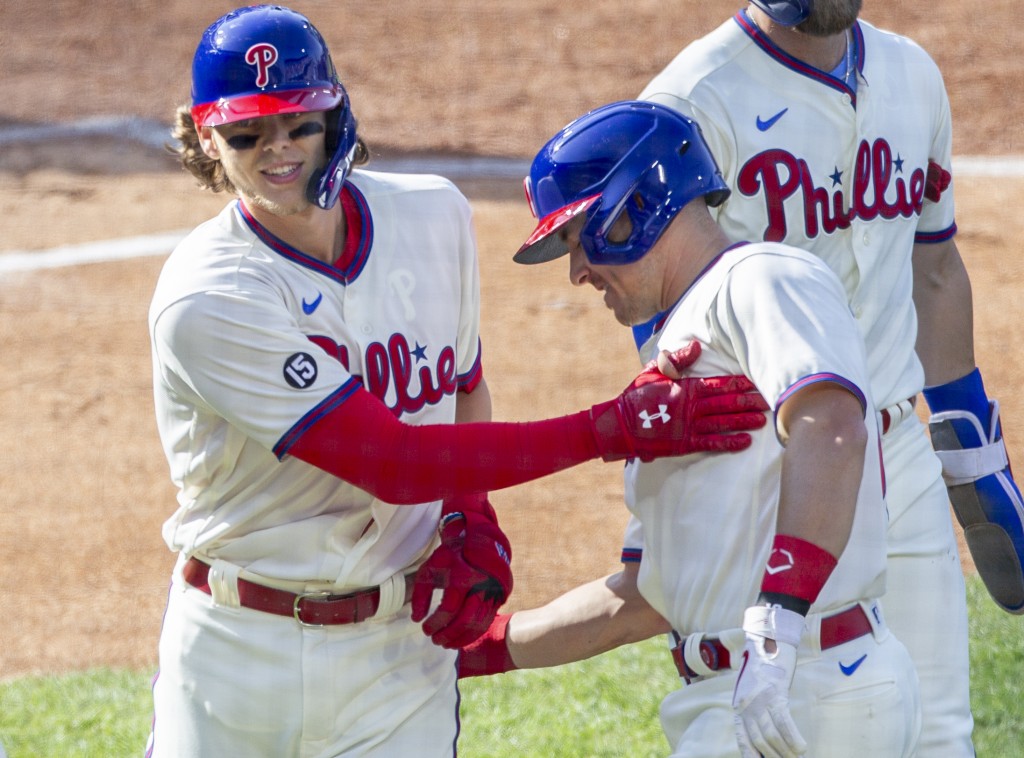 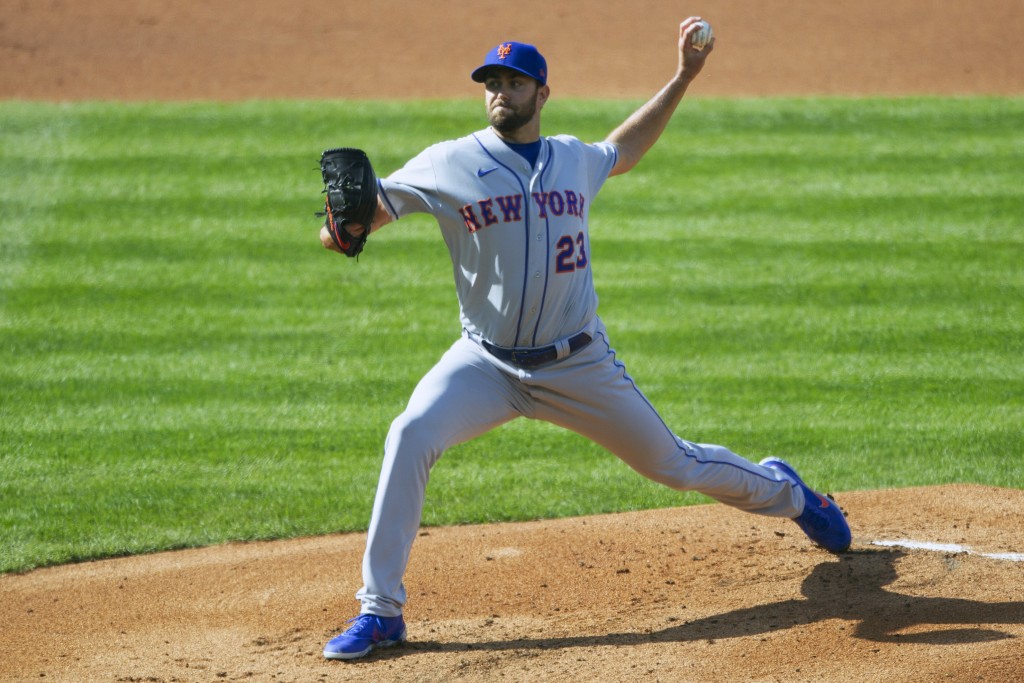 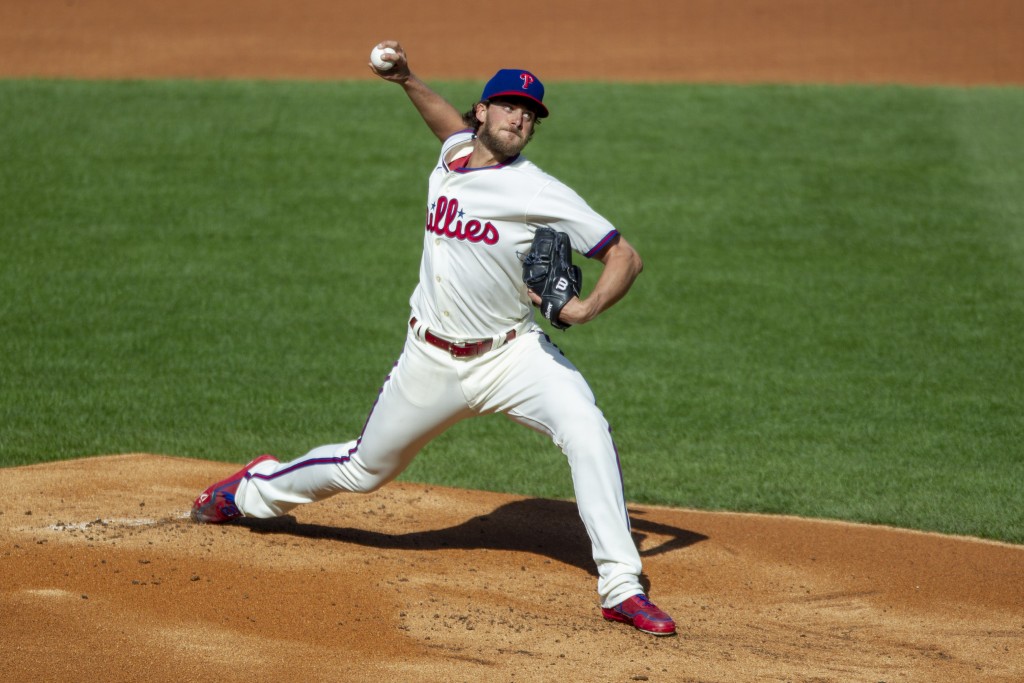 PHILADELPHIA (AP) — Alec Bohm and J.T. Realmuto each hit a three-run homer, Rhys Hoskins had a solo shot and the Philadelphia Phillies beat the New York Mets 8-2 on Wednesday.

The Phillies took two of three from their division rivals after opening the season with a three-game sweep of three-time defending NL East champion Atlanta.

Phillies ace Aaron Nola lasted only four innings, pitching out of trouble the final two. He allowed one run and six hits, striking out five.

Hoskins launched an opposite-field drive just over the right-field wall in the first. Bryce Harper lined the next pitch off the fence for a double. After Realmuto walked, Bohm blasted a fastball deep into the left-center field seats for a 4-0 lead.

Pete Alonso’s RBI single in the third cut it to 4-1 but Nola escaped further damage by striking out Dominic Smith and Jonathan Villar to leave runners on first and third.

Nola got out of another jam in the fourth, freezing Michael Conforto with a backdoor curve to leave the bases loaded. Before Conforto came up, Francisco Lindor took an 0-2 curve off his foot after ripping a liner down the right-field line that just hooked foul.

Realmuto connected on the first pitch thrown by reliever Jacob Barnes in the fifth, sending an opposite-field shot out to right to make it 7-1.

Lindor, the four-time All-Star shortstop acquired from Cleveland in the offseason and signed to a team-record, $341 million, 10-year contract extension last week, was 2 for 11 with one RBI in his first series with the Mets.

He was taunted by Philly fans with chants of “overrated” in his last at-bat.

Philadelphia’s starters have a 2.18 ERA in the first six games. The bullpen is at 3.27.

Hoskins hit two doubles along with his homer and became the fourth Phillies player with seven extra-base hits in the first six games. He joined Ryan Howard (2010), John Kruk (1993), and Del Ennis (1950).

Mets: 3B J.D. Davis wasn’t in the lineup because of swelling in his bruised left hand. A 91 mph fastball hit his hand Tuesday night. A second set of X-rays were negative. He remains day to day.

Mets: RHP Taijuan Walker starts the home opener Thursday against Miami. Walker spent last season with Seattle and Toronto, going 4-3 with a 2.70 ERA. The Mets had their season-opening series at Washington wiped out because of a coronavirus outbreak among the Nationals.