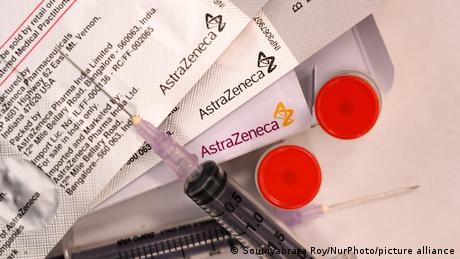 The European Medicines Agency (EMA) on Wednesday said blood-clotting should be listed as a "very rare side effect" of taking the AstraZeneca COVID vaccine.

But the EU regulator said the benefits of taking the jab continued to outweigh the risks.

The Amsterdam-based body's safety committee (PRAC) said in a statement that "unusual blood clots with low blood platelets should be listed as very rare side effects," adding that the "overall benefit-risk remains positive."

Officials said they had "intensive discussions" based on the scientific evidence available before arriving at their latest ruling.

Emer Cooke, the director of the European Medicines Agency, said: "COVID-19 is a very serious disease with high hospitalization and death rates."

"This vaccine has proved to be highly effective," she told reporters. "It is saving lives."

What was the EMA investigating?

The European drug regulator said it had received reports of 169 cases of a rare brain blood clot in people who took AstraZeneca's COVID-19 vaccine.

That number is compared to the 34 million doses of the shot administered in the European Economic Area, said Sabine Straus, the chair of the European Medicines Agency's (EMA) safety committee.

Straus said side-effects were not unexpected as vaccines were rolled out on a large scale. "What we are trying to do is provide all the information that is available on both the benefits and the risks," she said.

The EMA evaluation comes after several European countries suspended or restricted use of the AstraZeneca vaccine in March following isolated blood clotting complications in recipients of the shot. Several countries have meanwhile issued their own restrictions for the jab.

Experts reviewed whether some cases of blood clotting in adults who had received the AstraZeneca vaccine could have been linked to the shot.

What was the EMA's advice to patients?

The regulator did not change its guidelines on administering the vaccine, nor did it impose age restrictions akin to those seen in certain countries.

It recommended that people should seek immediate medical assistance if they experience the following symptoms within two weeks of receiving an AstraZeneca shot.

What have other medical bodies said?

The EMA had said last week that there was "no evidence that would support restricting the use of this vaccine in any population."

A World Health Organization (WHO) official on Tuesday said that the vaccine is safe and effective, and that the "risk-benefit" balance remains "largely" positive.

"There is no link for the moment between the vaccine and thrombotic events with thrombocytopenia," said Rogerio Pinto de Sa Gaspar, the WHO's director for regulation and pre-qualification.

EU health ministers said Wednesday they would meet virtually following the EMA announcement to discuss how to speed up Europe's sluggish vaccine rollout.

How have European countries responded?

In the immediate aftermath of the EMA announcement, UK regulators announced that they would stop administering the vaccine to people under the age of 30.

England's deputy chief medical officer Jonathan Van-Tam still described the potential side effects as "vanishingly rare," also adding "you can't pick these kinds of things up until you have deployed literally tens of millions of doses of vaccine."

German vaccine regulators on March 31 said the AstraZeneca vaccine would temporarily no longer be given to people under the age of 60.

Of the 31 cases of rare thrombosis reported to Germany's Paul Ehrlich Institute, it was determined each person had recently received the AstraZeneca vaccine. In nine cases, the outcome was fatal.

France has recommended that the AstraZeneca vaccine be reserved for people aged 55 and older.

Denmark and Norway have extended a suspension of the vaccine's use until mid-April.