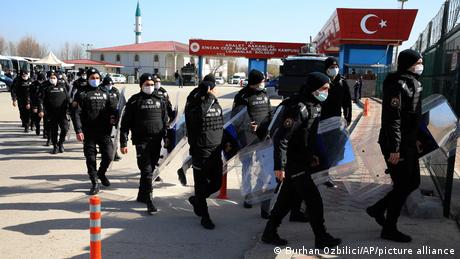 A court in Ankara convicted some 488 people of violating the constitution on Wednesday over their links to a failed 2016 coup attempt, Turkish media reported.

Of those convicted, the court handed down life sentences to at least four former military officials.

The four were among the nearly 500 defendants facing sentencing during Wednesday's hearing, which is looking into the actions of Turkey's presidential guard during the coup attempt.

Wednesday's hearing is one of the last in a long series of cases packed together in a massive ongoing legal process that began in 2017 and involves hundreds of trials to prosecute those accused of being involved with the coup attempt.

What were the charges?

Several of the defendants in Wednesday's hearing were accused of occupying the headquarters of state broadcaster TRT in Ankara on the night of the coup in July 2016 and forcing the news anchor to read out a statement.

A judge sentenced former lieutenant colonel Umit Gencer to life behind bars for "violating the constitutional order" by making the TRT broadcaster read the "coup declaration."

Ex-major Fedakar Akca was given an aggravated life sentence for leading a guard regiment on the night of the coup attempt, Turkey's Anadolu news agency reported.

The exact sentences of the 488 defendants convicted of violating the constitution were not immediately clear.

What happened during the coup?

More than 250 people were killed in the July 15, 2016, attempt to overthrow the government of President Recep Tayyip Erdogan.

During the effort, rogue soldiers took control of warplanes, helicopters and tanks and tried to take over key state institutions.

Turkey believes a movement loyal to the Muslim cleric, Fethullah Gulen, was behind the 2016 plot.

Gulen, a Muslim preacher who was once an Erdogan ally, has lived in exile in the United States since 1999.

He denies any involvement in the failed putsch. Ankara brands his group a terrorist organisation, but Washington says it will not extradite him.

About 292,000 people have been detained over alleged connections to Gulen, according to Turkey's interior ministry.

Some 150,000 civil servants were sacked or suspended after the coup attempt. Courts have imposed more than 2,500 life sentences and the defense ministry says more than 20,000 people have been expelled from the military.