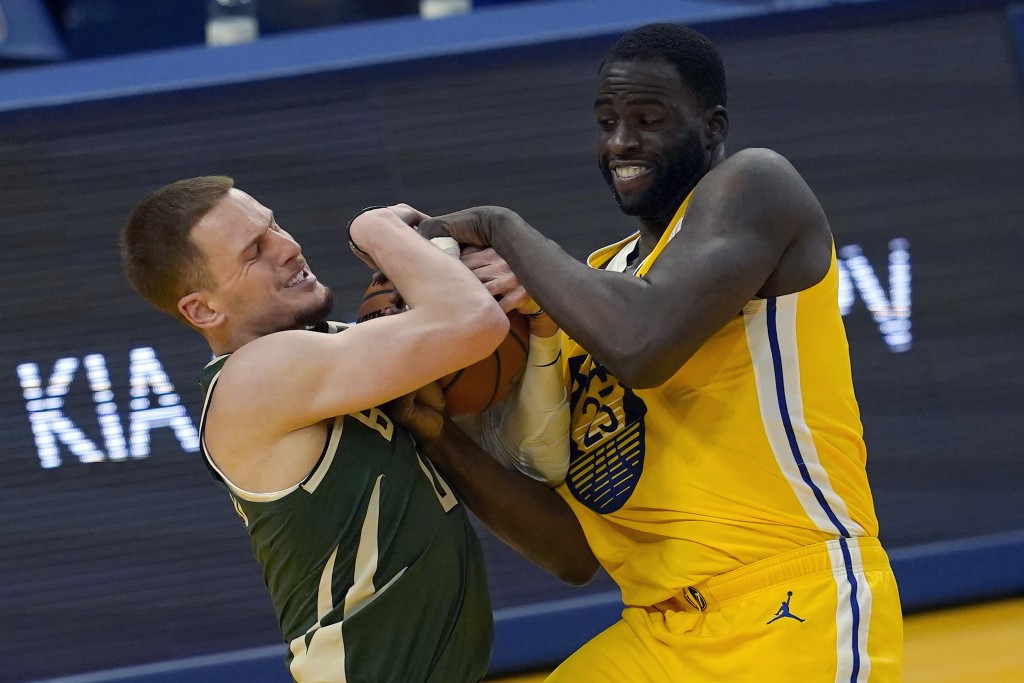 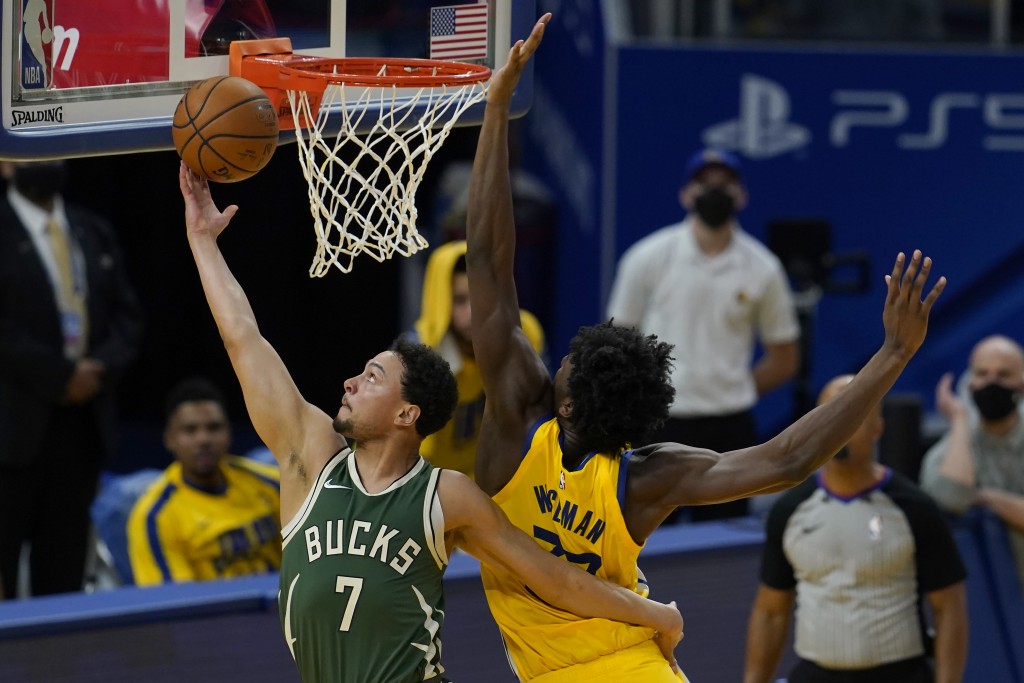 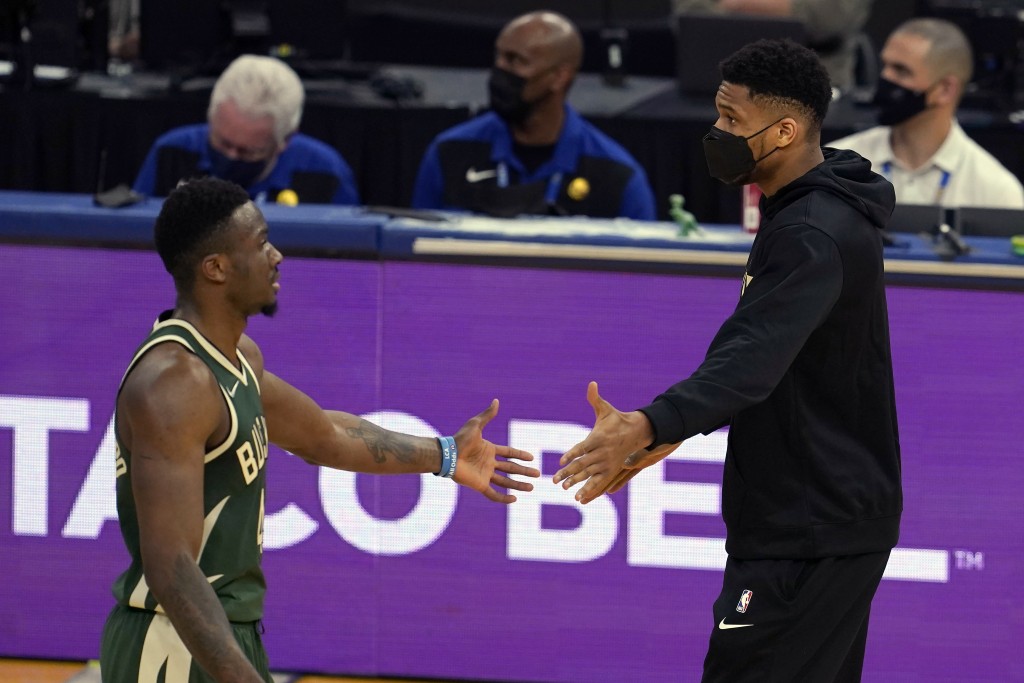 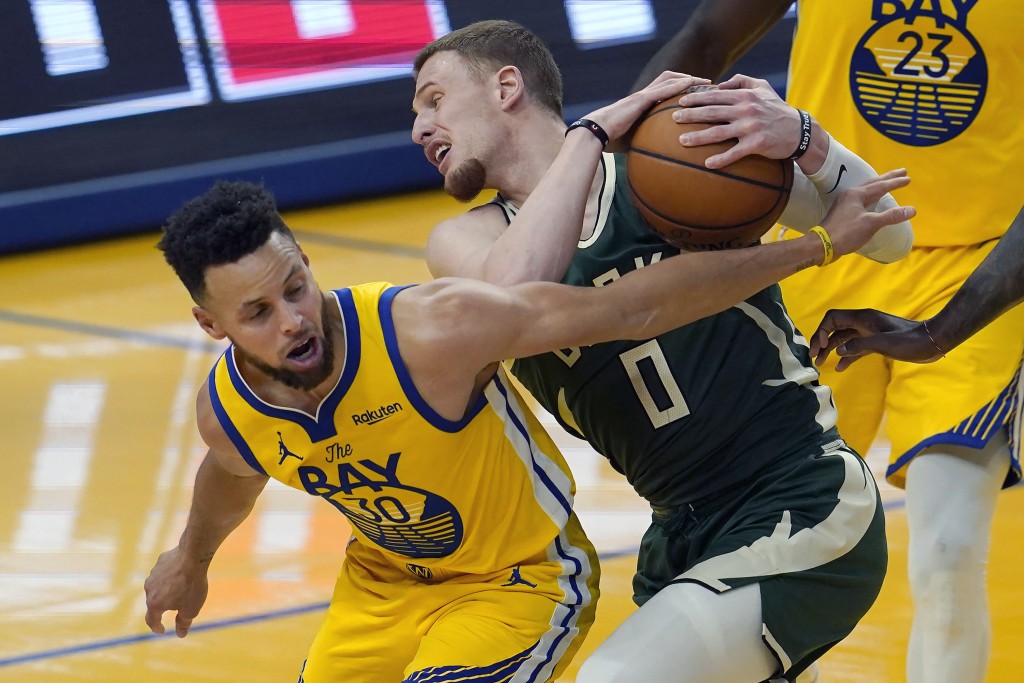 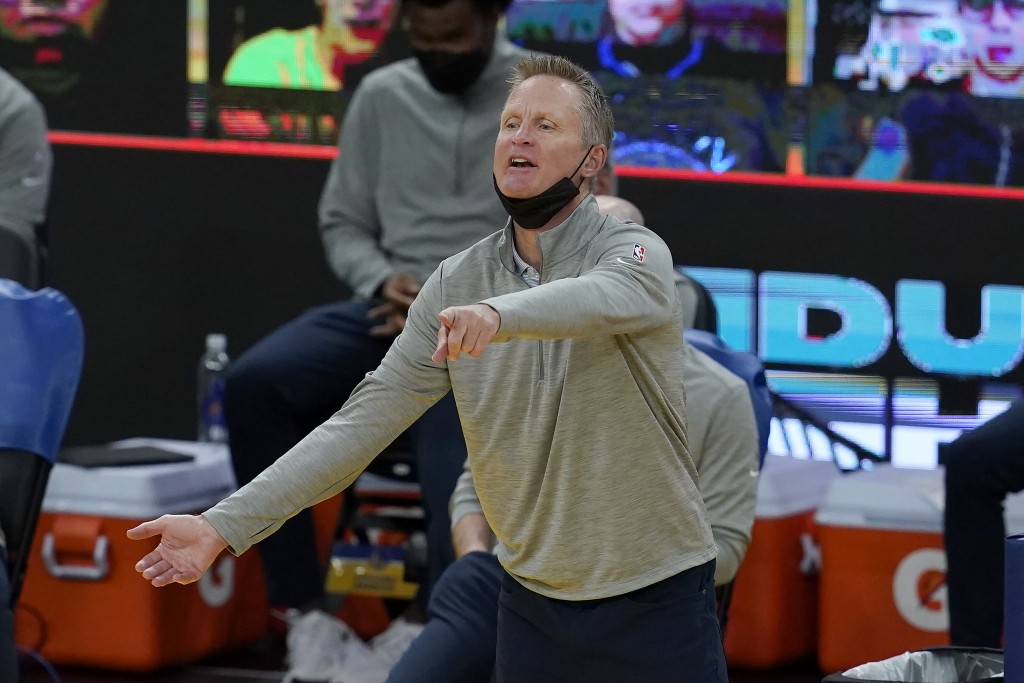 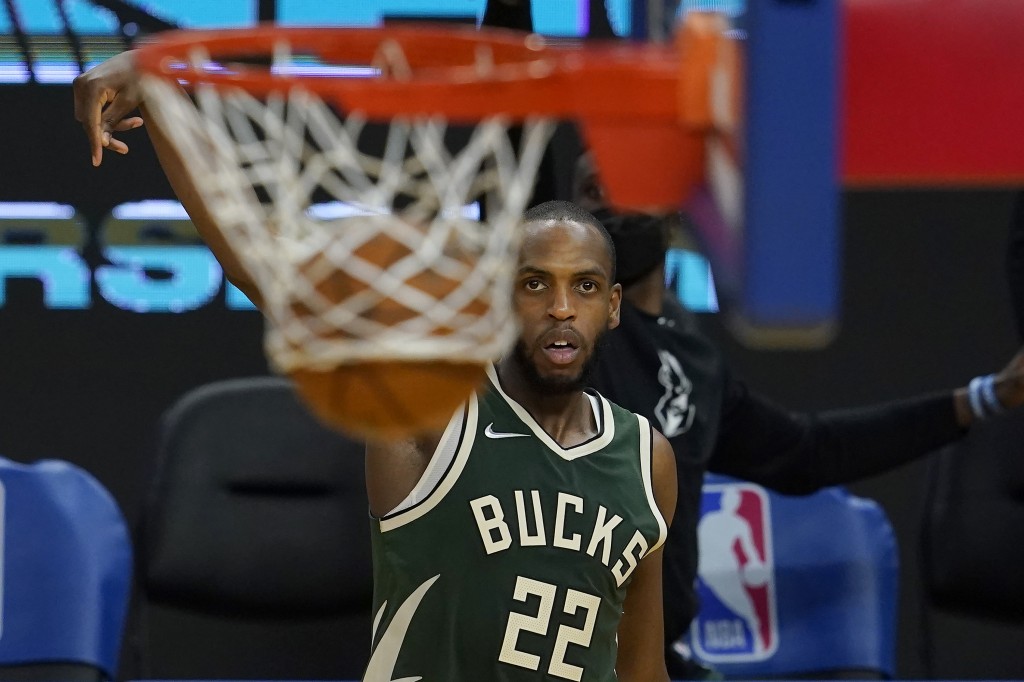 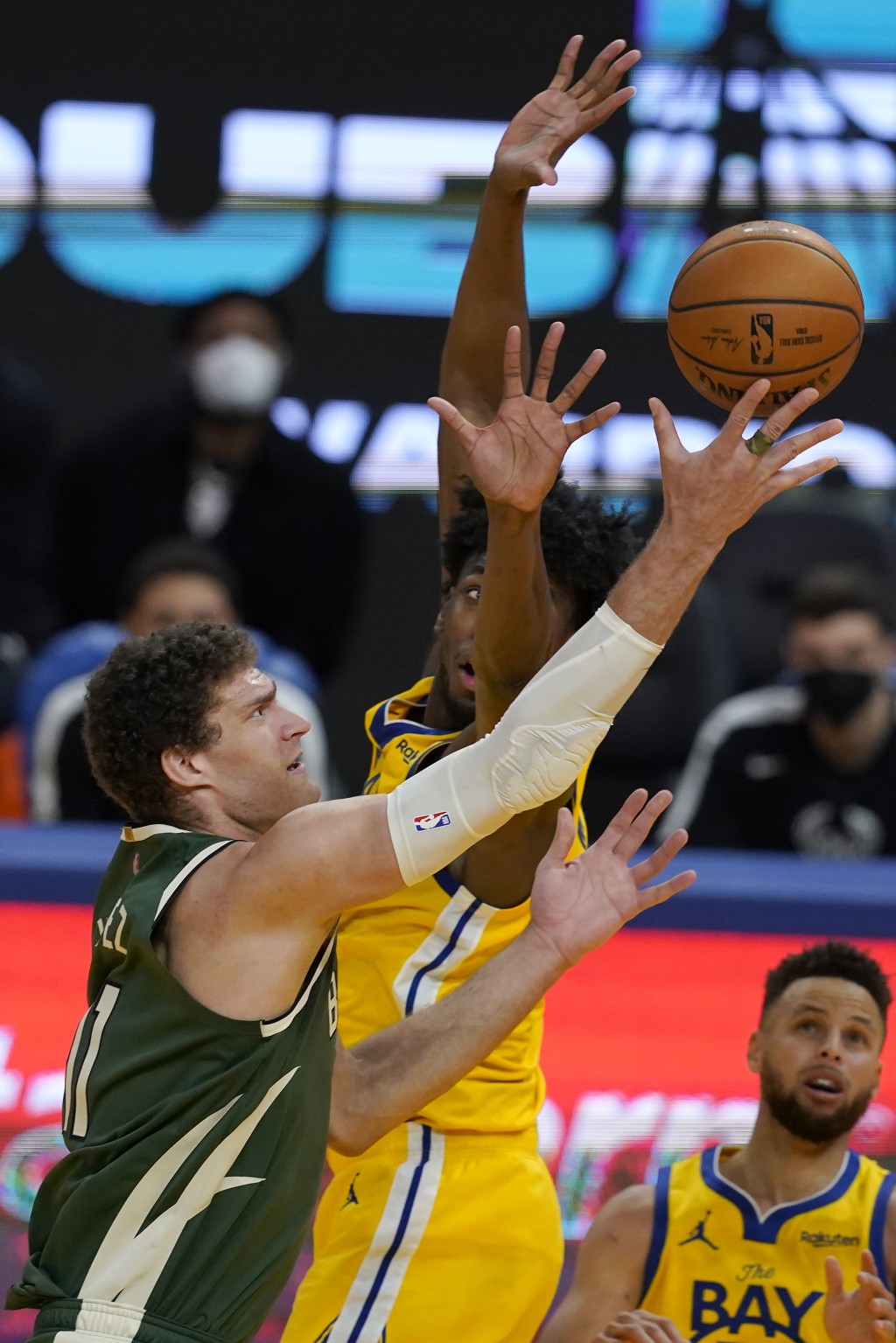 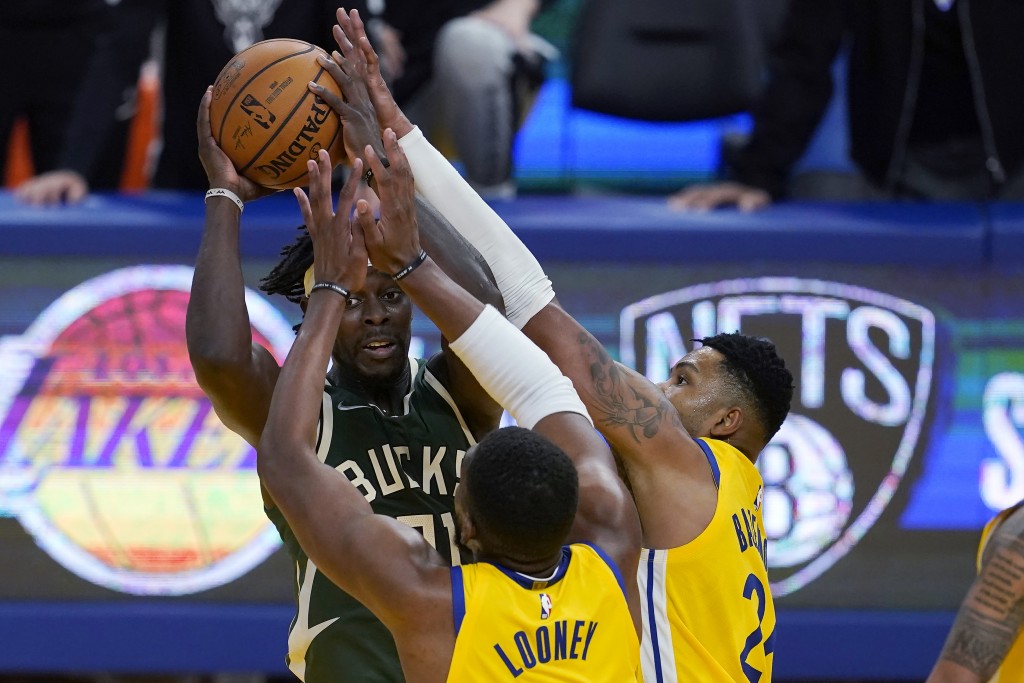 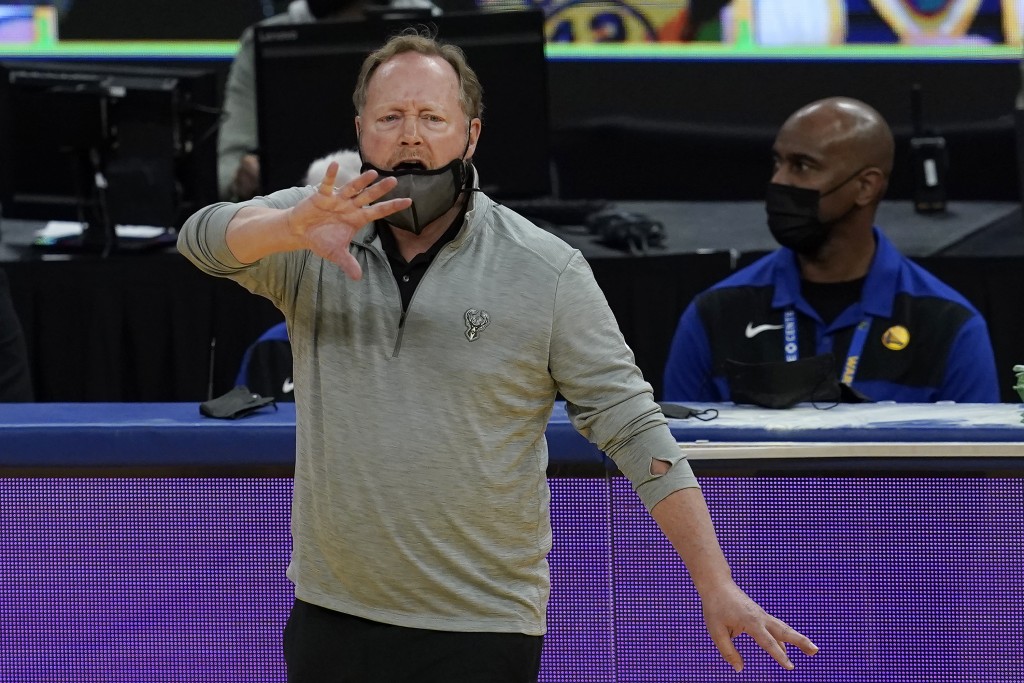 SAN FRANCISCO (AP) — Kelly Oubre Jr. converted a pair of free throws with 7.7 seconds left to give Golden State the lead, and Milwaukee missed at the end as the Warriors held off the Bucks 122-121 on Tuesday night.

In a furious finish like those Golden State teams of years past, Stephen Curry made a 3-pointer with 1:06 to play on the way to 41 points with five 3-pointers as his team worked until the final buzzer to snap a three-game losing streak.

Jrue Holiday scored the go-ahead basket after his offensive rebound with 29 seconds left.

Andrew Wiggins' driving dunk with 1:59 to play made it a one-point game, then Golden State got a defensive stop before Kent Bazemore put his team ahead the next time down.

Oubre wound up with 19 points and Bazemore scored 18 in just the Warriors' second win in nine games.

Antetokounmpo sat out his second straight game with a sore left knee after missing a 129-128 win at Sacramento on Saturday. The two-time reigning MVP, who scored 47 points to match his season high in a 127-109 win over Portland on Friday, missed his fourth game out of the Bucks’ last nine after the hope had been he would play Tuesday.

“He was warming up tonight and just felt it a little bit,” Milwaukee coach Mike Budenholzer said. “Just made the decision that tonight was not a good night, a night he should be out.”

For the Warriors, this performance marked progress on many fronts: the energy on both ends, the attention to detail that had lacked during a particularly discouraging recent road trip — and, of course, the W result.

Milwaukee had won two in a row against Golden State, including a 138-99 rout on Christmas Day, and the Bucks saw the end to a three-game winning streak on the Warriors' home floor.

Golden State came out shooting and made 7 of 11 to jump ahead 18-5 and force two early timeouts by the Bucks.

“No. 1, defending without fouling would be awesome," Warriors coach Steve Kerr quipped beforehand. "That was so disappointing the other night to really play a good game overall and compete and have a chance to win and just hack our way to a loss.”

Bucks: Reserve F P.J. Tucker missed his seventh straight game with a strained left calf. He didn’t practice Monday and has played in only three games for the Bucks since they acquired him from Houston. ... Holiday was named Eastern Conference player of the week Monday and had 33 points, 11 assists and seven rebounds at Sacramento without Antetokounmpo. Holiday signed a four-year extension Sunday that will be worth at least $134 million if he exercises the fourth-year option.

Bucks: At Dallas on Thursday night having won 21 straight against the Mavericks.

Warriors: Host Washington on Friday night in the first of two second-half matchups with the Wizards.