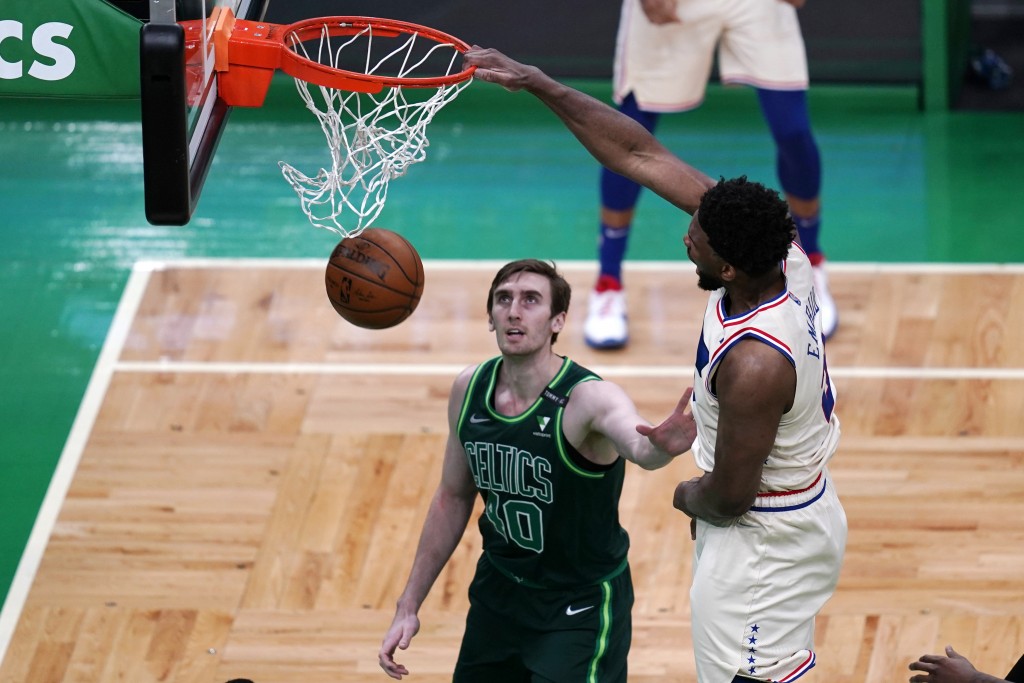 BOSTON (AP) — Joel Embiid scored 35 points and the Philadelphia 76ers rolled to a 106-96 win over the Boston Celtics on Tuesday night.

Danny Green added 17 points as the Sixers posted their third straight victory over the Celtics to sweep the season series.

The 76ers have won both games since Embiid returned from a 10-game absence while he recovered from a bruised bone in his left knee. They have won three of four overall.

Philadelphia led by 21 in the second half of the opener of a four-game trip.

Boston was trying for its first three-game win streak since early March. Jayson Tatum led the Celtics with 20 points, and Jaylen Brown finished with 17.

The Hawks sank each of their 11 3-point attempts in the third, including four from Bogdan Bogdanovic, who had 21 points. Atlanta made 20 of 31 3s overall.

Kevin Huerter had 17 points for Atlanta, which has won four consecutive games to improve to 13-4 under interim coach Nate McMillan.

Jokic also dished out 11 assists, his 83rd career double-digit assist game, two more than Wilt Chamberlain had in his Hall of Fame career.

The Nuggets got 25 points from Michael Porter Jr. and 24 from Will Barton. Denver led by as many as 28 before sitting most of its starters early in the second half.

Grant has had a breakout season in Detroit, where he brought a 22.4-point scoring average into Denver. He scored 29 points over 30 minutes to go with Saddiq Bey’s 25 points.

Pascal Siakam scored 17 of his 27 points in the fourth quarter for Toronto after hitting just 2 of 11 shots in the first half.

The Lakers’ Montrezl Harrell and Toronto’s OG Anunoby were ejected with 2:24 left in the first quarter after Dennis Schroder fouled Anunoby’s layup attempt. Several players, including Harrell, were involved in an altercation after Schroder and Anunoby squared off.

Jonas Valanciunas had 20 points and 10 rebounds, Kyle Anderson finished with 19 points and Desmond Bane added 15 points for the Grizzlies, who won their third straight.

Jimmy Butler scored 28 points and Bam Adebayo had 18 for the Heat, who had won their past four. Three weeks ago, Memphis stalled another Miami win streak at five.

Victor Oladipo, in his third game since joining the Heat in a trade with Houston, scored 16 points.

Chicago has won two straight since snapping a six-game losing streak and moved within one game of the Pacers for the No. 9 spot in the Eastern Conference. Vucevic also had five assists while going 14 of 29 from the field. All-Star Zach LaVine added 19 points, eight rebounds and six assists.

Caris LeVert led the Pacers with 20 points and six rebounds. Edmond Sumner and Jeremy Lamb each scored 15 points as Indiana lost for the ninth time in 10 home games.