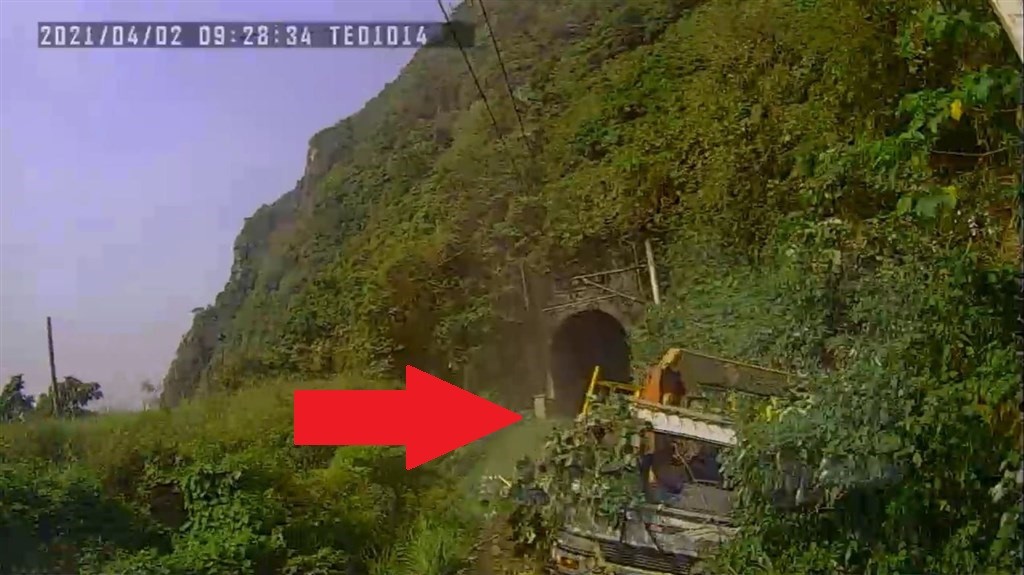 TAIPEI (Taiwan News) — Four days after the deadly Hualien train derailment, a video was released showing that the locomotive's driver had a mere seven seconds to try to halt the train after a crane truck had rolled onto the tracks.

On Tuesday (April 6), the Taiwan Transportation Safety Board (TTSB) provided the findings of the preliminary investigation into the accident based on data obtained from the train's event recorder and dashcam video footage. The presentation included video footage showing the final 10 seconds before the train's engine slammed into the truck.

TTSB Chairman Young Hong-tsu (楊宏智) stated that at 8:49 a.m. on April 2, a crane truck was seen carrying a load of tires while excavators moved earth at a railway tunnel construction project above the southbound track the train was traveling on, reported CNA. Young said the truck began to drive down an incline but deviated from the cleared path at a bend and became snagged in bushes.

The vehicle's engine stalled, and the truck slid down the hill until it came to a stop on the tracks 20 meters below. Between 9:20 and 9:25 a.m., other construction vehicles were seen heading towards it, then dust and debris were seen flying at 9:28:50 a.m., seconds after the collision had occurred.

According to Young, the Taroko Express No. 408 emerged from Heren Tunnel at 9:28:38.5, and the emergency brakes were deployed a little over five seconds later. It crashed into the crane truck less than two seconds after that at 9:28:45.5.

The engine went on to plow into the Qingshui Tunnel one second later, at which point the camera was destroyed and the footage suddenly ends. Young said he believes the truck had fallen onto the tracks approximately one minute before the accident occurred.

Young estimates that the truck did not come into the driver's view until the train was about 200 meters away and that he had only about 6.9 seconds to react before impact. Three frames show moments before, during, and after impact. (TTSB images)

He said the train was fully loaded at 358 tons and that the engine weighed 7.5 tons. Young remarked that if the incident had occurred in an open area, the train could have easily knocked the obstacle aside.

However, because it was close to a tunnel, there was not enough room for the brakes to bring the train to a halt, resulting in the crash and derailing of carriages, said Young.

The event recorder data showed that the emergency brakes had been applied three seconds before the train collided with the truck. However, Young emphasized that there are some discrepancies between the data and video footage and that the driver had probably applied the brakes sooner.

Just prior to the collision, the train was traveling at a speed of 126 kilometers per hour. When it impacted the construction vehicle, the train had slowed only slightly to 121 kph.