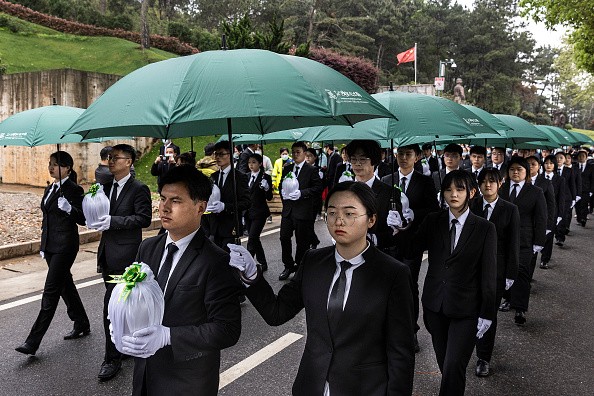 On March 22, China's Chutian Metropolis Daily reported that from March 20 to 21, over 320,000 people had already visited cemeteries and graveyards ahead of the normal peak period. This marks the first time that Wuhan residents were able to pay respects to their deceased family members since the start of the pandemic, as the city was in its final week of lockdown during the festival in 2020.

According to the staff at Wuhan's major cemeteries, the peak periods for families taking part in tomb-sweeping activities are usually March 27 to 28 and April 3 to 5. On March 20, the Xiao-en Yuan Cemetary at Longquan Mountain saw 6,000 visitors and that number doubled to 12,000 on March 21.

An article posted on NetEase that was later scrubbed stated that long lines formed across Wuhan to purchase chrysanthemums, the flowers Chinese use to pay respects to the dead. It stated that due to the fact that demand had exceeded supply, prices for the flowers were high and they soon sold out.

One factor potentially impacting the increased sale of chrysanthemums is a ban imposed by the city on fireworks, firecrackers, joss paper, and paper offerings, as well as the prohibition of incense and candles by many cemeteries as part of a "smoke-free worship" campaign. Many cemeteries are reportedly encouraging flowers and ribbons to serve as alternatives to combustible alms.

Weibo users who claimed to be Wuhan residents cited in the deleted article said that they saw unprecedented traffic jams on the official Tomb Sweeping Day on Sunday (April 4). Many said the scene was reminiscent of the throngs of Wuhan residents seen placing chrysanthemums on tombs on Feb. 11, the Lunar New Year's Eve.

According to official Chinese government statistics, 50,340 people were diagnosed with COVID-19 in the city of Wuhan, while the megapolis officially recorded 3,869 deaths.