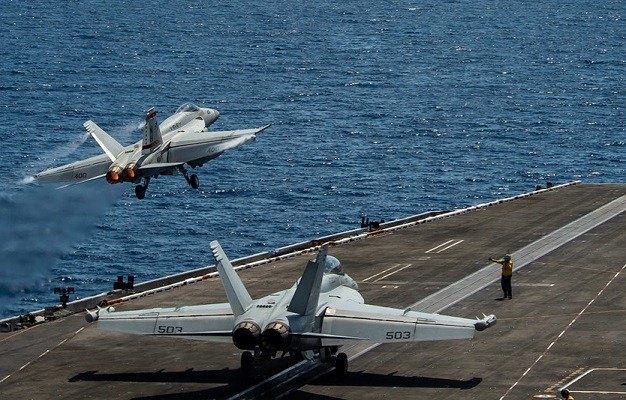 TAIPEI (Taiwan News) — A Chinese carrier group drilled in waters off Taiwan as a U.S. carrier group entered the South China Sea amid rising tensions over China's refusal to call back dozens of ships from the Philippines' exclusive economic zone (EEZ).

PLAN Spokesman Senior Captain Gao Xiucheng in a statement on Monday (April 5) said the exercises near Taiwan were aimed at testing the effectiveness of troops' training as well as enhancing their "capability to safeguard national sovereignty, security, and development interests." He added that the Chinese navy will be carrying out similar exercises on "a regular basis" in the future.

Chinese state-run tabloid the Global Times said the fact that the Liaoning carrier group's activities coincide with those of the Theodore Roosevelt is coincidental and that the maneuvers are not aimed at "any specific country" but at "Taiwan secessionists," referring to the democratically elected government of Taiwan. However, it accused the American carrier group of making "pointed provocations near China," which it said the U.S. is apt to do during Chinese holidays such as the Tomb Sweeping Festival, which got underway Friday.

The Liaoning's carrier group was accompanied by Type 055 destroyer the Nanchang, Type 052D destroyers the Chengdu and Taiyuan, Type 054A frigate the Huanggang, and Type 901 supply ship the Hulunhu. The Nanchang is the first of China's Type 055 line of guided-missile destroyers.

Rear Admiral Doug Verissimo, commander of the TRCSG, stated that the strike group has shown a "commitment to the rules-based order in the Indo-Pacific region" by carrying out operations with Japan, Australia, South Korea, India, and Malaysia. "It is great to be back in the South China Sea to reassure our allies and partners that we remain committed to freedom of the seas," he said in a statement.

The naval operations come as the Philippines and China are engaged in a diplomatic standoff over the continued presence of dozens of Chinese ships well within the Philippines 370-kilometer EEZ, where the latter is entitled to explore and exploit maritime resources.

Philippine Defense Secretary Delfin Lorenzana has on multiple occasions demanded that the ships leave, and the country has increased its military presence in the area, including by sending fighter jets on surveillance missions over the flotilla.

The issue poses a test to Philippine President Rodrigo Duterte, who many observers say has sought to placate Beijing by downplaying his country's territorial grievances in recent years. The Duterte administration also ordered 25 million doses of China's Sinovac coronavirus vaccine earlier this year.