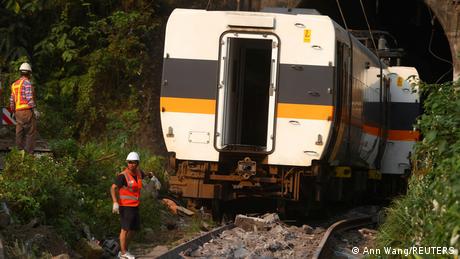 Taiwanese Transportation Minister Lin Chia-lung on Sunday offered to step down after a rail accident last week near the eastern city of Hualien left 48 people dead and nearly 200 injured. In a statement on his Facebook page, Lin said he took "full responsibility" for the catastrophe, which occurred after the train carrying nearly 500 passengers hit an errant truck that was in its path.

"I should have accepted all the criticism over the past few days, but we have not done well enough," Lin said in a Facebook post. He said he would leave his position once rescue operations had come to an end.

'I am deeply remorseful,' truck owner behind crash says

Lin's offer to resign comes after the maintenance worker whose runaway truck caused the crash made a tearful apology on Sunday.

"I am deeply remorseful and want to express my most sincere apologies," Lee Yi-hsiang, the driver of the truck said in a statement in front of reporters. "I will cooperate with the investigation by police and prosecutors."

The truck reportedly slid down a sloping road onto the railway. Lee is suspected of not using the truck's parking brake to keep it in place.

Lee is accused of causing death by negligence after he was questioned by a judge and prosecutors in a Hualien court. The court had previously ordered Lee be detained for two months, due to the belief that he may destroy evidence in the case.

Who are the victims?

The youngest victim of the crash was only four-years-old. Two Americans and a French national were among those killed in the crash.

The crash on Friday occurred during Taiwan's four-day Tomb Sweeping Festival. Train travel is popular during this time, with many Taiwanese traveling across the country to visit the graves of their ancestors.