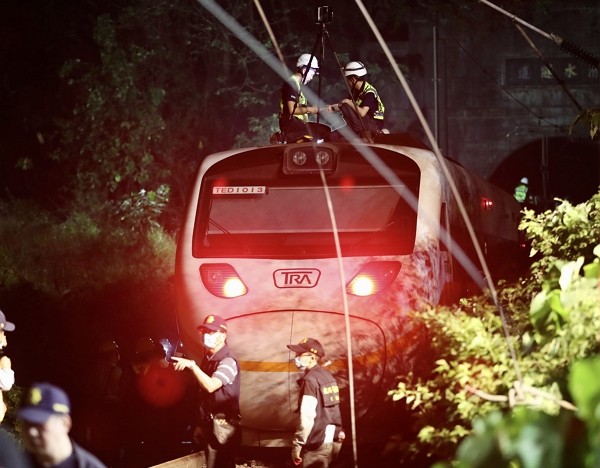 The driver of the crane truck believed to have led to the fatal train accident in Hualien County on Friday has been released. He was freed on NT$500,000 (US$17,516) bail Saturday afternoon and is forbidden from leaving the country.

TAIPEI (Taiwan News) —Taiwanese authorities have detained a construction site manager whose truck is believed to have led to the deaths of at least 50 people in the country's deadliest train accident in decades.

At 9:28 a.m. on Friday morning (April 2), the Taiwan Railways Administration (TRA) No. 408 Taroko train running from Shulin, New Taipei, to Taitung derailed as it hit a crane truck that had slid down a hillside near a construction site at the Daqingshui Tunnel in Hualien County. The preliminary investigation found that the construction vehicle had been parked on a slope without its brakes engaged, causing it to roll down and block the path of the moving train.

Local police have taken the truck's driver, surnamed Lee (李), in for questioning, and prosecutors are seeking an arrest warrant, according to Hualien Prosecutors Office head Yu Hsiu-duan (俞秀端). She pointed out that a team of investigators has been sent to the scene of the crash to preserve relevant evidence.

As of Saturday morning, the death toll from the train derailment has reached 50, including the engineer, assistant engineer, 47 Taiwanese passengers, and a French national. A total of 162 injuries classified as moderate or minor have also been reported.