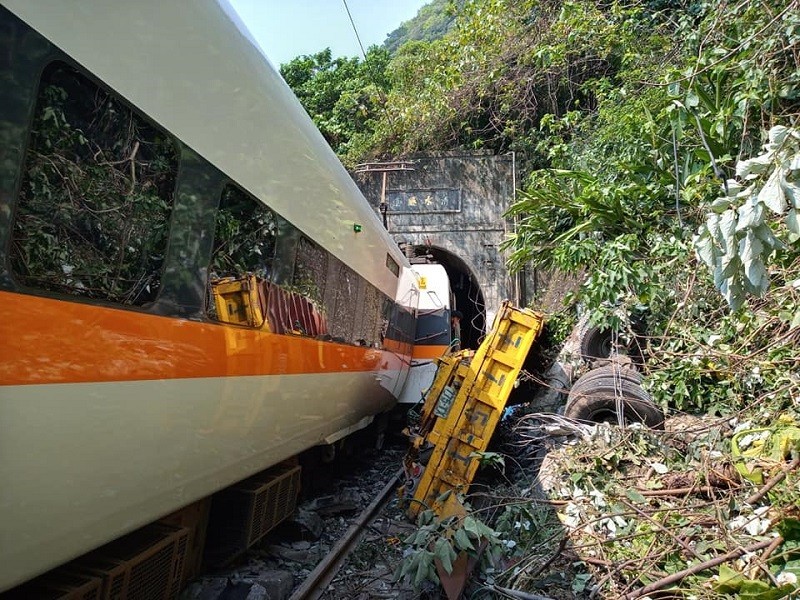 The death toll has been lowered by one to 50, including the engineer, assistant engineer, and 48 passengers. Among the passengers who perished was a Frenchman, while the number of injured remains at 146, including two Japanese and one Australian who have sustained minor injuries and are undergoing hospital treatment.

As of 7 p.m., the death toll from the train derailment had risen to 51, including the engineer, assistant engineer, one French national, and 49 Taiwanese passengers, while 146 were injured and are receiving treatment. No passengers are believed to be still trapped in the train.

TAIPEI (Taiwan News) — After a train derailment in eastern Taiwan's Hualien County on Friday morning (April 2), 34 people including the driver were reported as having no vital signs, while 72 passengers were still trapped inside.

At 9:28 a.m. on Friday morning, the first day of Taiwan's Tomb Sweeping Festival, the Taiwan Railways Administration (TRA) No. 408 Taroko train running from Shulin, New Taipei, to Taitung, suddenly derailed as it entered the Daqingshui Tunnel. The train consisted of eight cars that were carrying more 492 passengers and four crew members.

According to a report released by railway police at noon, first responders arriving at the scene found that at least 36 passengers had suffered out of hospital cardiac arrests. Some 72 passengers were believed to still be trapped inside, while 61 had been sent to the hospital.

The TRA stated that a crane truck that was improperly parked on a railway construction project is believed to have rolled down a slope and collided with the train, causing the derailment. Workers present at the project site were being questioned by investigators, CNA reported.

The tunnel is located near the 115-kilometer mark of Provincial Highway 9, which runs parallel to the southbound track of the TRA North Link Line. The second and third carriages of No. 408 Taroko train are believed to have suffered a derailment as the train entered the Daqingshui Tunnel.

Cars No. 2 and 3 slammed into the walls of the tunnel and Cars No. 4 and 5 soon followed, causing them to be badly deformed. Cars No. 3 through 8 are all reported to be inside the tunnel.

Hours after the crash, passengers were still leaving the scene, some climbing on top of the train to find their way out of the tunnel. After the incident, there was a loss of power, leading to passengers using their phone lights to appraise the situation, help others, and find a way out.

Video showing the scene of the accident: