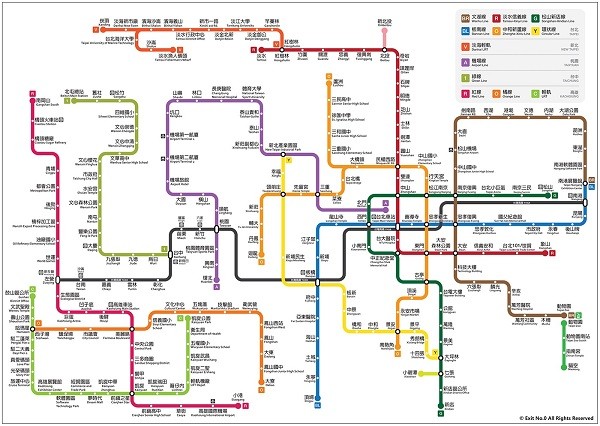 The 32-year-old illustrator who goes by the handle "Exit No.0 (零號出口)" posted a map on Facebook and Instagram that combined the MRT and LRT routes for Taipei, New Taipei, Taichung, and Kaohsiung. In addition, the illustrator has included how these systems are connected through the Taiwan High-Speed Rail (THSR) line.

From right to left are the Taipei MRT lines, the New Taipei LRT, the Airport Line, the Taichung MRT Green Line, and the Kaohsiung MRT and LRT lines. Depicted as the backbone of the whole network in black is the THSR, which starts with a connection to the Taipei MRT Blue Line in Nangang and ends with a connection to the Kaohsiung MRT Red Line at Zuoying.

When asked about the inspiration for the map, the illustrator told Taiwan News the THSR only has 12 stations and most have MRT or Taiwan Railways Administration (TRA) interchanges, "So, I wanted to connect them all together."

Noticeably absent from the map are the TRA lines, which were excluded because there was not enough room to fit them into the map, according to Exit No.0. Instead, locations with a transfer station to TRA trains are depicted with the railroad's logo and the name of the nearest station.