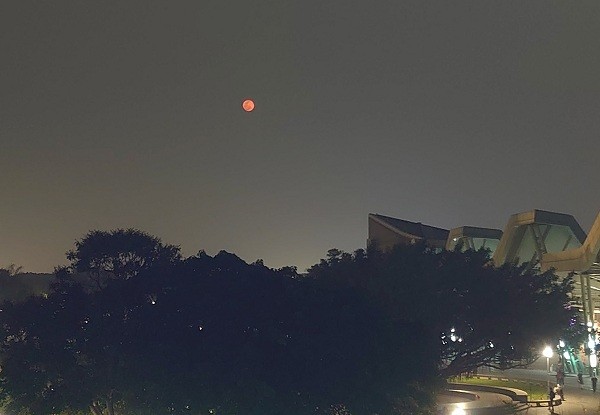 TAIPEI (Taiwan News) — Many netizens in Taipei posted photos of a “blood moon" seen Monday night (March 29) to social media, triggering discussion about the phenomenon, with some expressing fears the unusual color could be an ominous sign of disasters on the way.

Meteorologist and CEO of WeatherRisk Explore Inc Peng Chi-ming (彭啟明) joined the discussion on Facebook, saying many of his friends who witnessed the red-tinged moon asked whether it might portend some meteorological ill.

Peng said the blood moon has happened many times a year in the past but rarely so visibly. He explained the phenomenon can be caused by many different factors, referring to a report written in Chinese.

He went on to say the main reason behind Monday night’s blood moon was something called a Mie scattering, which refers primarily to the elastic scattering of light from atomic and molecular particles.

He added that winds blowing from the south on Monday night carried pollutants along the western portion of the country to the north. With many tiny particles and photochemical smog floating against cloudless skies, the moon on Monday night took on the unusual hue, he said.