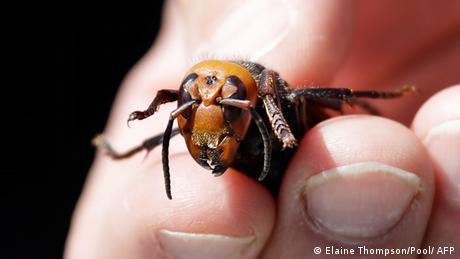 Local authorities in the Pacific Northwest of the United States and Canada's province of British Columbia are waging an aggressive campaign to eradicate colonies of "murder hornets" that appear to be gaining a foothold in the region after arriving from Asia.

Since 2019, experts in British Columbia alone have reported at least seven nests or sightings of the aggressive insects, which are native to Japan, the Korean Peninsula and other parts of mainland Asia. They have been blamed for attacks on several hives of honeybees in which entire colonies were wiped out.

There have been more cases over the border in Washington State, including incidents in which experts monitoring the sites were attacked and reported stings far more painful than from other insects.

The largest hornet in the world, an adult can grow to more than 4.5 centimeters (1.7 inches) long and have a stinger that is another 6 millimeters (0.2 inches) long.

They are usually found in forests and mountain areas and create nests by enlarging existing burrows or occupying decayed trees. The hornet feeds primarily on other insects, such as caterpillars, as well as tree sap and honey.

Commercial beekeepers have expressed concern for the well-being of their hives should Vespa mandarinia become established in North America.

"A concerted attack by several dozen workers of Vespa mandarinia can destroy an entire colony of 25,000-30,000 Apis mellifera in a matter of a few hours," Conrad Bérubé, a beekeeper and entomologist in Nanaimo, British Columbia, told DW. "Thus, the establishment of V. mandarinia in British Columbia would represent a threat to the beekeeping industry."

Japan spends around €20 million ($23.6 million) a year on eradicating hornet nests, he said, while the figure in South Korea is around €12.3 million a year. Experts in the US have estimated that should the hornet become established in the US, annual extermination costs would quickly top €27.6 million.

Charged with eradicating one nest on Vancouver Island in November 2019, Bérubé took more precautions than usual — Kevlar strappings on his wrists and ankles, in addition to a bee suit — but was still stung at least seven times. He described the pain as being like having "hot thumbtacks driven into my flesh."

Murder hornets are blamed for the deaths of around 50 people a year in Asia.

Measures have been taken to protect honeybee hives, such as traps and reducing the size of the hive entrance, although Bérubé admitted that "none of these methods seems to be entirely effective or satisfactory."

The problem, as with other invasive or artificially introduced species on other parts of the world, is that the hornets do not have any natural predators and the local flora and fauna have not developed effective defensive mechanisms as these species have not previously been exposed to this threat.

Kevin Short, a professor who specializes in environmental education at the Tokyo University of Information Sciences, has been studying Japanese hornets for 35 years.

He says they are ferocious predators but insists that they are also somewhat misunderstood.

"The Japanese media gave them the name 'murder hornets' and that's not fair as they are extremely beneficial to the environment here," he told DW. "They feed almost entirely on meat, such as the caterpillars that would otherwise devastate agricultural crops. Farmers in the mountains here welcome them."

In all the years he has been monitoring hornets, Short says he has never once been stung and that they are unlikely to attack as long as their nests are not threatened. They are particularly territorial in the late autumn months, he added, as they prepare the nest for the following year's queens.

Hornets are fully integrated into the larger environment here, he pointed out, with bees devising an effective defensive measure of simply swarming any hornet that threatens their hive, surrounding it in a "ball" of countless bees that serve to raise the intruder's body temperature to the point that it dies.

The European honeybees that have been transplanted into North American hives have not mastered that trick, Short said. Instead, they attack individually or piece-meal and are quickly killed by the hornets, which are equipped with powerful mandibles that simply decapitate the bees.

In Canada and the US, the two-fold approach to the problem is focused on trying to identify the routes that hornets are taking to get into the region and then the most effective ways of halting the colonies from spreading further, said Bérubé.

"No one knows how the hornets may have arrived in the Pacific Northwest, although the introduction and establishment of a congener species in France was traced to a cargo container shipment of terracotta flowerpots from China," he said.

Stacks of earthenware pots with gaps between the pots appear to have served as wintering chambers for Asian hornets, while similar exports from Asia are sold in garden centers in the US and Canada, he said, adding that customs and other border agencies need to devise effective ways of fumigating shipments to ensure they are not bringing invasive species into the region.

For any colonies that are discovered, the response must be timely and comprehensive, he underlined.

"Government-sponsored monitoring programs are on-going on both sides of the Canada-US border and citizen scientists are encouraged to take part in trapping campaigns and to report sightings," Bérubé said. "The two nests so far discovered in North America were destroyed upon discovery and that will remain the approach for any additional discoveries."