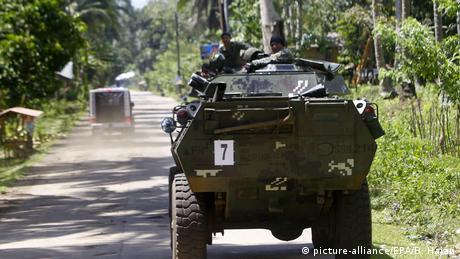 Philippine troops have tracked down and killed a leader of Abu Sayyaf and rescued the last of his four Indonesian hostages, the military announced on Sunday.

Marines wounded Majan Sahidjuan, alias Apo Mike, in a gun battle on Saturday night in the town of Languyan in southern Tawi-Tawi province.

According to Vinluan, Sahidjuan had plotted several ransom kidnappings since the early 1990s.

"We are happy that all the hostages are safe now and we are also able to neutralize the notorious 'Apo Mike' and two of his comrades," Vinluan said.

Abu Sayyaf is based in Sulu, a Muslim province in the Philippines. Since 2014, it has proclaimed allegiance to the "Islamic State" militia. The Philippines is a largely Roman Catholic nation.

The military reported that Sahidjuan and four other Abu Sayyaf militants fled from assaults in Sulu province by boat on Thursday.

They attempted to cross the sea border to Tambisan Island in neighboring Malaysia's Sabah state, where they planned to release their hostages in exchange for a ransom of about 5 million pesos (€87,000/$104,000).

Their boat capsized due to strong waves. This allowed troops, who had already been notified of the operation, to launch covert assaults and rescue three of the four hostages: Arizal Kasta Miran, 30; Arsad Bin Dahlan, 41; and Andi Riswanto, 26.

The fourth hostage, Mohd Khairuldin, 15, was found by government troops in the same village where the gun battle took place.

The four captives were among five Indonesians kidnapped by the Abu Sayyaf on January 17, 2020, off Tambisan. One of the five was killed while trying to escape.

The Abu Sayyaf has been blacklisted by the Philippines and the US as a terrorist organization for bombings, ransom kidnappings and beheadings.