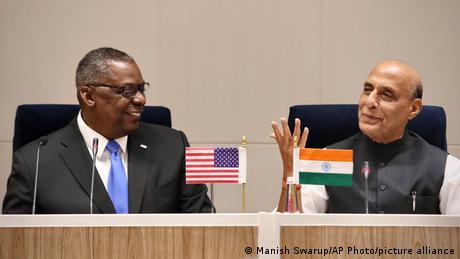 The US would like to elevate and strengthen its security cooperation with India, especially in information sharing and logistics, the US Defense Secretary Lloyd Austin told India's Defense Minister Rajnath Singh on Saturday.

Austin was in New Delhi in an effort to strengthen cooperation between countries that are seeking to push back against Chinese influence and aggression in the region.

"We discussed opportunities to elevate the US-India major defence partnership, which is a priority of the Biden-Harris administration. And we'll do that through regional security cooperation and military to military interactions and defence trade," he added.

Singh said that the meeting had focused on "expanding military-to-military engagement across services, information-sharing, cooperation in emerging sectors of defence, and mutual logistics support".

Alliances in the Indo-Pacific region

India and the US are members of the Quad, or Quadrilateral Security Dialogue, which also includes Australia and Japan.

The Quad held a summit last weekend, affirming their joint interest in maintaining a free and open Indo-Pacific region. The members also agreed to cooperate on dealing with maritime and cyber security challenges from China.

Austin also met with Indian Prime Minister Narendra Modi on Friday in the first visit by a top official in the Biden administration.

The US foreign secretary will leave India on Sunday. He already made stops in Japan and South Korea — along with US Secretary of State Anthony Blinken — as well as holding a telephone call with Australia's acting Minister of Defense on Friday.

The talks between the regional allies are seen as an attempt to reaffirm their partnership in the face of China's increasing assertiveness.

Talks between Blinken and high-level Chinese officials in Alaska on Thursday and Friday failed to thaw the frosty relations between the two countries. The US had taken a more aggressive stance against China under the Trump administration.