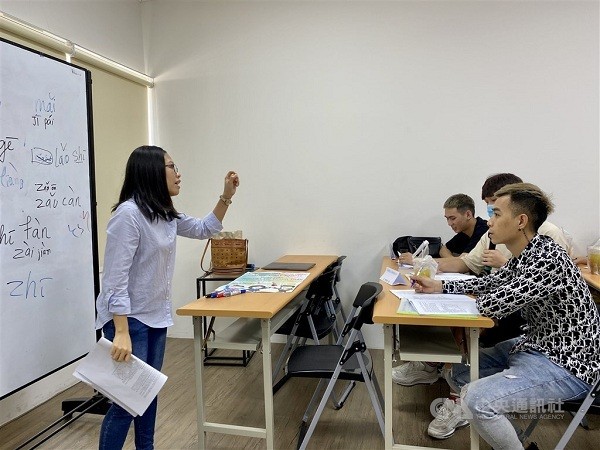 An annual free Chinese language program kicked off Saturday in central Taiwan to help migrant workers sharpen their conversation skills so that they can gain confidence assimilating into Taiwanese society and have better communication in the workplace.

Some 40 students, split into two groups and led by their respective instructors, Vietnamese, Filipino and Indian workers practiced pronunciation and daily conversation drills, where they learned how to introduce and express themselves. A class for Indonesian workers will begin Sunday.

Correct pronunciation of tones was also taught Saturday, as the aim of the course is to allow the workers the opportunity to engage in meaningful interactions with local Taiwanese in Mandarin, the instructors said.

"They can use the Chinese learned here in many situations, such as buying things, communicating with colleagues in the workplace, and developing relationships with locals," said one of the instructors.

Originally a Chinese language teacher from Vietnam, the instructor was able to understand the many language barriers that her compatriots face when making a living abroad.

One of her students, Bui Van Nam, a Vietnamese factory worker currently working in a plastic manufacturing facility in Taichung, said that when he came to Taiwan six years ago, he had difficulty communicating with his superior and had to complete tasks by mimicking the actions of others.

Even though over time he started to catch on his Mandarin, he hopes to learn more and broaden his confidence with the language, Bui said.

"I want to improve my language ability so I can one day be a translator and a better worker for my employer," Bui said, adding that he has also found interest in the Chinese language.

Meanwhile, another student, Gorby Joy, an engineer from India who has been working in Taiwan for around a year, echoed the same sentiment about the importance of learning Chinese.

"If I want to survive here in Taiwan, I must learn and speak Chinese. If I don't know Chinese, I will not make any progress here in my job," Joy told CNA.

The courses are designed not only to help the workers learn Mandarin but also teach them about Taiwanese culture so that they can feel closer to their employers, said Chen Jui (陳瑞), chairman of the Taiwan Federation of Labor Union, which is working with the Taichung's Labor Affairs Bureau to organize the language classes this year.

The union is also planning to hold a course in August for Hoklo, a variety of the Hokkien language spoken by most Taiwanese.

The language program was introduced in 2017 and has been held every year, according to Taichung City government's Labor Affairs Bureau.

With the opening of this year's classes, a total of 10 rounds of 50-hour courses are expected to be held for 2021, the bureau said.

A total of 255 students were enrolled in the program last year, according to statistics provided by the bureau.

As of the end of January, there were 104,712 migrant workers in Taichung, according to Ministry of Labor statistics.