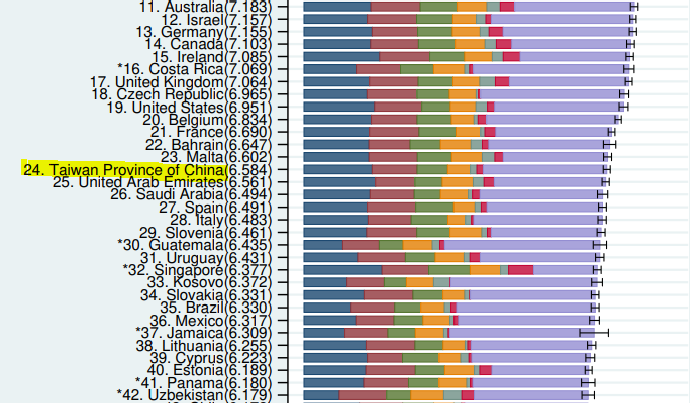 TAIPEI (Taiwan News) — Taiwan has lodged a protest against a recent global happiness report issued by the United Nations for listing it as part of China.

On the eve of International Day of Happiness (March 20), the Sustainable Development Solutions Network for the U.N. released its World Happiness Report 2021, a global ranking of happiness levels across 149 countries. While Finland once again retained the top spot, Taiwan was ranked as the happiest nation in East Asia and the 24th happiest in the world.

Despite the honors, the report incorrectly labeled Taiwan as a "province of China" since it is not a member of the U.N. The incorrect designation follows in the footsteps of all previous happiness reports released by the U.N.-affiliated group since 2012.

In response, Taiwan's representative office in New York said in a Twitter post that it has launched a protest demanding respect for the country's sovereignty and integrity. Emphasizing "Taiwan is a country," it said listing Taiwan under Chinese rule is "false, unacceptable, and a blatant disregard of the country's vibrant democracy.”

The office also wrote that Taiwan is a place where "democracy and human rights are upheld and protected, unlike in China." It pointed out that designating Taiwan as part of China "takes away the work of the Taiwanese people."

Meanwhile, the Ministry of Foreign Affairs also expressed dismay about the mislabeling in the World Happiness Report. It stressed that Taiwan has its own government and sovereignty and has never been governed by the Chinese Communist Party.

Since the U.N. survey is about happiness and well-being, it should take into account the happiness of Taiwanese, the ministry added.

Presidential Office Spokesperson Kolas Yotaka also wrote on Twitter that Taiwan "would be much higher" on the rankings if the U.N. stops calling it the "province of China." Many netizens echoed her comment by stating that Taiwan is indeed a country separate from China.