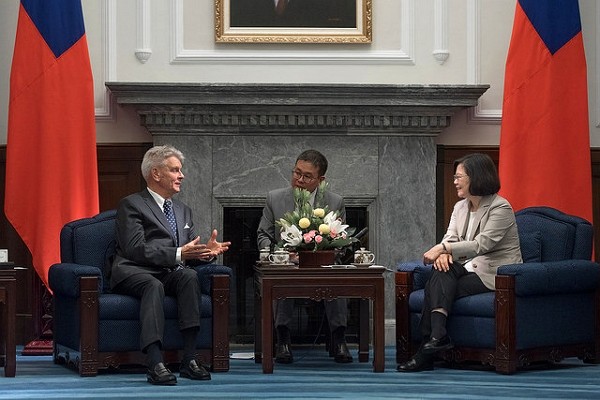 TAIPEI (Taiwan News) — The French foreign ministry said Wednesday (March 17) that the country's lawmakers are free to meet with whomever they wish after Senator Alain Richard received a letter from the Chinese embassy asking him to cancel a trip to Taiwan.

On Monday, La Lettre A reported that Chinese Ambassador to France Lu Shaye (盧沙野) had written Richard, who chairs the Senate's France-Taiwan Friendship Group, to warn against the group's trip to Taiwan this summer. Writing that "Taiwan is an inalienable part of China," Lu urged Richard to avoid any form of official contact with the Taiwanese government, as this could "threaten the status quo between Beijing and Taipei."

Richard was "very displeased" by the tone of the letter, and he will give a clear reply to the Chinese embassy, according to the report. Meanwhile, Taiwan's envoy to France Wu Chi-chung (吳志中) stressed that Taiwan is a "sovereign state" and that Lu has no authority to interfere with its diplomatic affairs.

In response, Lu presented the controversial letter on Tuesday, criticizing the Taiwanese authorities and "certain French media" for lacking knowledge about international relations. He argued the letter was a "righteous act" to protect China's territorial integrity and accused the Taiwanese government of trying to sabotage Beijing's relationship with France.

During a press conference on Wednesday, the French foreign ministry spokeswoman emphasized that "French parliamentarians can freely decide their travel and their contacts." She did not comment on whether the lawmakers' trip to Taiwan would violate the "one-China policy," as Lu had suggested.

Meanwhile, Richard has informed the Chinese embassy about his intention to carry out the Taiwan visit in a written letter, according to AFP. While members of the France-Taiwan Friendship Group are aware of the French government's diplomatic stance, they will not cancel their meetings with the Taiwanese authorities, he wrote.

Speaking at a regular press event on Thursday, Taiwan's Ministry of Foreign Affairs (MOFA) spokeswoman Joanne Ou (歐江安) thanked Richard and the French government for supporting the country's friendship with Taiwan and the values of freedom and democracy. She said Beijing's "wolf warrior" diplomacy is the main reason for tensions in the Taiwan Strait and urged the global community not to yield to Chinese pressure.