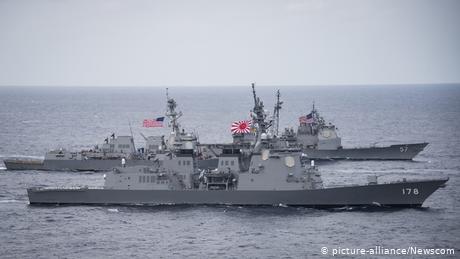 Japan and the United States on Tuesday condemned Chinese "coercion and aggression" in the Indo-Pacific region.

In a joint statement after a meeting in Tokyo, the two nations' foreign and defense ministers said they will not tolerate Beijing's "destabilizing behavior."

The statement was released after talks between US Secretary of State Antony Blinken and Japanese Foreign Minister Toshimitsu Motegi and the two nations' defense ministers, Lloyd Austin and Nobuo Kishi.

Blinken and Lloyd were making their first overseas trips as members of the administration of US President Joe Biden, underlining the importance that Washington places on stability in the region.

Analysts described the strong wording of the statement as "unprecedented" but emblematic of just how concerned Tokyo and Washington have become at Beijing's efforts to gain the military, economic and geopolitical upper hand in Asia and beyond.

"The wording of this statement is surprising in its strength, particularly from Japan's perspective as Tokyo generally prefers to take a more delicate or diplomatic approach," Go Ito, a professor of international relations at Tokyo's Meiji University, told DW.

"I would have to say that this is quite unprecedented. But it is also clear that there has been a lot of frustration within the Japanese government that Beijing is effectively ignoring the international community's appeals for moderation and concern at the economic, diplomatic and military power that they are using in the region," he said.

"That has less impact on Japan, of course, but it does enable Beijing to exert a lot more influence over smaller and less developed nations in the region."

In the statement, the ministers expressed their objections to China's "unlawful" claims to islands and surrounding ocean areas in the South China Sea, where Beijing has unilaterally occupied and militarily developed territory that is also claimed by Vietnam, the Philippines, Taiwan, Brunei and Malaysia.

Japan and the US also called for "peace and stability" in the Taiwan Strait, where China has in recent months stepped up its military presence as it seeks to intimidate the government in Taipei. Beijing insists that Taiwan is a renegade province that will one day be incorporated into greater China, by force if necessary.

The joint communique also warned China off the Senkaku islands, known in China as Diaoyu islands, an uninhabited archipelago that is administered as part of Japan's Okinawa Prefecture but is claimed by Beijing as part of its territory.

"My sense is that, given this very strong reaction from Japan and the US, China may quieten down a little and attempt to use its power to draw in more developing countries to its own side in this developing confrontation," Ito said. "Beijing will be aware that it needs more friends."

Blinken and Austin are scheduled to travel on to South Korea on Wednesday for talks with Washington's other major ally in northeast Asia, where they will hold another two-plus-two meeting with their local counterparts, Foreign Minister Chung Eui-yong and Defense Minister Suh Wook.

The challenges posed by China and North Korea will once again dominate the agenda, but the two sides will use the opportunity to sign an agreement on the amount that Seoul pays for the upkeep of the 28,500-strong US military presence in the South.

Under ex-President Donald Trump, the two nations had been at loggerheads over the amount Seoul had to pay, but a deal has since been reached to raise the annual figure by 13.9% to $1.04 billion (€870 million).

The US is expected to encourage South Korea to bury its historical differences of opinion with Japan to reinforce the trilateral alliance and to play more of a part in the Quad alliance.

In a joint opinion article printed in the Washington Post immediately before Blinken and Austin left for the region, the two leaders wrote: "Our alliances are what our military calls 'force multipliers.' We are able to achieve far more with them than we could without them.

"It would be a huge strategic error to neglect these relationships," they added. "And it's a wise use of our time and resources to adapt and renew them, to ensure they are as strong and effective as they can be."

Calls have been growing louder in South Korea for the government of President Moon Jae-in to work more closely with the Quad grouping, which includes the US, Japan, India and Australia.

Seoul "cannot afford to repeat the trials and errors of the past, particularly when it comes to dealing with North Korea, said an editorial in the Korea JoongAng Daily newspaper.

Leif-Eric Easley, a professor of international studies at Ewha Womans University in Seoul, told DW that the Quad is critical to South Korea because it "will be a pillar of the Biden administration's foreign policy."

"The Quad is not an anti-China alliance, it's a coalition of like-minded countries addressing common challenges and committed to a rules-based order," he said. "The Quad summit will spur cooperation on the pandemic, climate change and technology supply chain security.

"Beijing will not be a target unless it violates norms, including freedom of navigation, peaceful resolution of disputes, trade commitments and human rights," the expert added, issues that are all in Seoul's national interests.

"Demonstrating that it is a contributing stakeholder in a free and open Indo-Pacific will give Seoul greater diplomatic leverage for dealing with North Korea," he said.