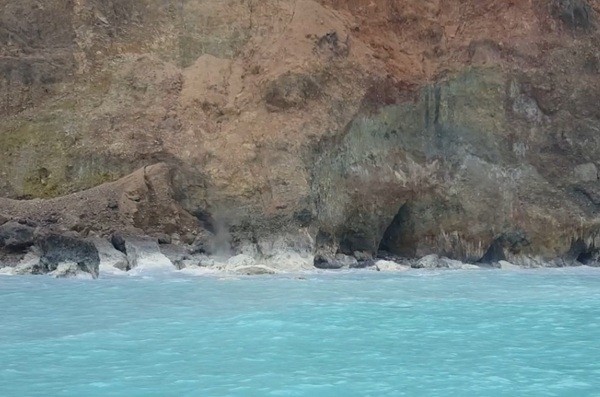 TAIPEI (Taiwan News) — After a long hiatus, white smoke was spotted emitting from fumaroles on one end of Turtle Island off the coast of Yilan on Monday (March 15) by a group of tourists on a boat.

A whale-watching boat was circling the island, which reopened to tourists in March, after having no luck spotting whales or dolphins, CNA reported.

When the boat approached a popular spot for photography known as the “milk sea,” white smoke could be seen emitting from gaps in the volcanic rock under the “head” of the turtle-shaped island.

The reemergence of the phenomenon excited tour guide Chang Chan-wei (張展維), who urged tourists to take pictures of the rare wonder.

Chang said he remembered seeing the “Turtle Island sulphur smoke” during a boat ride as a child. As a tour guide for nearly 10 years with over 1,000 excursions under his belt, he had never seen the famous attraction in his professional life until this afternoon.

He explained that according to media reports, the smoke had ceased after earthquakes rocked the island in 2004.