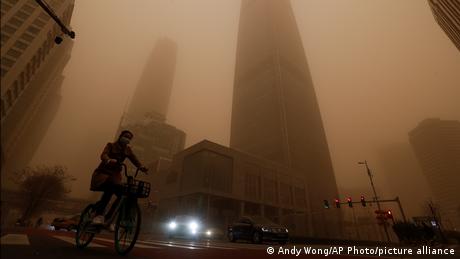 Beijing and parts of northwestern China were covered in a layer of thick dust on Monday brought by heavy winds blowing in from the Gobi desert.

More than 400 flights were canceled at both of Beijing's airports, skyscrapers were obscured in a thick brown haze, and morning traffic was snarled with visibility greatly reduced.

"This is the most intense sandstorm weather the country has seen in 10 years," China's National Meteorological Center said on its website, as sandstorms spread from Inner Mongolia into the provinces of Gansu, Shanxi and Hebei, which surrounds Beijing.

China's Environment Ministry said the dust cloud should shift south and clear the Beijing area by Wednesday or Thursday.

Meanwhile, Beijing's air quality index reached a maximum reading of 500 on Monday, which is considered hazardous to health. The concentration of dust particles in some Beijing districts measured 8,000 micrograms per cubic meter.

For comparison, a good air quality index is between 0 and 50, with no more than 50 micrograms of dust per cubic meter.

To make matters worse, Beijing was already suffering from higher levels of air pollution in recent weeks, with consistent smog hanging over the city.

Sandstorms are common in northern China usually from March to April, as spring winds lift dust from the nearby Gobi desert. Deforestation and soil erosion also contributes to the storms.