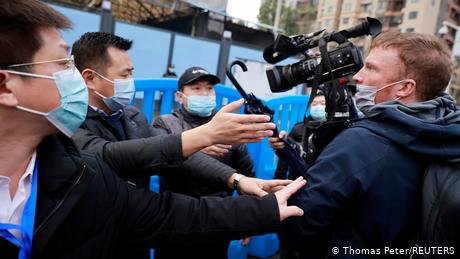 Earlier this month, the Foreign Correspondents’ Club of China (FCCC) released its 2020 annual report, pointing out that China has stepped up efforts to frustrate the work of foreign correspondents using all arms of state power, including surveillance systems introduced to curb the coronavirus.

Mathias Bölinger, a DW journalist based in China, said while the situation in China has deteriorated over the last few years, it has dramatically worsened over the last year. “It has become harder to find interviewees and scheduled interviews are often cancelled,” Bölinger said.

He added that Chinese people are less willing to talk about political topics and are often warned not to give interviews to foreign journalists. Foreign correspondents are also facing more and more restrictions in other aspects.

“Previously, foreign journalists were only followed by Chinese police in sensitive regions like Xinjiang, Qinghai, and Inner Mongolia, but now foreign journalists are also being followed in major cities, such as Hangzhou,” Bölinger said. “In addition, quarantine rules, such as isolation rules, are being used arbitrarily, especially in Xinjiang.”

Steffen Wurzel, a Shanghai-based correspondent for the ARD, also pointed out to DW that the working conditions for foreign journalists in China have deteriorated dramatically in the last year. He said the biggest problem is that almost all topics have been highly politicized by the Chinese leadership during the coronavirus outbreak.

"When it comes to political topics, it's almost impossible to find people to interview in China, whether the topic is on the pandemic, the impact of the pandemic, the Olympics, or economic plans," said Wurzel.

"All topics are politicized, and even cultural reporting is becoming increasingly difficult. Many doors are already closed, but now even more doors are closed. Interviewees are often told directly or indirectly that they can't, or shouldn't be interviewed by foreign media."

Wurzel has the experience of being stalked. In a survey conducted by the FCCC, he talked about being on vacation in Inner Mongolia last May, where he was followed by several police officers. "We were also kicked out of the hotel," Wurzel said. "When we were not in the hotel room, our luggage was opened and probably searched. I took pictures of the stalkers and they forced me to delete them."

Wurzel told DW that another big problem is the travel ban. He said foreign journalists are now often unable to leave China because it is difficult to get back into the country once they have left. For journalists with family members in Europe or elsewhere, this is of course a big problem.

The FCCC said in the 2020 report that for three years in a row, no foreign journalists felt their working conditions had improved. Last year, the authorities even banned journalists from sensitive areas and threatened them with forced isolation on public health grounds.

In addition, China has been using visa restriction to put pressure on foreign correspondents. For example, at least 13 journalists have been issued press cards valid for less than six months, whereas normally foreign journalists in China are issued visas valid for one year.

As tensions between the U.S. and China grew, China expelled 18 China-based journalists from the New York Times, the Wall Street Journal and the Washington Post in the first half of last year.

Last September, two Australian journalists in China were also forced to leave the country. After being questioned by Chinese state security personnel, ABC correspondent Bill Birtles in Beijing and Australian Financial Review's correspondent Michael Smith in Shanghai sought protection at the Australian embassy and consulate for several days before they left China. The Australian Broadcasting Corporation (ABC) said Birtles had been barred from leaving China.

Restriction of reports that don’t adhere to Chinese vision

According to Chinese officials, Chinese citizens can only work as assistants at foreign news agencies in China and they are not allowed to report independently. In a statement, Chinese officials said: "The Chinese citizen surnamed Fan was detained by the Beijing Municipal State Security Bureau on suspicion of criminal activities against national security." The FCCC issued a statement expressing solidarity with Fan, saying it was concerned about her arrest and was seeking clarification from the Chinese government about the incident.

“Despite what China says about wanting to be open to the world and to show everybody what a vibrant society it is, they clearly restrict reporting of anything that doesn’t adhere to their vision,” Steven Lee Myers, Beijing bureau chief for the New York Times told the FCCC. "It’s suggestive of a climate that’s not going to get any better."