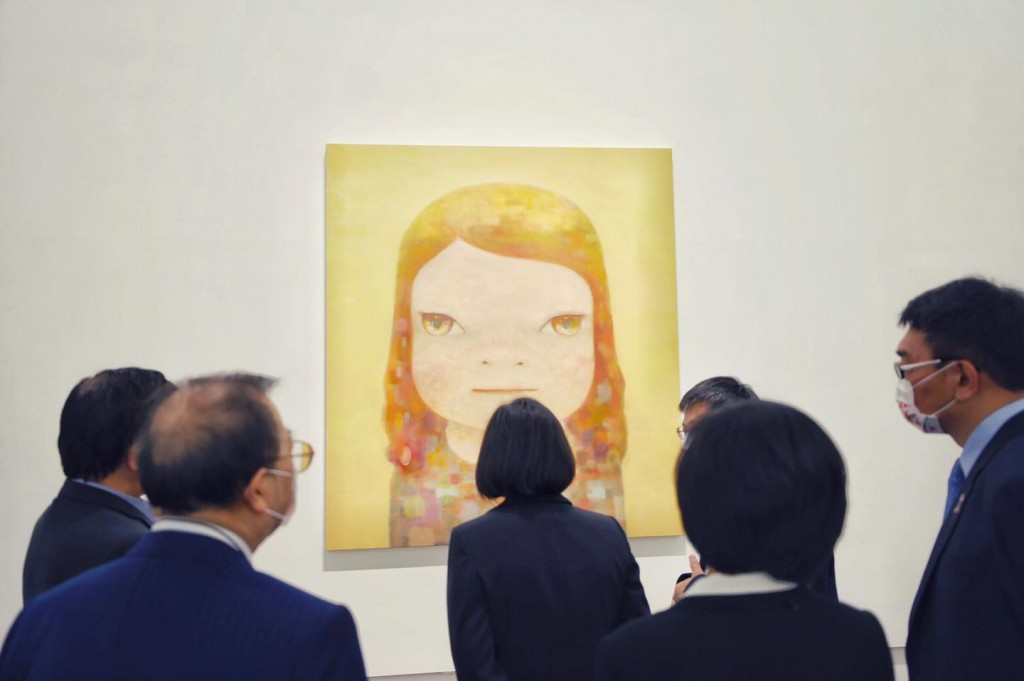 President Tsai Ing-wen (蔡英文), Minister of Culture Lee Yung-te (李永得), and Japanese representative in Taiwan Izumi Hiroyasu (泉裕泰) all appeared at a press conference for a sneak peek on Thursday.

The exhibition features the veteran artist's signature two-meter-long painting titled “Miss Moonlight,” which was made in 2020 and is usually displayed at the Mori Art Museum in Tokyo, along with his latest drawing titled “Hazy Humid Day,” with a version made just for Taiwan, according to the General Association of Chinese Culture (GACC).

This year marks the 10th anniversary of the severe earthquake and tsunami that hit Tohoku and the closer Taiwan-Japan ties that emerged afterward. Nara arrived in Taiwan to personally show his gratitude and respect for the Taiwanese people, he said in a video. Nara shared that after the disaster, a lot of things changed in Japan — not only his childhood environs but also his psychology, all of which is reflected in his art.

"I felt the tsunami also washed away my passion to create," said Nara. "I couldn't draw again with a big empty hole in my heart, so instead I began to make sculptures with clay."

As a way to regenerate, the artist began to play with mud. After a year of working through his trauma, Nara finally had the courage to pick up his brushes and face the canvas again.

At 61, the artist has become less rushed and more peaceful, which is revealed through his recent work, including “Miss Moonlight.” In the picture, a woman closes her eyes in what seems like a restful pose in front of a black background.

"'Miss Moonlight' was created under unexpected circumstances,” said Nara. “I just finished it naturally in the early spring in 2020. It feels like she is telling me 'It’s ok to take a rest!'"

Meanwhile, Nara's newest work, “Hazy Humid Day,” is another soothing piece. Painted in bright, warm colors with her big eyes open, the girl in “Hazy Humid Day” is a contrast to her neighbor.

"It has a deeper meaning than it looks," expressed Nara. "I also finished this piece with a peaceful mind, and it further revealed how I feel toward Taiwan."

The other highlight is a large-scale art installation titled “Fountain of Life,” which has tears falling down faces into a pond of blue water.

All the presented works in the exhibition were created between 1984 and 2021.

The show will take place at the Kuandu Museum of Arts from March 12 to June 20. It will then head to the Kaohsiung Museum of Fine Arts in July, followed by the Tainan Art Museum in November.