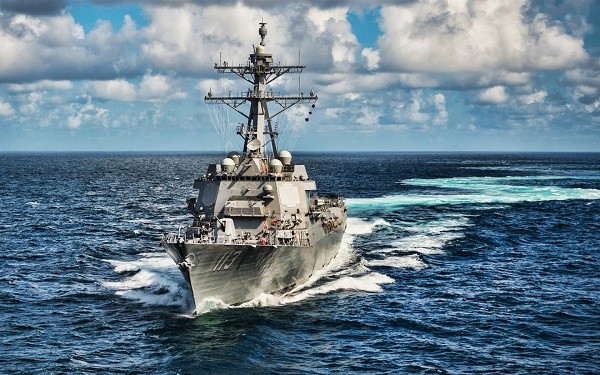 The U.S. Navy's 7th Fleet on Wednesday announced that the Arleigh Burke-class guided-missile destroyer USS John Finn (DDG 113) had carried out a "routine Taiwan Strait transit" that day "in accordance with international law." The 7th Fleet emphasized that the warship's passage "demonstrates the U.S. commitment to a free and open Indo-Pacific."

The statement added that "The United States military will continue to fly, sail and operate anywhere international law allows." The warship had been part of the Theodore Roosevelt Carrier Strike Group, which is currently conducting operations in the Celebes Sea between the Philippines and Indonesia, USNI News Fleet and Marine Tracker reported this week.

The John Finn is believed to have broken off from the group at some point to conduct its solo mission through the Taiwan Strait on Wednesday. The 7th Fleet's announcement included a video of an MH-60R Sea Hawk helicopter taking off from the ship's flight deck, while a second video shows the forward deck of the vessel.

The two previous American missions in the strait carried out this year under the Biden administration include a transit by the USS Curtis Wilbur (DDG-54) on Feb. 25 and one by the USS John S. McCain (DDG 56) on Feb. 4.

Thursday morning (March 11), Taiwan's Ministry of National Defense (MND), announced that the U.S. destroyer had sailed through the Taiwan Strait from north to south. The MND stated that during the ship's southward journey through the strait, the military used joint intelligence, surveillance, and reconnaissance to monitor movements at sea and in the air around Taiwan and described the situation as normal.