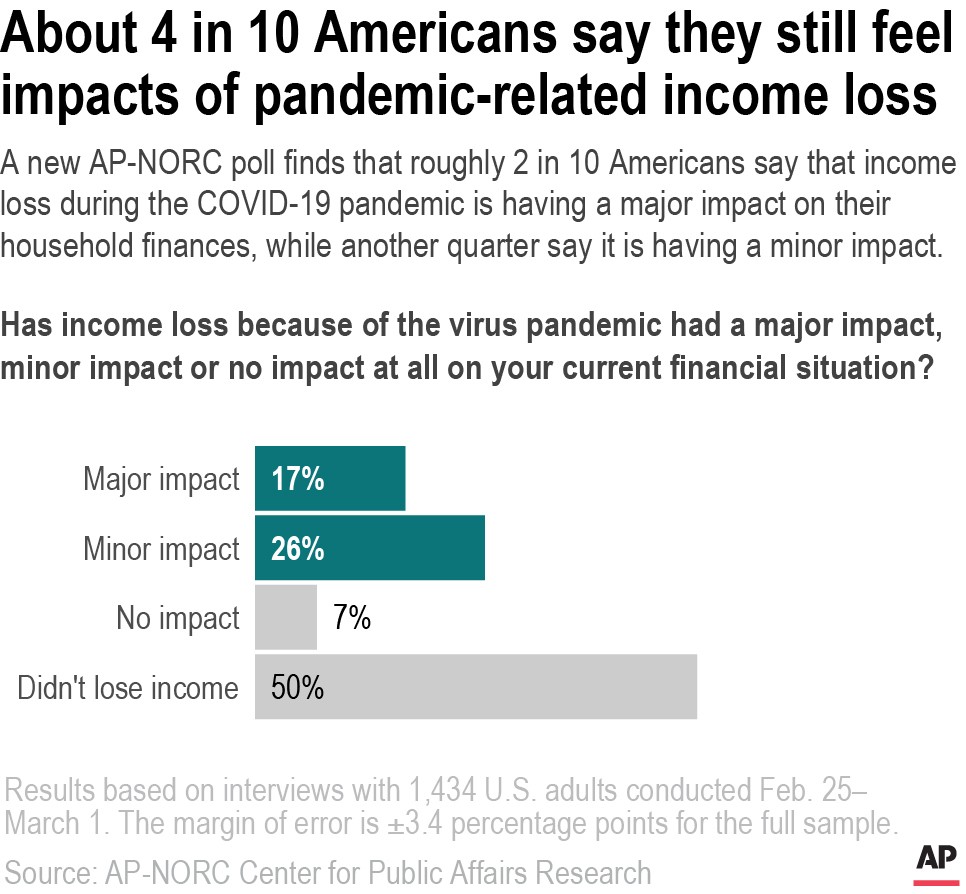 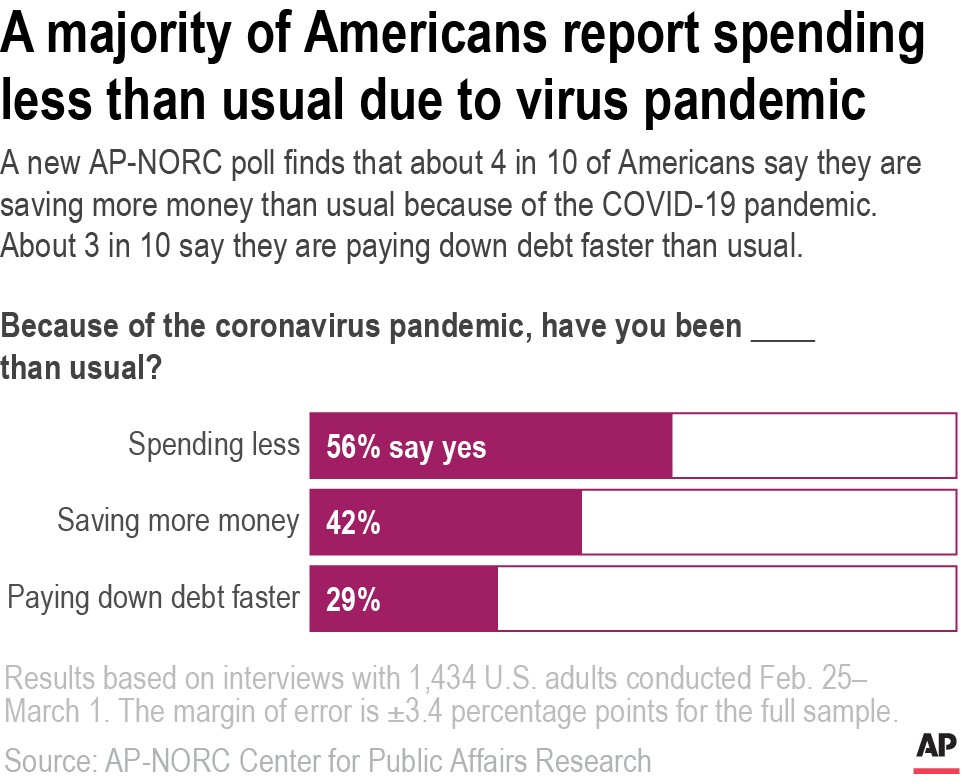 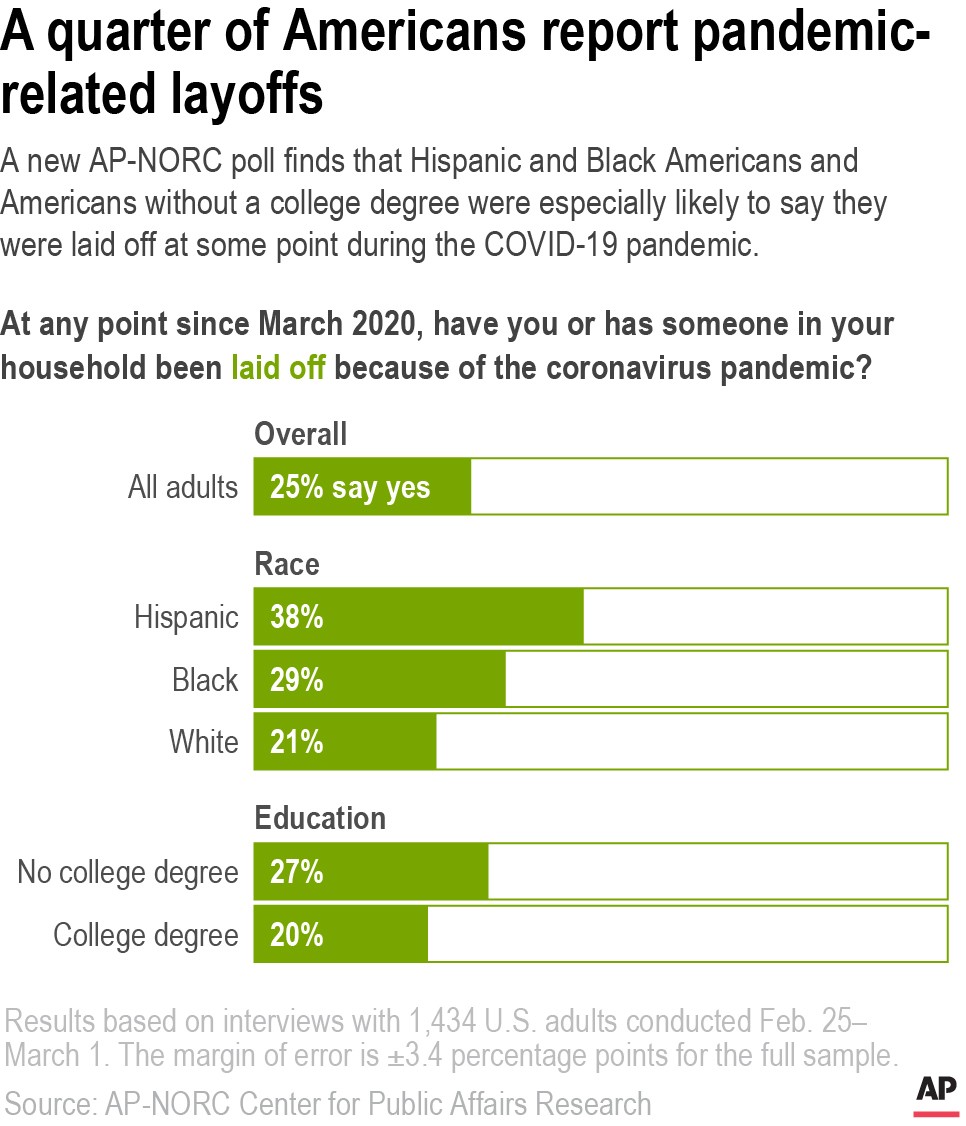 CHARLOTTE, N.C. (AP) — Roughly 4 in 10 Americans say they’re still feeling the financial impact of the loss of a job or income within their household as the economic recovery remains uneven one year into the coronavirus pandemic.

A new poll by The Associated Press-NORC Center for Public Affairs Research provides further evidence that the pandemic has been devastating for some Americans, while leaving others virtually unscathed or even in better shape, at least when it comes to their finances. The outcome often depended on the type of job a person had and their income level before the pandemic.

The pandemic has particularly hurt Black and Latino households, as well as younger Americans, some of whom are now going through the second major economic crisis of their adult lives.

“I just felt like we were already in a harder position, so (the pandemic) kind of threw us even more under the dirt,” said Kennard Taylor, a 20-year-old Black college student at Jackson College. Taylor lost his job as a server in the campus cafeteria in the first weeks of the pandemic and struggled to make rent and car payments while continuing his studies. He had to move back in with his family.

The poll results are consistent with recent economic data. Roughly 745,000 Americans filed for unemployment benefits the week of Feb. 22, according to the Labor Department, and roughly 18 million Americans remain on the unemployment rolls.

The poll's findings reflect what some economists have called a “K-shaped recovery,” where there have been divergent fortunes among Americans. Those with office jobs were able to transition to working from home while those who worked in hard-hit industries such as entertainment, dining, travel and other industries have continued to struggle. The poor have struggled to recover financially compared to the wealthy and Black and Latino households have not bounced back as well as their white counterparts.

Logan DeWitt, 30, kept his job with the government through the pandemic because he could work remotely. But his wife, a childcare worker, lost her job and after months of searching for a new one has returned to school. Their financial situation was further complicated by the fact that their first child was born in the early months of the pandemic.

“We had plans to get a house. Had to scrap that idea, and we consolidated down to just one car. We do a lot of cooking from home and buying in bulk,” DeWitt said.

Thirty-eight percent of Hispanics and 29% of Black Americans have experienced a layoff in their household at some point during the past year, compared with 21% of white Americans.

This recession has been particularly hard on younger Americans, too. Forty percent of Americans under 30 report lower income now, compared to March 2020. About 4 in 10 have been scheduled for fewer hours. Roughly a quarter say they quit their job. Many millennials, who experienced the Great Recession early in their adult lives, are now experiencing yet another major financial crisis.

Congress is about to finalize the Biden administration's $1.9 trillion stimulus package that includes aid for many Americans and business still feeling the impact of the pandemic. Timing is crucial — many of the relief measures passed in the early days of the pandemic, most notably unemployment benefits, will be coming to an end in the next few weeks.

Things are not as dire as they were in the early stages of the pandemic for some Americans, in part because of the previous measures taken by Washington. Also the changes in lifestyle — less eating out, less traveling, no live entertainment — have allowed some Americans to make their financial lives healthier. In the poll, roughly 4 in 10 say they’ve been saving more money than usual, and about 3 in 10 have been paying down debt faster than usual.

Tracie Jurgens, 44, works in the trucking industry. Jurgens said her income evaporated in the first weeks of the pandemic as demand for truckers plummeted. Jurgen’s boss was able to get a loan through the Paycheck Protection Program for small businesses, which he used to purchase new equipment in the summer as things started to recover.

“I don’t know what I would have done if he didn’t get another truck,” she said.

The AP-NORC poll of 1,434 adults was conducted Feb. 25-March 1 using a sample drawn from NORC’s probability-based AmeriSpeak Panel, which is designed to be representative of the U.S. population. The margin of sampling error for all respondents is plus or minus 3.4 percentage points.