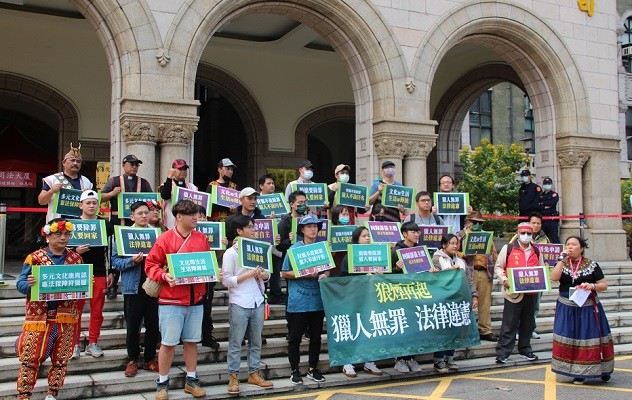 TAIPEI (Taiwan News) — The Constitutional Court on Tuesday (March 9) held a debate on the constitutionality of convictions of indigenous hunters for using firearms to hunt protected animals in eastern Taiwan.

A number of indigenous activists spent the night demonstrating outside the Judicial Yuan, which houses the court, and performed a ritual in the early morning hours leading up to the hearing.

One of the petitioners, an indigenous Bunun man in his 60s named Tama Talum (Wang Kuang-lu, 王光祿), was sentenced to three and a half years in 2013 for violating the Act Controlling Guns, Knives and Ammunition and the Wildlife Conservation Act. He had killed a goatlike Formosan serow and a Reeves' muntjac, a miniature species of deer, with an illegal shotgun.

Talum maintains his innocence, claiming he had shot the animals to provide his ailing 94-year-old mother with fresh meat while she was ill. His sentence was suspended in 2017, and he has since been fighting the conviction with the help of the Legal Aid Foundation.

Article 21-1 of the Wildlife Conservation Act had allowed indigenous people to hunt only when it fell into the category of traditional ritual, and then only with homemade shotguns, unlike the one used by Talum. A 2017 interpretation by the Council of Agriculture and Council of Indigenous Peoples updated the act to permit hunting for food that is shared with members of one's family or tribe as long as the hunter does not profit from it.

Tuesday's hearing saw arguments from Talum and his supporters in favor of interpreting the Constitution to expand indigenous peoples' right to hunt, while government representatives made the opposing case. In addition, they argued there is no constitutional or cultural basis for requiring them to use homemade muzzle-loading firearms, which are accident-prone and can cause serious injury to their users.

At stake are the conditions under which the country's native peoples are guaranteed the right to the cultural practice as well as the balance between this right and constitutionally mandated environmental protection.

The court will issue its decision within one month.