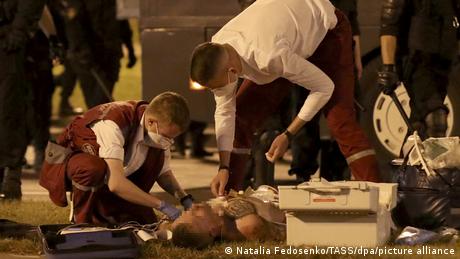 "I was injured near the town where Alexander Taraikovsky was killed," Grigoriy tells DW, attempting a smile. Alexander Taraikovsky was the first anti-government protester to be killed in Minsk. In fact, his death was the first one to be officially recognized by Belarus authorities. Grigoriy has trouble moving the right side of his mouth following his injury. Somewhat sardonically, he tells DW he too almost made it into Belarus history books.

Doctors gave him a 20% chance of survival after his injury left him with traumatic brain trauma. It's a miracle Grigoriy hasn't lost his sense of humor. For safety reasons, he doesn't want to reveal the exact details leading up to his injury, nor his true identity. So what, exactly, transpired in August 2020?

Grigoriy: Back from a coma

It was a warm summer's evening, Grigoriy had finished work and joined a peaceful rally to protest against the country's rigged presidential elections. "You could hardly call it a protest march, people were just standing around on the street," he recalls. "There were a lot of people, I had the feeling all of Minsk had showed up; authorities turned off the internet and people streamed out of their homes."

He describes the atmosphere of being reminiscent of being inside a football station during a match. Then, he says, the police arrived. They began dispersing protesters, who fled into a nearby shop. Grigoriy says he soon left the store. What happened next he cannot say — he simply doesn't remember.

One week later, Grigoriy awoke from a coma in a Minsk intensive care unit. He underwent eight emergency surgeries to save his life. And it took four months until he was finally released from hospital. Initially, his right arm and leg were paralyzed. So, too, the right side of his face, leaving him unable to speak. Fortunately, he can speak again — though pronouncing certain words remains a challenge. His severe injuries have also affected his cognitive abilities. "My aphasia means I sometimes forget numbers," he tells DW, trying to remember his age. "Oh yes, I'm 29."

To Germany for medical care

Grigoriy says he's always had an interest in political events. Yet never, he says, had he publicly voiced his views. "These elections were the first-ever I participated in, I voted for Sviatlana Tsikhanouskaya." Grigoriy says he knew the vote would be rigged, "but I wanted the officials counting the ballots to see how many people oppose this."

To this day, he still cannot use his right arm properly — he struggles to use a computer keyboard, or tie up his shoelaces. Even so, he says, things could have been worse.

The incident, one of his relatives tells DW, did not alter his personality. "When he awoke [from the coma], he asked for a pair of headphones, a tablet and an e-book." Six months after sustaining his injuries, Grigoriy flew to Germany to undergo rehabilitation. There, physio and occupational therapists helped him regain most of his motor skills.

Members of Germany's Belarussian expat community helped organize Grigoriy's stay and treatment. Elisabeth, an IT manager of Belarus decent, was one of them. She's been living in Germany for over 20 years. "After seeing the events of August [2020], I — like so many others — felt I had to do something," Elisabeth tells DW. The events, she says, left her unable to focus on work, sleep properly, and caused her to lose her appetite. "I was constantly watching the news; the best medicine in times like those it to get involved."

Elisabeth got to know like-minded individuals at pro-Belarus marches in Germany, and on the internet. She then established a group to coordinate medical help for injured compatriots.

At first, she says, getting things rolling seemed daunting. Because of the pandemic, Germany has restricted entry for tourists and also medical patients. Visa are granted only to people who have a medical diagnosis, though conducting a throughout checkup from abroad is near impossible.

Asked to comment on the matter, Germany's Foreign Ministry confirmed to DW that it supports measures to help individuals who suffered violence or torture at the hands of the Belarus state to recover in Germany. This includes easing entry to Germany. Last August, Belarus' then-Interior Minister Yuri Karayev apologized for bystanders not involved in the demonstrations for being injured by police. However, he added at the time, such injuries can occur during large scale operations to quell public order violations.

Human rights group Viasna says over 25,000 individuals were arrested between August 9 and the end of 2020. Most of them were released on certain conditions, required to pay a fine, or handed jail terms ranging from 10 to 15 days.

Vladimir: 'A symbol of Belarus' protests'

Vladimir is another protester who was granted a visa to receive medical treatment in Germany. Like Grigoriy, DW cannot reveal his real identity due to security reasons. His ordeal began after meeting friends in Minsk and he went to catch a cab. At the time, Vladimir was wearing a sports jacket emblazoned with the Pahonia, the country's historic coat of arms. The red and white emblem soon came to represent the Belarus opposition movement.

"Police officers — about seven individuals wearing helmets and armed with machine guns — came towards me," Vladimir tells DW. "They told me to get on my knees." Then, he says, the officers broke his arm and his blacked out from the pain. "When I came to, an ambulance had arrived to take me to hospital." It turns out his shoulder was broken. "There, I underwent surgery and they implanted a plate." At first, he recalls, he could not move his right arm at all.

After his release from hospital, Vladimir learned two charges had been brought against him — one for hooliganism, the other for disobeying state officers. Vladimir refused to plead guilty. As his court dates kept being postponed, he decided to leave the country, fearing repercussions. He was also keen to receive proper medical treatment for his arm. Members of Razam, a political organization made up of Belarus expats in Germany, helped Vladimir obtain a humanitarian visa for the country.

Therapy for the soul

Vladimir is still shocked that the symbol on his jacket provoked such a brutal attack. "In the moment, I completely forgot I was wearing it; it did not cross my mind that in this country my clothes could spark such aggression."

Vladimir hopes he may extend his visa and continue his outpatient treatment in Germany. He's optimistic about the future. "I have a positive outlook and feel my arms is on the mend."

The Germany-based Belarus volunteers, meanwhile, are keen to help fellow compatriots who've been abused by Belarus police. "Unfortunately," Elisabeth says, "our help is still needed." Adding that "this is not only therapy for patients, it's also therapy for me — it feels great to do something useful to help others."

This article was translated from German by Benjamin Restle.